A new approach to making influenza vaccines, based on mathematical models developed at the University of Oxford, could result in the development of a vaccine which will potentially protect people against influenza for a lifetime. 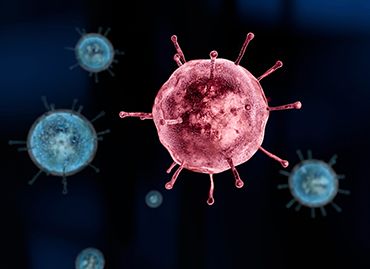 Influenza (flu) is a serious respiratory virus which affects the entire globe. The World Health Organization estimates that flu causes up to five million cases of severe illness and as many as 650,000 deaths every year. Periodically a pandemic strain emerges, such as the ‘Spanish Flu’ of 1918, which caused between 50-100 million deaths.

Influenza is regarded as a highly variable virus, able to mutate and escape the immunity which builds up in the population from its circulation in previous seasons. However, most flu seasons are dominated by a limited number of virus strains. This paradox has confounded scientists for years, since logically a highly variable virus should produce a wide variety of different ‘offspring’.

Mathematical models developed at the University of Oxford over a decade ago suggested a controversial solution. Prof Sunetra Gupta and colleagues theorized that some parts of the flu virus targeted by the immune system are, in fact, limited in variability and act as constraints on its evolution. The various forms of these regions would reappear and disappear as the immunity built up in the population by influenza infection changed over time.

Further work conducted by Dr Craig Thompson in the group showed that these regions do indeed exist and do direct the evolution of the flu virus. In addition, the team demonstrated that the regions play a key part in any immunity we have against influenza: astonishingly, tests showed that young children had immunity to historical influenza strains that they could not possibly have experienced, one of which last circulated in 1934.

Existing flu vaccines target regions of the virus which change rapidly. These vaccines need to be redesigned and redistributed every year while typically providing protection to only 50% of vaccinated individuals. In contrast, by targeting these newly-discovered less variable regions, a vaccine can be produced which protects against all strains of influenza, potentially for a lifetime.

The first of several patents was filed in 2016, in collaboration with Oxford University Innovation (OUI). Now Blue Water Vaccines, a US-based start-up company, has licensed the patents and is raising $15m to support commercial development of a vaccine – the biggest licencing agreement in the history of OUI. This will enable the vaccine to be developed further and taken through clinical trials.

This breakthrough could effectively spell the end of a virus which has killed tens of millions of people. The approach has to the potential to be applied to other previously intractable viruses such as the common cold and HIV, and could revolutionise the way vaccines are developed.