Blow-up in Bissau | University of Oxford
Skip to main content

A photographic exhibition organised by Dr Ramon Sarró and colleagues has helped re-establish the National Ethnographic Museum in Guinea-Bissau. 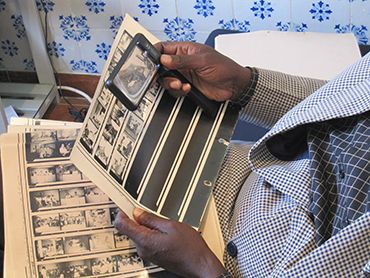 Dr Ramon Sarró and Blow-up in Bissau.
A Portuguese colony until 1974, Guinea-Bissau in West Africa is a country of enormous linguistic, cultural, and religious diversity – a diversity that was richly reflected in the National Ethnographic Museum which opened in 1988.

“The Museum celebrated the ‘unity and plurality’ of the newly independent country and focused its collection on everyday objects, religious items, masks, textiles and artefacts that represent people’s beliefs and how they live,” explains Sarró. “The only museum in the country at that time, it was a popular destination for day trips and family outings.”

Sadly, the Museum was destroyed when it was used to billet Senegalese soldiers supporting the government during the 1998-9 civil war. When the war ended, it reopened for a few years but fell into disrepair. Eventually, the remaining objects were taken to the Directorate of Culture but kept in a back room and not displayed.

In 2012, Sarró came across a temporary display of objects from the Museum and heard rumours about photographs of the former collection. Enquiring about these he met Dr Albano Mendes, now Director of the Museum, and found a stack of contact sheets (thumbnail images that can be viewed to select the photos to print from negatives). The sheets contained more than 400 images, including photographs of artefacts in the museum and being used in local communities.

Sarró realised the potential of the contact sheets, which could be scanned and blown up to create full-size images. Working with Mendes and Ana Temudo, a young Portuguese museum scholar eager to collaborate with post-colonial African museums, he began to prepare the exhibition Ethnographic Museum of Guinea-Bissau: 30 years of history, curated by Temudo.

“We opened on 15 September 2017,” says Sarró. “On the same day, the Minister of Culture declared that the museum would reopen, permanently housed in the Directorate of Culture. There is a beautiful symmetry in this as the building used to be the old colonial museum and has now been repurposed to celebrate indigenous culture.”

Since 2017, the museum has focused on gathering more items from all parts of the country, which has become a collective process of remembering and celebration. New photos have been donated which document the war of independence, a newly discovered video collection is being digitised, and other researchers have offered to donate images and objects.

The Museum is again regularly visited by tourists, families, and school and university students. “The reopening of the Museum is hugely important for national solidarity and identity,” says Sarró. “People in Guinea-Bissau live in a difficult equilibrium between conflict and peace, longing for an ideal they often express as ‘conviviality’ – the space to enjoy peace and to prosper. The museum clearly contributes to creating such conviviality.”

Sarró, Temudo and Mendes have now co-authored a popular book, featuring text and images from the exhibition, while Blow-Up in Bissau, held at the Pitt Rivers museum in Oxford from December 2019 to May 2020, brought the exhibition to new audiences in Europe.

Involvement with the museum has also been hugely important to Sarró himself. “Ten years ago, I would have said I didn’t care about museums in Africa… that I wanted to do direct research with communities,” he explains. “Now I realise museums are more than just places to store objects – they’re ‘factories’ of ideas, knowledge, research, and creativity. Now I can brainstorm research questions with my partners in Guinea-Bissau and they help display and curate the findings. It’s a beautiful outcome and means everyone can engage with, learn from, and enjoy the research and culture of this diverse country.”

Dr Ramon Sarró is Associate Professor in the Social Anthropology of Africa and Fellow of St Antony's College, University of Oxford

“The Museum is very grateful to Ramon Sarró and Ana Temudo whose collaboration with us made it possible for people in Guinea-Bissau to again visit their rich cultural heritage in this beautiful building. The President visited the museum a month ago and expressed his satisfaction that this diverse country is able to display the culture of its many regions together in the Museum.”