The IntoUniversity scheme raises awareness of the benefits of higher education among pupils in Blackbird Leys, Oxford

The University’s commitment to improving educational outcomes for young people across the city.

The University has a long-standing partnership programme of initial teacher education, from which almost a third of the student teachers each year take up posts in local (state-funded) schools.

The Oxford Education Deanery was opened in 2013 to support teachers’ continued professional learning and to help them engage with relevant research.

Support for teachers is offered in a variety of ways 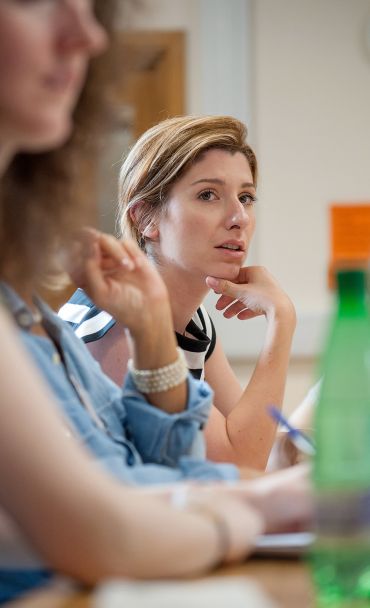 Teacher on a professional development course
It may mean helping them develop their own subject knowledge by putting them in touch with University specialists, or helping them to access recent research on teaching methods.

The Deanery’s programme includes induction for newly qualified teachers, and an ‘enhanced’ part-time Master’s in Learning and Teaching.

These different projects are underpinned by a network of Research Champions – one nominated teacher from each secondary school in Oxford, supported by the Deanery – who can advise their colleagues engaged in implementing and evaluating initiatives in school.

The two latest research projects (supported by the University’s John Fell Fund) are focused on developing assessment tools for those pupils learning English as an additional language, particularly to smooth the transition from primary to secondary school, and on the ways in which teachers can collaborate most effectively to improve outcomes for the most vulnerable learners.

More information about the Deanery.

The Department for Continuing Education: Extending teaching to adults

Oxford University was a pioneer in making university education available to working adults. In 1878 Oxford University Extension started as a programme of lectures delivered around the country. Women formed a high proportion of those attending. In 1888 the first summer meeting brought 900 of these ‘extension’ students to Oxford to for a week of intensive study. 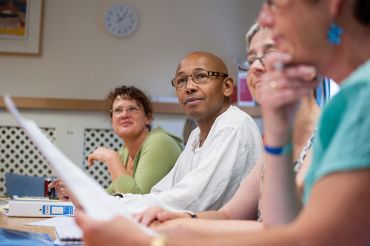 Students continuing their education
This initiative grew into today’s Department for Continuing Education, now based at Rewley House in Wellington Square. Approximately 14,000 students enrol annually; the courses are designed specifically for those who want to study part time while maintaining a career or family.

More than 1,000 courses are taught each year, from one-day events through weekly evening classes to full degree programmes. They can consist of anything from a weekly French class to a master’s degree in sustainable urban development, an online course in mathematics or continuing professional development in telecommunications.

Most of the longer courses lead to a University award or other forms of credit. For those who wish to learn without the objective of gaining further qualifications a large number of short courses is on offer, lasting from one day to several weeks.

The majority of face-to-face courses are held in Oxford, and the department also has several other centres offering part-time courses. There is an extensive programme at the University of Reading, and smaller programmes in towns such as Maidenhead, Newbury and Milton Keynes. For those who require distance learning, online courses now make Oxford’s teaching available at a time and place to suit the student.

More information about the work of the Department for Continuing Education. 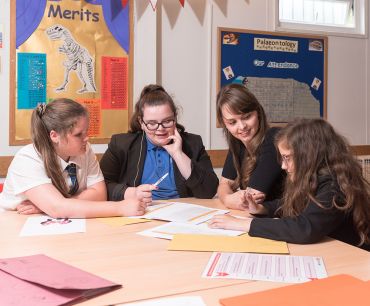 Schoolchildren with an IntoUniversity mentor

Oxford has a thriving learning centre in one of the city’s most deprived regions. Launched in 2014 and based in Blackbird Leys, the IntoUniversity Oxford South East is a collaboration between the University of Oxford and one of its colleges, Christ Church; and the charities IntoUniversity and The Queen’s Trust.

The centre provides mentoring, academic support and aspiration-building programmes for 900 students. The team at the centre works closely with local schools and community organisations to support pupils aged seven and upwards with their homework and to provide guidance and advice on university applications and subject choices for GCSE and A-level. Up to 80 student volunteers from Christ Church and the University contribute to the project as mentors, tutors and role models.

The centre programme consists of:

An additional programme known as Into Oxford supports gifted students from IntoUniversity centres between years 10-13 with sustained support focused on study skills, critical thinking and guidance on making a competitive applications to a selective university.

The University is full of enthusiastic experts, eager to share their passion for learning with the wider public. Here are just two of the current projects.

The University’s Physics Department hosted its first Stargazing Oxford event in January 2012 – open to everyone, with free admission. Picking up on public interest following the BBC’s Stargazing Live programmes, it included rooftop observing sessions, an inflatable planetarium and hands-on ‘astrocrafts’ sessions for ages six and above. 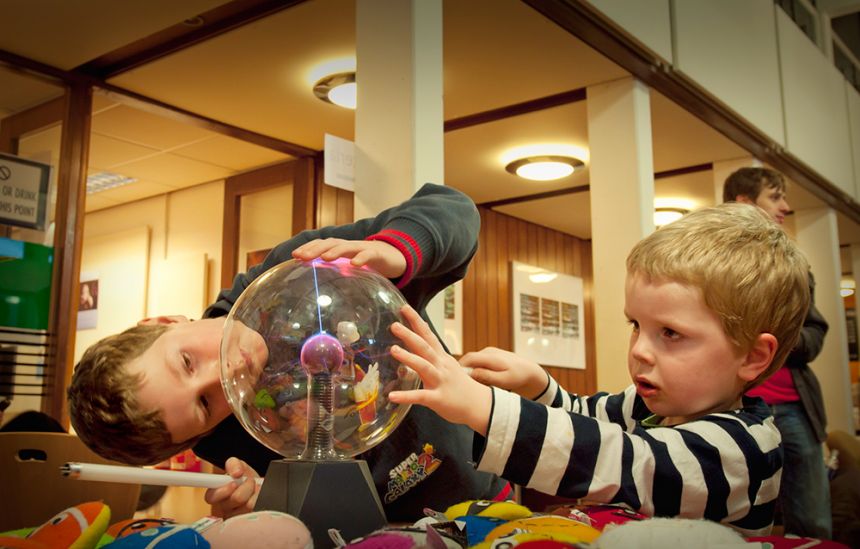 The aim was to reach out to people in the local community who might not have been to a University event before, but who were interested in astronomy and keen to know more. Oxford researchers from the Departments of Physics and Earth Sciences were there to meet the public and answer their questions.

Running every January, Stargazing Oxford typically attracts over 1,000 visitors, with around 80 University volunteers helping out. Physicists from the University also go out and about to other local science festivals, working with Science Oxford and local astronomy societies to bring the latest in space science to the people of Oxfordshire.

Stargazing Oxford is currently on hold.

A chance to learn Latin

Latin is a fascinating subject for anyone interested in words, ideas, history and culture. Oxford University’s Faculty of Classics is helping a local education charity to make it more widely available within the city.

Latin, with the wide array of topics it covers, has virtually disappeared from state schools in Oxfordshire. Dr Lorna Robinson, who studied Classics at Oxford, is determined to change this.

In 2013 she set up the East Oxford Community Classics Centre, run through her educational charity the Iris Project (founded in 2006) and hosted by Cheney School. The centre runs public courses, special events and workshops for all ages.

The University’s Classics Outreach Officer works closely with the Iris Project, supplying many and willing volunteers from among the faculty’s undergraduates, postgraduates and academics.

As well as helping with special events and public courses, they support the project’s Literacy Through Latin scheme which has been teaching city primary school children aged 9–10 since 2006 using engaging activities, games, storytelling and drama to introduce Latin and classical culture. The programme has been shown to improve literacy as well promoting confidence and communication skills amongst pupils.

More information about the Iris Project.