Enid Starkie, Fellow and Tutor in Modern Languages, gives a lecture in Somerville College in 1944

The centenary of women’s full membership of Oxford University: celebration and critical reflection

2020 sees the centenary of women's right to matriculate and to graduate: to become, in other words, full members of the University of Oxford.

It is an occasion to celebrate the multiple ways in which women have contributed to the University and women graduates have made a mark in the world. It is also a moment at which to commemorate those scholars and campaigners who provided the impetus for this change.

But it is also a time for critical reflection and challenge. The first women's colleges - Somerville and Lady Margaret Hall - were founded in 1879. St Hugh's and St Hilda's followed in 1886 and 1893, with St Anne's established in 1879 as a society for home students, who could not afford the expense of the other foundations.

Annie Rogers got a 1st in 1877 in Latin and Greek in the degree-level 'Examinations for Women' which had been set up in 1875 (she was the only candidate). In 1879, she got a 1st in Ancient History, and she became Oxford's first qualified woman tutor. Women in the new women's colleges attended University lectures and took University exams. Yet they were not full members of the University, and their qualifications were not formally recognised until 1920. Viewed from this perspective, it is the delay rather than the achievement which is striking.

Oxford, in fact, took far longer to grant women degrees than almost any other university in Britain. Only Cambridge was slower: although Girton College had been founded in 1869, full degree status there had to wait until 1948. In 1920, the distinguished Cambridge classicist Jane Harrison bemoaned the fact that it was 'So like Oxford & so low to start after us & get in first!' In London, by contrast, the first degrees for women were granted in 1878. In nearby Reading, women formed a majority of students by the time Oxford finally, formally acknowledged women's membership of the University.

Fears for an all-male environment

This tardiness seems all the more extraordinary when those heading the campaign for degrees made such a strong intellectual case, and worked so hard and carefully to reinforce it. Indeed, Dorothea Beale's initial intention that St Hilda's should be a place for serious study free from the expectation of taking exams came under fierce attack from the heads of the other women's colleges who saw that this (from some perspectives a more radical plan) would risk undermining their collective argument for degrees. And St Hilda's in fact came to follow the same pattern as the other women's colleges. So why did it take so long for degree status to be granted?

Part of the explanation lies in the fears engendered by women's presence in a previously all-male environment. In 1896, during a debate in Congregation on degrees for women, weekly satirical magazine Punch encapsulated the problem in a cartoon which showed the Greek goddess of wisdom trying to enter Oxford, but finding her way blocked by a college don. 'Very sorry, Miss Minerva', he explains, 'but perhaps you are not aware that this is a monastic establishment'.

At the same time, male undergraduates expressed anxiety about an 'invasion of the Amazons'. Academics similarly described their doubts about the imprudence of coeducation. 'It does not matter if boys will be boys', observed a fellow, 'so long as one can prevent girls being girls'. In 1914, just six years before degrees were finally granted, the head of one women's college felt compelled to write to her students warning them of 'a very tiresome complaint that the men examinees are disturbed by the way our students sit in their tight skirts and show their legs'. 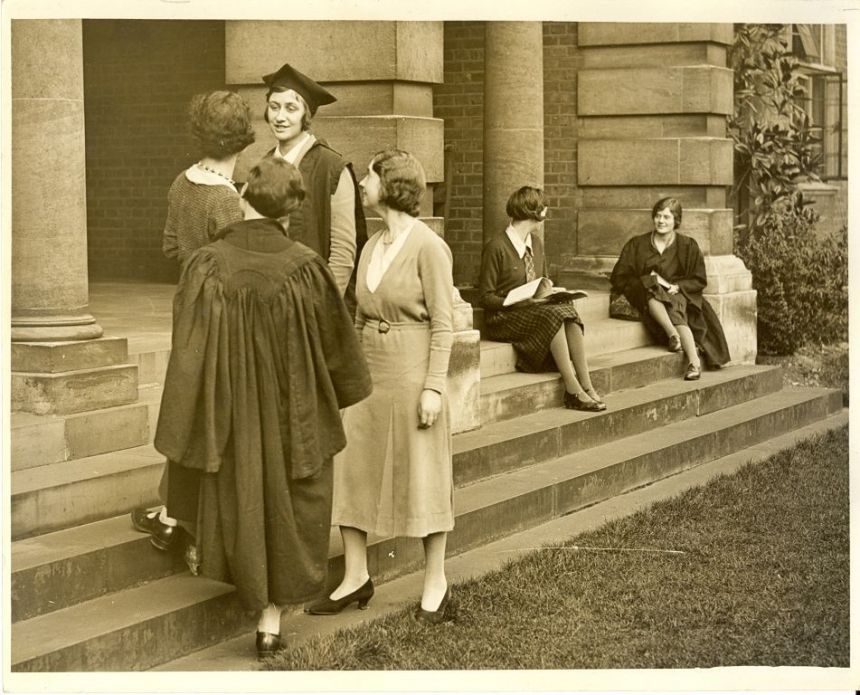 Above all, men at Oxford opposed reform because of their reluctance to share power with women. Admitting women to degrees in Oxford carried with it membership of University committees and boards, including Convocation and Congregation – the ultimate institutional governing body. Graduates were entitled to elect two MPs to represent the University in parliament until 1950. Indeed, when the degree statute was put forward in 1920, its contingency was emphasised: it 'did not proceed on any principle of abstract equality', but now that the parliamentary franchise was 'settled', there seemed no good reason to resist the change. (In fact, the franchise itself remained substantively unequal: in 1918, while the suffrage had been opened up to all men over 21, only women over 30 who met a property qualification had been given the vote; not until 1928 were women's voting rights on the same basis as men's.)

In response to Cambridge's failure to follow suit in granting degrees to women in the 1920s – and indeed their assertion of themselves as a more masculine institution by formally limiting the number of female undergraduates (Annie Rogers was told that there was 'a Cambridge propaganda to get boys for themselves by representing Oxford as socialistic, weak in athletics and bewomaned') – a 'limitation statute' was passed in Oxford in 1927 to restrict the number of women students to no more than 840 (roughly a sixth of the University's undergraduate body). This quota (although raised to 970 in 1948) was not lifted until 1957.

So – just as was the case with the extension of the parliamentary franchise in 1918 – women's admission to 'full membership' of the University in 1920 was qualified.

Remarkable women – individually and collectively – have shaped the collegiate University. Yet constraints on complete access to power remained – and remain. Ongoing efforts of staff and students (as well as changes in the legal and policy environment) mean that issues of equality, diversity and inclusion now feature more prominently, not just in formal policies and procedures but in informal institutional and collegiate cultures. The process of enabling full equality – in particular in terms of race, ethnicity, religion, class, disability, sexual orientation, as well as gender identity – has continued to be slow. The University is not unique in this respect, but it has distinctive scope to conceive progress and to work for it.

The centenary of women's degree status provides a welcome opportunity to bring these issues to the fore and to debate new ways of developing constructive critiques and of galvanising change.