The University is committed to supporting the arts, including commissioning art for new and refurbished buildings, and providing funding for artists-in-residence, exhibitions and research projects.

An example of this is the Radcliffe Observatory Quarter (ROQ), where the Radcliffe Infirmary and Outpatients buildings were restored and the 20th century parts of the hospital that were in poor condition were demolished and replaced with buildings for the Mathematical Institute and Blavatnik School of Government.

Oxford City Council’s planning guidance stipulates that public art should be commissioned as part of all new capital investment schemes ‘in the interests of visual amenity’. Find out more below about the new artworks created for the ROQ site and the original artefacts that have been kept. Weimin He, ROQ Artist-in-Residence (2009 to 2015) followed the demolition, renovation and construction work to provide a record of the development of the site for posterity in drawings and woodcuts. His vivid, characterful drawings were created with ink and brush on xuan paper or Chinese album leaves, a traditional format of Chinese painting going back as far as the Tang dynasty (618–907). Single leaves are collected into an album which can be viewed as a book, but also opened to be up to 12 meters long. Weimin has exhibited worldwide, including at the British Museum, the Metropolitan Museum of Art and the China National Museum of Art.

Simon Periton was awarded the ROQ Artist’s Fellowship with a brief to develop a piece for the site. His Alchemical Tree was unveiled in November 2015. Cast from an ash tree in Norfolk, the tree is made from resin with a specialist silvered finish. It symbolises growth, transformation, and a quest for knowledge. A gold crown hooked around the trunk represents the successful attainment of a higher state, a realisation of perfection.

Oona Culley was chosen to develop an artwork for New Radcliffe House on the ROQ, home to the Jericho community health centre. Her artwork — Branching Forms — was installed in 2013, and extends from the exterior glazing of the main entrance into the building’s interior and reception area, connecting the natural landscape outside with the interior landscape of human anatomy: images of tree branches transform into blood vessels and complex cell structures as you move through the building. 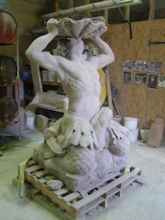 In addition to new works, a number of artefacts from the site have been kept – sometimes in new locations. These include: