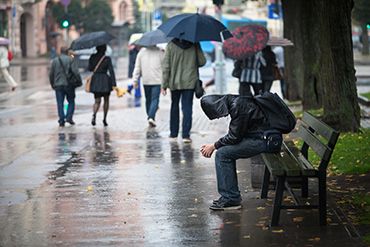 CTOs provide a legal means through which people with severe mental illness can be made to accept treatment while living outside of hospital.

Paul is a 37-year-old man with a history of mental illness. He enjoys football and regularly meets with friends at the pub to watch the game. On weekends he takes the bus to Brighton to visit his girlfriend. Paul has been admitted to hospital many times on account of his poor self-care and “odd” behaviour when very unwell, but he usually goes home after a few weeks when his symptoms subside.

Last time was different though. Instead of returning to his everyday life when discharged, he was told that he would have to meet with a nurse every week, accept medication by injection and stop drinking. If he did not meet these conditions, he was told, he could be taken back into hospital at any time.

You’ve probably heard of being “sectioned”, whereby people with mental health problems are involuntarily hospitalised under the Mental Health Act. But you may not have heard of community treatment orders (CTOs), a younger cousin of involuntary hospitalisation. CTOs provide a legal means through which people with severe mental illness can be made to accept treatment while living outside of hospital. Despite a lack of evidence for their effectiveness, they are still widely used. Nearly 5,000 people are placed on CTOs in England each year.

First introduced in the US in the early 1970s, CTOs now exist in dozens of countries including Australia, New Zealand, Canada and the UK. They came into effect in England and Wales in 2008.

CTOs are intended for people who have been taken into hospital many times before. The idea is that once the person leaves hospital, the CTO will encourage them to engage with health services and take their medication, thereby reducing the risk of relapse and readmission to hospital.

CTOs allow certain obligations or “conditions” to be placed on the patient, for example, to live at a certain address or to abstain from alcohol. If the conditions are not met, and their doctor believes they are becoming unwell, then the patient can be recalled to hospital for an assessment. Because of the legal powers of CTOs, a patient who refuses assessment can be forcibly brought to hospital by the police.

The use of CTOs is controversial. Critics and civil liberties groups have described them as paternalistic and discriminatory, likely to increase the overall levels of coercion used in psychiatry and further diminish freedom of choice for people with mental illness.

Much of the controversy and debate surrounding CTO use concerns their effectiveness. If CTOs could be shown to reduce relapse or improve clinical or social outcomes for patients, could their use be justified?

So far, there is little evidence that CTOs achieve any of their intended aims. Three randomised controlled trials have found no support for CTOs in their main outcomes, including readmission to hospital, clinical symptoms, and service use. Examining a wider range of outcomes, including quality of life, substance abuse, employment, and satisfaction with services, did not show any benefits for patients on CTOs either.

Meta analyses (studies which pool the results of other studies) have concluded that there were no significant differences for patients on CTOs in terms of hospital admission rates, social functioning or symptoms when compared with standard care. Other review studies have come to similar conclusions.

Most studies of effectiveness have been rather short (one year or less), so might CTOs confer benefits in the longer-term? A follow-up study found no evidence that CTOs lead to improvements in any outcomes over a three-year period.

What about protecting the public from dangerous patients? When compared with good community mental health services, CTOs are no better at reducing levels of violence among mentally ill patients living in the community. That said, one study from the US did find that patients on CTOs were less likely to become victims of crime.

Some have argued that in light of the evidence CTOs should be stopped. Others have called for mental health professionals to “think harder” before using them while calling for larger, better controlled studies.

Despite mounting evidence that CTOs offer no benefits, there have been no changes to mental health act legislation governing their use in the UK. Even the Royal College of Psychiatrists, an advocate of evidence-based practice, has not sought to discourage their use. Why?

There are many reasons. It has been noted that CTOs may simply make life easier for mental health professionals working in overstretched services. Patients can be brought back to hospital with fewer administrative hurdles and medication can be enforced through legal mechanisms rather than through putting in the work of building a therapeutic relationship. CTOs may also serve as a legal safeguard for health professionals caring for high-risk patients: were such a patient to commit an act of violence, then it could be argued that “every reasonable precaution” had been taken to protect the public.

CTOs in their current form are not supported by the evidence and appear to function more as a means of social control than therapeutic gain. Their continued use should be reconsidered.