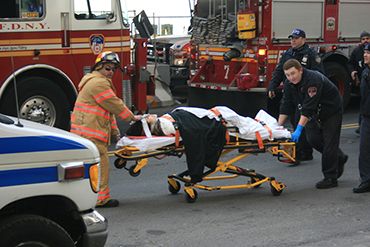 Some people seemingly can deal with anything. They save a stranger from bleeding out in a bombed restaurant, protect passers-by from heavily armed gunmen, pull dead and dying people out of collapsed buildings, and they keep going because it is their job. These people are first responders.

When trauma goes on for days, as it has recently in Paris, however, the odds of them bouncing back from the violence, death and injury they are witnessing rapidly diminishes. They are at greater risk of developing a severe stress reaction known as post-traumatic stress disorder (PTSD).

One study found that the worldwide rate of PTSD among first responders is 10%, much higher than the 3.5% rate among those not involved in rescue work.

Tetris to the rescue

So how best to address the problem? Research is in its infancy, but there are some promising studies. Emily Holmes’ group at the University of Cambridge has been looking at the benefits of playing Tetris, a video game, after a traumatic experience. The idea is that this could block the consolidation of traumatic memories so they don’t “flash back” later on.

For the study, her team first traumatised people by showing them distressing footage from public safety videos. The next day they invited them back into the lab to reactivate the memories with still images taken from the videos. One group then played Tetris for 12 minutes while the other sat quietly. Over the following week, the group who played Tetris had about 50% fewer unwanted memories from the films compared to the group who didn’t.

The team concluded that playing Tetris helps because it soaks up a person’s visual processing capacity, making it harder for the brain to consolidate the visual parts of a traumatic memory.

Since it takes about six hours for the brain to cement a memory, the key is to play the game soon after trauma or within six hours of re-activating the traumatic memory. How long the helpful effects of playing Tetris will last and whether it will translate into helping people after real-life trauma is still unknown.

Other techniques, such as “updating”, taken from a highly-effective talking treatment for PTSD, may be more practical and easier to implement.

Like a detective, updating is a technique that focuses on finding new information and linking it to the case, the past memory. This is necessary because when the brain and body are in survival mode during trauma, the mind finds it difficult to encode all the relevant facts. Often key pieces of information that could make the memory less traumatic are lost. Updating links new information to someone’s memory of their trauma to make it less upsetting.

But can updating help to reduce unwanted memories after trauma?

We carried out a study, published in PLOS ONE, in which we traumatised people by showing them terrifying films of humans and animals in distress. We then divided our participants into three groups. One group watched the films again but were given new information about how long people suffered and whether or not they lived or died – essentially, they were updated. The second group watched the same films again but without the new information. And the third group watched films of humans and animals who were not in distress. The updated group had fewer traumatic memories and PTSD symptoms than the other two groups.

Updating is now being used by some UK emergency services. First responders will gather after critical incidents and update their memories of what happened before they go home.

There are other techniques that may be helpful. One study found that depriving people of sleep may be useful in the aftermath of trauma.

But the same study found that a week after the trauma, people who had been deprived of sleep had the same number of unwanted memories as people who had slept well afterwards. Consequently, it remains unclear whether there would be any long-lasting benefits using this method. There are, however, certainly health risks linked to lack of sleep.

Still looking for a solution

To develop preventative interventions, we need to study newly-recruited emergency workers who haven’t yet suffered on-the-job trauma and follow them over time, spotting which “coping styles”, present before trauma, may predict their reactions afterwards.

For example, some people naturally react to stressful life events by dwelling on them, thinking about why they happened for hours on end. This strategy, called rumination, has been linked to PTSD in people who survived car crashes.

If rumination predicts PTSD in first responders, then preventative interventions could train people to spot when they are dwelling on an event and refocus their attention to the task at hand.