Smallpox was globally eradicated in 1977 – This map shows the year of eradication of Smallpox.
For more information: www.ourworldindata.org

I cycle down a dark, rainy Broad Street to meet Max Roser at the Oxford Martin School, a building formerly used by the History Faculty and situated opposite the King’s Arms.

Max Roser is originally from Germany; he studied in Austria and then briefly in Brazil before coming here to work at the Institute for New Economic Thinking. His previous studies (in Philosophy and Geo Sciences) left him with a pessimistic attitude to the future. What’s interesting about economics, he tells me, is that it’s quantifiable, and that it gave him a different perspective and attitude towards our situation today. His latest project, www.ourworldindata.org, visualises datasets of global trends across time. The underlying message from the project is Good News: the world today is more peaceful, educated and healthier than ever before.

'I used to be a pessimist,' Max tells me, 'but the data shows the world improving.'

By way of illustration, Max shows me one of his visualisers — it shows the global rise of education over time. You can see vast advances in the average number of years spent in education worldwide, with most notable increases in the east and more recently, Africa. This Good News message is not unique.

'We hear about violent murders and homicides in the news all the time,' Max remarks, 'and that can give you a very fractured sense of how things actually are.' Again, by combining openly available datasets, Max shows empirically that the number of homicides is lower than it has ever been (despite global population numbers being much higher.)

There is no more succinct summary of the findings and message of Max’s work than his introductory piece on his site:

'The empirical view of our world shows how the Enlightenment continues to make our world a better place. It chronicles how we arebecoming less violent and increasingly more tolerant. The data displays how new ideas continue toimprove living standards, allowing us to live a healthier, richer and happier life. It is the story ofdeclining poverty andbetter food provision in a world we care about.'

What’s interesting about Max’s research is that it goes beneath the surface of traditional metrics of societal success: 'the success of a country, or even the world, isn't just to do with GDP, GDP is a means to an end. But the end itself is health, education, peace. The quantitative force of my work allowed me to explore this from existing, but sometimes obscure, datasets, and aggregate and make that broadly accessible.'

When did your perspective change on how optimistically you viewed the present day?

'As an undergraduate I studied Philosophy and Geo Sciences in Austria. Although both fascinating in their own way, they can paint a fairly negative picture of the world. For example, the idea of decline is part of the cultural heritage of continental Philosophy; and Geo Sciences rightly focus on the serious environmental risks that we face. I then took up a Master's in Economics, which gave me a much more empirical understanding of the history of living standards and understood how positively many aspects of our world change. It also brought me to Brazil for six months. Culturally, it’s a fascinating place, but also the amount and speed of change was something I’d never experienced in Europe. I think it was there that the idea for www.ourworldindata.org first came into being.

'It’s harder to notice progress in Europe because that progress extends over more than two centuries. In Brazil, it’s obvious that the younger generation’s living standards are much better than their parents’. Poverty is falling rapidly, education and health are much better than before – and Brazilians are very energetic, very optimistic and expect that things will get better in the future.'

It’s an intriguing insight into what sparked this unusual standpoint on life today. How did you go about publicising your work?

'I was working on it for about a year and a half behind a password-protected site, until I could get it to a state that I wanted to go public with,' Max tells me 'I released the URL in early June and since then the attention it’s received has been incredible.'

'Twitter has been particularly powerful at spreading the content – it’s a great medium for sharing compressed or visualised information. Some of the most prominent public intellectuals in my field have tweeted my work, including Steven Pinker, Hans Rosling and the Freakonomics team.'

Astonishing visualizations of how our world's changed- No educated person shd be ignorant of these trends @maxcroser http://t.co/1KwQMOqyB3

'In total, my posts have reached around half a million in the last 3 months. That buzz has in turn generated press articles; these last 3 weeks there have been more than 30 on vox.com, Business Insider, as well as Bloomberg, an NPR radio interview and many non-English speaking articles.'

How did you come to Oxford, and what role did that play in the development of your research?

'I’m incredibly grateful to Sir Tony Atkinson, a professor who is working here in Oxford and is focusing on poverty, inequality and the history of living conditions. We worked together on the idea of making long-term trends of living standards available in a visual form – and he set me on the path that led to OurWorldInData. He’s been a great supporter from the first ideas more than 2 years ago and continues to be very helpful – an absolute expert on measurement of living standards and very cautious and exact.

'During the project’s development I was working at the Programme for Economic Modelling (EMoD) headed by Sir David Hendry, the former head of Economics at Oxford. David was very enthusiastic about this project from the first time I told him about the idea. He thinks that empirical research should be available to a larger audience and thinks that the perception of most people is much too negative.'

'I now work for the Institute for New Economic Thinking (INET), Oxford Martin School, under the Employment, Equity and Growth Programme, headed up by Professor Nolan. In the team with Professor Nolan we are studying the growth and distribution of incomes and living standards – OurWorldInData.org is a good way of communicating what we know about growth and distribution of income and living standards to a larger audience.'

My time is nearly up and it’s been a fascinating discussion of the message of progress that contrasts with the bad news we often hear. Do you know where you intend to go from here?

'Because of the interest in the project, we just received funding for one year. Now we have the chance to expand it and turn it into something really useful. I've just received funding for 2 researchers to help me: a computer scientist to help me visualise the data in new and more interactive ways, and another with a background in quantitative social sciences or specifically economics to work with me to help collect new data sources.'

So if things really are getting better, why do we so rarely hear it? We’re living longer, eating better and are more educated than ever before – why is the message in the media so starkly different? What is it in human psychology that makes us hone in on anomalies to positive trends, and do we stand to benefit in any way from a disproportionate focus on disaster and misfortune?

To get some answers to these questions, I’ll be speaking to Rasmus Nielsen at the Reuters Institute for the Study of Journalism – an institute which describes itself as bringing 'the depth and rigour of academic scholarship of the highest standards to major issues of relevance to the world of news media. It is global in its perspective and in the content of its activities.'

OurWorldInData is based in and supported by the Institute for New Economic Thinking at the Oxford Martin School and funded by the Nuffield Foundation.

Funding from the Nuffield Foundation has allowed Max's team to expand and he is looking for a quantitative social scientist and a web developer. 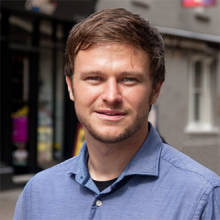 Other 'Our place in the world' conversations: