A determined group of friends at Oxford University founded Onfido, a successful start-up that has raised $4.5 million in funding to help it grow in new markets (particularly the US). Onfido offers a service that automates background checks on prospective employees before they are accepted for work. The company CEO, Husayn Kassai, talks about his experience at Oxford, creating the technology and the experience of working with the University’s network and resources (including the University-owned technology transfer company Oxford University Innovation) to turn his research into a business product.

How did you three meet?
'Eamon and I knew each other from the course. I invited him to join the Oxford Entrepreneurs society. Then at one point I became President and Eamon was Vice-President. I met Ruhul when I was looking for a software engineer as part of a larger team – Ruhul was always very good at engineering and was programming in his spare time. I’d worked with other software engineers before working with him, but working with him I just got on so well we became friends. We’ve been working together ever since.'

When did you first start working on projects with your Onfido co-founders?
'It’s a series of experiences. My first company was called Reference Box; that’s what I did in my first year at Oxford (in 2009). Reference Box was a third-party independent source for you to collect your references from your tutors and then, when you apply for a job, you send your references along with your CV. I thought it was cool, but it didn’t work out because employers wanted up-to-date references specifically written for them. I worked with Ruhul building Reference Box.'

How did you come across Oxford Entrepreneurs?
'I really enjoyed the extra-curricular side of Oxford. I was first involved with the Oxford University Persian Society and later with Oxford Development Abroad: I volunteered with them and went out to Morocco in the summer of my first year. I became President and through that learnt a lot about working with committee members and the skills you need to manage a team, which later turned out to be pretty valuable.

'At the same time, I was very interested in entrepreneurship. All three of us did internships in the city: I was at Merrill–Lynch, Eamon was at Credit Suisse and Ruhul got a job at Mitsubishi UFJ. We all felt we weren’t challenged,  weren’t given the freedom to grow and develop our skillsets. So, just through those internship experiences, we thought: "Perhaps there is another alternative." At about this time I was accepted to be the President of Oxford Entrepreneurs, a sabbatical position. That year was quite involved: we realised £52,000 in sponsorship!'

How did your experience at Oxford Entrepreneurs help you start your own company?
'The three of us thought the current method of background checks was an unnecessarily manual and cumbersome process. When we spoke to HR departments in the banks, their pain points were the same: turnaround times, transparency on pricing, applicant experience. We felt there was a challenge from the applicant's and from the companies' perspective there was a challenge. So we were beginning to develop a business case.

'At the same time we were running high-profile events: we ran 52 events that year, including a hackathon where the winner could visit David Cameron in 10 Downing Street, and lots of speaker events with speakers from the House of Lords.

Increasingly, we started to feel that we shouldn’t be branding Oxford Entrepreneurs as a student society but as a company.

'Increasingly, we started to feel that we shouldn’t be branding Oxford Entrepreneurs as a student society but as a company. So we treated it as a company and got taken a lot more seriously. Towards the end, I suggested to Eamon and Ruhul that I was thinking of incorporating this company and I applied for the Isis Innovation Software Incubator, which we got in August 2012.

'We then spent the first few months developing our prototype and took that to our first flagship customers, some of whom were Oxford Entrepreneurs sponsors. The take up was good, particularly for the growing "on-demand and sharing economy" – that’s where you share an asset, like companies such as Bla Bla Car: 'connecting people who need to travel with drivers who have empty seats' or Airbnb, where you’re sharing a room you have when you’re not using it. So when we were starting out in 2012 the on-demand economy was just taking off, and our tech-driven solution to background checks was perfect for those types of businesses. We could offer them a service which minimises human error and was much faster than the traditional, manual alternative.

'We managed to get a few big contracts and continued to grow. But the connection with Oxford Entrepreneurs was always there: whenever we wanted to be introduced to someone, you’re not taken very seriously as a 25 year old (it doesn’t help that we only look 18!), but through the society we had contacts and mentors that opened up many doors for us that we wouldn’t otherwise have had. It helped in terms of investors, in terms of being put in front of some flagship companies. We got an investment from Brent Hoberman, one of the co-founders of  lastminute.com, as we’d ask one of the co-founders to speak at Oxford Entrepreneurs, and so we were able to build that relationship much more quickly; it was a similar story with OneFineStay.com – another top-10 on-demand economy start-up – and Bla Bla Car.'

How does it work? How can you pull that information automatically?
'Everything is consent based. The employers, platforms or marketplace provide us with the applicant’s name and email address and they select the type and level of check that they want to carry out. This can include identity checks, document checks, education, employment, criminal and so on. We then email the applicants with a link to an online form for them to provide their information – their name, address and date of birth – and they also have to give us their consent. We have integrated with all the data suppliers – the Credit Agency, the Criminal Records Bureau and all the others – so that, once the applicant has given us their information and their consent, we automatically pull that information in and can present it all to the employer. Because it’s automated you're able to get some of the results instantly, and others in a matter of days, as opposed to having to wait for many weeks.'

Where do you see Onfido going?
'At Onfido, we’re increasingly finding that the world is changing and the labour market is changing. So, whereas previously people tended to do one job and know each other, in the new world people tend to do do many jobs and be strangers to their prospective colleagues. This is particularly true of the on-demand sector where you have a nanny come in, or a tutor or cleaner. You wouldn’t normally allow these perfect strangers to interact with you – but why not? If they are the best placed to provide you a service you need, the only missing link between a stranger and someone you can trust is the background check. So our aim is to make background checks accessible, to become an engine for trust that helps power the global economy. Whomever you need to interact with and in whatever capacity, these checks are a quick and easy way to have confidence that you can trust the other person.'

What gives you most job satisfaction?
'Having a team that has a joint sense that this is a mission, that we’re in it together. I’m privileged to have such talented people wanting to work with us, wanting to be on our team. The big contracts are all good, but for me the best thing is working with a really smart team.' 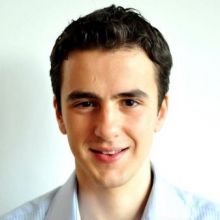 Husayn Kassai is CEO and Co-Founder of Onfido Background Checks. He was the President of Oxford Entrepreneurs while studying Economics and Management at the Saïd Business School.