To really understand Lovelace’s paper you need to put it in the context of contemporary ideas of literature and science... Where did these ideas of abstract computing come from? What bigger cultural forces were in play?

What are you intending to talk about at the Ada Lovelace Symposium?
I’m talking about Ada Lovelace’s mathematical papers – as a mathematician I am fascinated by these archives in the Bodleian, which in the past have attracted less attention than they might from scholars because of their very technical nature. I’m working with the first historians of mathematics to study this material, Chris Hollings and Adrian Rice, and we are analysing an extraordinary 'correspondence course' that Lovelace took with Augustus De Morgan – the Bodleian has both sides of the correspondence. De Morgan was a leading mathematician of the day, a professor at Cambridge and later UCL, and Lovelace was working through material he was teaching to his advanced students at UCL. De Morgan rated Lovelace highly. He organised his own teaching at UCL around fundamental principles and praised her as someone whose power of thinking was 'utterly out of the common way', capable of grasping the 'real difficulties of first principles'.

We agree – some scholars have questioned Lovelace’s abilities, but this was challenging material, studied by very few people, and Lovelace was not afraid to ask hard questions and was tenacious at dealing with the difficulties, and made a number of insightful observations.

In later life Lovelace continued to pursue her mathematical interests. She contributed to her husband’s writings on crops and husbandry, and she became interested in mesmerism and reflected on whether there might be mathematical laws underlying the operations of the brain, a 'calculus of the nervous system'.

Do you think that the differences in how we’re able to communicate now as opposed to then has implications in maths communication and idea development?
In the mid-1840s, when Lovelace wrote her famous paper, people were starting to become aware of the power of abstract thinking in mathematics, and the way algebra and calculus could be used to model and understand the natural and man-made world.  But until the advent of computers in the 20th-century, applying these ideas required impossible amounts of hand calculation – imagine modern weather forecasting without computers. The development of 21st-century communications technologies means we can speed things up like never before, and new AI techniques and the methods of 'big data' allow us to go even further with real-time analysis and prediction

It’s controversial how much work is Lovelace’s and how much Babbage’s – what’s your perspective on that?
It was a collaboration – based on many conversations and letters between them, Lovelace was explaining Babbage’s machine much more clearly than he was ever able to do himself. Amazingly, just like Lovelace’s mathematics, the archive of correspondence between Lovelace and Babbage has still not been studied properly by people who fully understand the technical details. Lovelace’s famous paper also contains broader reflections on the power and limits of computation, and the creative possibilities of the machine. The biographer Richard Holmes, who is speaking at the symposium, makes the point that to really understand Lovelace’s paper you need to put it in the context of contemporary ideas of literature and science. Rather than trying to untangle whether a particular idea came from Babbage or Lovelace, it’s much more interesting to think ‘Where did these ideas of abstract computing come from?’ What bigger cultural forces were in play?

The other contested question is 'Was Lovelace the first programmer?' Lovelace’s paper contains a table illustrating the workings of the machine through the computation of the 7th Bernoulli number. This is often described as 'the first computer program'. However, Lovelace wrote, more accurately, that it 'presents a complete simultaneous view of all the successive changes' in the components of the machine, as the calculation progresses. The 'program', had the idea existed at the time, would have been the instructions that caused the machine to make those successive changes.

How prevalent were groups of mathematicians in Ada’s time? Were they mainly Old Boys’ Clubs?
Our research shows that Lovelace had great potential as a mathematician, but after her studies with De Morgan, and the famous paper she wrote with Babbage, her energies went into other things and she did not go on to pursue it. It would have been difficult to do so. Apart from a very small number of posts at universities, those engaged in mathematics were generally 'gentleman amateurs', or working as actuaries, lawyers or clergymen. They would typically have many scientific interests, and would meet regularly at places like the Royal Society (closed of course to women) to discuss their ideas. Mathematics training in universities was intended to develop skills in clear thinking rather than train professional mathematicians. Unlike continental Europe, there was not a developed culture of mathematical research. The utilitarian role of mathematics was paramount. A typical mathematics paper would most likely be based on calculation and examples, without proofs in the sense understood today. To be a 'mathematician' meant to think rationally about the world in a principled way, and to grasp the power of calculating from general principles and getting to grips with numerical data.

Why do you think Ada was so successful?
She had great drive and passion for the problems she was working on. One of the things we’ve uncovered is the only known photographs of her. She looks very different to the well-known paintings, and you can see the intensity and fierceness in her face. As De Morgan pointed out, she worked at establishing the fundamental principles of things – Babbage got bogged down in the technical details, but Lovelace seemed to be thinking much more widely about what the engine would be able to do. 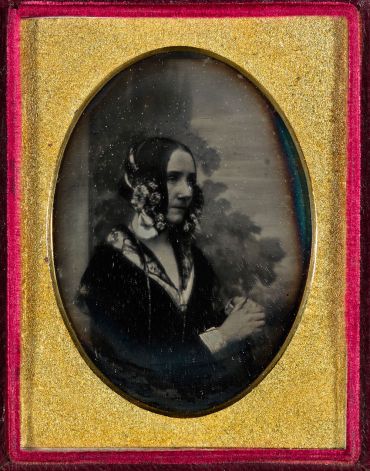 Daguerreotype of Ada Lovelace, about 1843, reproduced by courtesy of G M Bond

What is your general research on?
I started off as a mathematician, and then moved into computer science and getting computers to do mathematics. That led to work developing mathematical techniques to eliminate software bugs, working in particular in safety-critical systems such as the aerospace sector. The idea involved abstract principles: rather than run lots of simulations of a plane’s behaviour you model it in algebra, and use specialist software to analyse the algebra to check that the behaviour of the plane is what  you want.

How did you get to where you are now?
I enjoyed my research career in the US and the UK, but I also enjoyed making things happen, and the bigger picture of academic life. In 2005 I took up a senior management role, as Vice-Principal for the Science and Engineering Faculty at Queen Mary University of London. I was particularly proud of developing our relationships with industry, especially the hi-tech companies around Silicon Roundabout, and our outreach to local schools.

Of all your many jobs over the years, what had given you most job satisfaction?
It’s such a privilege at the end of my career to be here in Oxford, with the freedom to do whatever research I choose and amazing people to talk to across a range of disciplines. I get a great deal of satisfaction these days from working with younger scholars, and helping them get the most out of academic life.

Can you remember what first hooked you about maths or computer science and convinced you that that was where you wanted to spend most of your research career?
My father grew up in Cuddesdon, a few miles east of Oxford, where his father was the village schoolmaster. There were eight children, mostly pretty smart, and they all left school in their early teens – it was a different world then. But my father was very keen on mathematics, studied advanced material on his own, and introduced me to mathematics through puzzles and number games. And that brings me right back to Ada Lovelace and Charles Babbage, and a wonderful page of their mathematical scribbles that contains something called a magic square – if you add up the numbers at the top (2+9+4) it's 15, the next row adds up to 15, all the columns and diagonals add up to 15. And I remember my dad showing me how magic squares worked, and how to use algebra to make lots of different ones. He would have loved that page of mathematical scribbles, and it would have been such a joy to show it to him.

Ursula Martin is Professor of Computer Science at the University of Oxford.

We have a large programme of events on in Oxford to celebrate Ada’s 200th birthday. More info here.