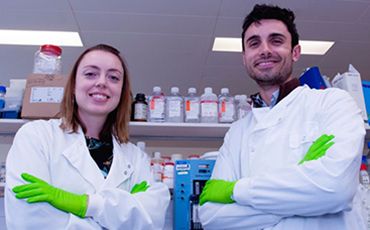 Dr Amity Roberts and Dr Matteo Vecellio in the laboratory at the Botnar Research Centre.
The non-coding regions of our DNA may play a crucial role in how our genes are expressed in inflammatory diseases, such as ankylosing spondylitis (AS). Yet, very little is known about these genetic associations.

NDORMS researchers Dr Amity Roberts and Dr Matteo Vecellio are working to change our knowledge of the genetic landscape in AS with an eye on its potential for generating new ideas about treating this condition.

AS is found to be associated with more than 60 genes; getting to grips with the mechanisms behind these genetic associations is no easy task and the pair has already received a European League Against Rheumatism (EULAR) Abstract Award 2016 in Basic Science in recognition of their work, presented at this year's EULAR Congress in London.

"In Professor Paul Wordsworth's Genetics of AS laboratory, we are trying to assess the impact of disrupted transcriptional regulation in AS patients, to gain new insight into how this disease develops. The experimental approach we use will allow us to identify potential targets for drug discovery by improving the characterisation of the cell types involved in AS and the relevant molecular pathways." say the researchers. They add: "We would like to thank EULAR for this award. This achievement at the European level encourages us to work even harder to pursue our research goals and contribute to improving the lives of people with AS."

AS is a painful and progressive form of inflammatory arthritis, which affects around 200,000 people in the UK. It has a strong genetic basis and is more common in men in their late teens or 20s. The condition causes inflammation in the spine and other joints, leading to pain, stiffness, and fatigue.

Treatment of AS has greatly improved in the past decade and there are available therapies to manage pain and ease stiffness. Patients are also encouraged to explore exercise routines and pay close attention to posture. However, a significant portion of AS patients still suffers persistent disease or unacceptable side effects from current therapies, so a definitive treatment is still lacking.

Amity and Matteo are researching particular single nucleotide polymorphisms (SNPs) in AS, which could lead to novel therapies for the condition.

SNPs are the most common type of genetic variation amongst individuals and are often found in the non-coding regions of our DNA. Whilst their functional effects are still unclear, it appears SNPs affect how AS presents itself in patients, potentially holding the key to new effective therapies.

Disease-associated SNPs have been identified at enhancers - sequences that control gene expression and ultimately, how cells behave - but little is known about the networks of genetic disruption involved in AS or how such information might be used to better define the relevant pathogenic pathways in AS.

"We have shown a functional effect of a SNP associated with AS, where the variant disrupts enhancer activity and is associated with increased percentage of inflammatory immune cells called CD4+ T cells that produce interferon gamma. We are now working on elucidating the complete mechanisms of action of this variant" says Amity. She adds: "These results are very promising and have the potential to lead to a new target for therapy."

On the RUNX3 gene, Matteo has found several SNPs to be associated with AS. "We have recently published a paper highlighting the possible functional role of one of these SNPs in AS, and its effect in regulating a population of immune cells called CD8+ T-cells. We are now applying several high-throughput techniques to elucidate the relevant molecular pathways these SNPs can affect, and to characterise the cell types involved."

Following their EULAR Abstract Awards, the two researchers have presented their findings at this year's EULAR Congress, the primary platform for exchange of scientific and clinical information on rheumatology in Europe.