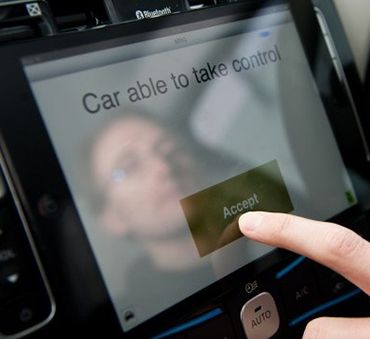 OxBotica, which is at the forefront of robotics and autonomous systems.

The funding came from three seed funds, and boosted fifteen new companies. These include:

“We have again seen huge interest from investors in the University of Oxford Isis Fund II, both because of the high quality pipeline of spin-outs from Oxford and of course the excellence of its research, reflected in the recent REF result,” said Parkwalk’s Moray Wright.

Andrea Alunni, Isis Innovation Seed Investment Manager said: “By all measures 2014 was an outstanding year in which we set up fifteen new companies: nine spinouts and six startups from our Isis Software Incubator.

“The biggest seed fund investments were in Oxbotica, which is working at the forefront of robotics and autonomous systems, and our very exciting flexible display technology from the Department of Materials, with applications in ‘smart’ glasses, synthetic retinas, and foldable screens.

“And although spin-outs are the most visible of the years’ successes, a large portion of this seed funding has gone to technologies which will be taken forward by our licensees, existing companies, many of them local and leaders in their fields.”

Isis Innovation Executive Director Linda Naylor said: “An enormous amount of hard graft, skill and creativity goes into each successful technology, and each fledgling company. Being able to provide finance to propel new companies towards their goals and towards further investment is a critical part of Isis Innovation’s mission for the University of Oxford.

“Successes such as the acquisition of Isis spin-out NaturalMotion by Zynga for $527m have refreshed our seed funds. It’s also been great to see the groundswell of enthusiasm for UK technology from the investor community, and the confidence that early investments will pay off in the long term.”

Isis currently manages two seed funds on behalf of the University, the University Challenge Seed Fund and the Oxford Invention Fund, which is open to corporate and philanthropic donors. Parkwalk manage The University of Oxford Isis Funds, EIS Funds offering alumni, friends and supporters of the University the opportunity to invest in Oxford spin-outs in a tax efficient manner.