Oxfordshire’s economy is set to benefit from the expected demand for low carbon goods and services over coming decades, says a new report. The research was carried out by the University of Oxford’s Environmental Change Institute with Low Carbon Oxford, a network of organisations working towards a low carbon economy. 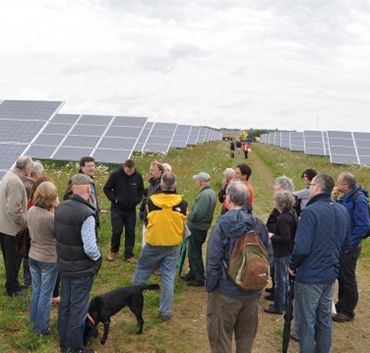 Oxfordshire is known for its innovation in building technologies such as solar power and wind energy technologies.

It suggests that the low carbon sectors in the county’s economy could grow by around £1.35 billion a year by 2030, creating around 11,000 new jobs, if a coordinated effort is made to bring in investment of up to £300 million per year.

The report says this might sound like a lot of money, but the county’s low carbon sectors already generate over £1 billion a year in sales (around 7% of Oxfordshire’s economy), and employ almost 9,000 people. Oxfordshire is best known for its innovation in building technologies, alternative fuels, alternative fuel vehicles, as well as solar power and wind energy technologies, says the report.

They identify the Local Enterprise Partnership (OxLEP) as a key player for developing a strategy for developing Oxfordshire’s economy. LEP’s Strategic Economic Plan has already described Oxfordshire as an outstanding knowledge-based economy, because of its world-class universities, innovative technology companies and research and development centres.

Report co-author Dr Gavin Killip, from Oxford University’s Environmental Change Institute, said: ‘Oxfordshire is a market leader in low carbon goods and services so a global drive towards decarbonisation means that the county’s economy could be in line for a substantial boost. As well as highlighting the economic benefits, our report identifies some of the potential problems, such as housing and traffic congestion, offering different scenarios for our future. With investment, innovation and vision will come much greater benefits. We hope this report stimulates the debate about how we make this county a decent place to live and work in by 2030.’

Dr Barbara Hammond, Director of Low Carbon Oxford and Chief Executive of the Low Carbon Hub, said: ‘For the first time Oxfordshire has an evidence-based vision of a low carbon future. The report shows how the return on low carbon investment is positive for the county, as well as providing a blueprint of how we can create a future with economic growth, extra jobs, smart infrastructure, energy resilience and a sustainable quality of life. Partnerships and a commitment to learning are key to success, and we are already taking positive steps in the right direction.’

Traffic congestion on the roads and railways is highlighted as ‘the biggest and most politically charged challenge for Oxfordshire’. Substantial growth in housing and commercial development is planned in Oxford city and the rest of the county, which the report says will only increase these pressures, particularly at peak times. The researchers estimate that Oxfordshire currently spends over £1bn per year on fossil fuels and suggests how this could be significantly reduced. It says Oxfordshire’s new transport links, built to be smart and low carbon, could support the innovative low carbon sectors and also act as local ‘living laboratories’ to test the market in low carbon ideas.

Co-author Dr Nick Eyre, from the Environmental Change Institute, added: ‘I think this report shows that key players in the county will need to work together to make this happen. There will need to be innovators and investors willing to put money into research and development, and into building the infrastructure.’

Co-author Dr Christian Brand, a Senior Research Fellow in Transport, Energy and the Environment, said: ‘Transport currently accounts for 37% of total carbon emissions in the county as compared with the UK average of 29%. We need a proper debate about how different partners in the county come together to invest in cleaner vehicles and promote public transport, cycling and walking.’

The report was launched at the University’s Said Business School on Monday 8 December. The event was attended by business leaders, council representatives and researchers from both Oxford universities.