Begbroke Science Park (BSP) has developed its own Minibus Tracker App, to help staff and visitors get real time updates on the locations of its minibuses. 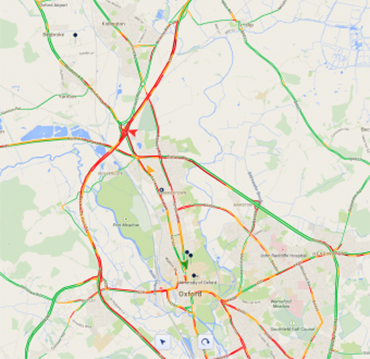 In addition to allowing users to view the scheduled minibus timetable, the App will help them gauge how traffic will affect their journey between the Science Park, the University Science Area and Oxford city centre.

The Science Park is one of several University departments who run shuttle bus services, allowing staff to travel between sites around the city centre, and the three blue and white buses are well-known to regular users of the Woodstock and Banbury roads heading out through North Oxford.

The Begbroke Science Park buses are a vital link for researchers who regularly work in two locations – in the research laboratories at Begbroke Science Park, and in the University Science area. Staff and visitors travelling to us via trains or buses into Oxford city centre can download the App , so they can work out exactly which minibus they can pick up to take them the last step of their way to the Science Park. The new App will allow the science park to provide more accurate information about its minibus service.

IT Manager Ben Roeves, who commissioned the app, says “Once downloaded from either the Google or Android app stores there is no configuration needed – you just download it and open it up. It links with Google Maps to show you where the stops are and where the bus is and can also show your current location via GPS. The bus will either be red (stationary), orange (slow moving) or green (moving at normal speed). There is a link to the timetable in the top right of the app so you can see when the next bus is due at the desired stop”

The App is now live on both the Apple App store for iOS and Google Play store for Android and is also available on the Begbroke Science Park website.

Dr Caroline Livingstone, BSP’s Manager added ” As we head into the winter months, we know this improvement in our service will avoiding having staff waiting in the dark, or in cold or wet weather, by providing them with better information – given the volatile state of the traffic flowing in and around Oxford, we know it will be especially useful as traffic volumes increase over the Christmas shopping period.”