A project which has harnessed technology to improve care for women who develop diabetes during pregnancy has won a national prize. The team behind GDm-Health – the gestational diabetes smartphone app – received the Best Digital Initiative trophy at the Quality in Care Diabetes Awards. 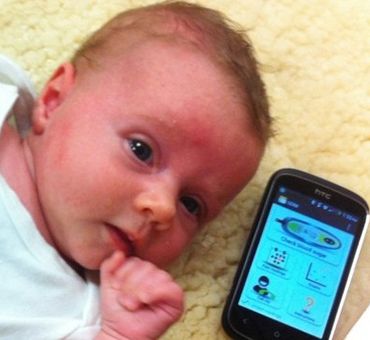 The technology was developed – with patient input – by Professor Lionel Tarassenko, Professor of Electrical Engineering and Head of Engineering Science at the University of Oxford and his research group.

The project is a collaboration between Oxford University Hospitals and the University of Oxford, funded by the Oxford Biomedical Research Centre. Professor Tarassenko said: “Our digital health work (smartphone apps for managing your health) has now been shown to be clinically useful. This outcome has only been possible because of the partnership between engineers and clinicians that exists in Oxford”.

Every year hundreds of women due to give birth at the John Radcliffe develop gestational diabetes – it affects about one in ten pregnancies, but that figure is rising.

Benefits of the smartphone app

The conventional treatment is for the patient to manage and record their blood glucose levels up to six times a day with their medication dose adjusted on fortnightly check-ups in hospital. The smartphone app enables diabetes specialists to keep closer tabs on their patients – while reducing the number of tiring, time-consuming and expensive hospital appointments.

Dr Lucy Mackillop, Consultant Obstetric Physician based at the John Radcliffe Women’s Centre, said: “This is a fantastic accolade and an excellent example of innovative and successful collaboration between the university and hospital. It is also a fabulous boost for our wonderful team and all their hard work”.

Katy Bartlett, Lead Diabetic Midwife, said: “The success of this project has exceeded our expectations which is fantastic”.

Vanessa Galli-Wara, of Calvert, near Buckingham, was diagnosed with gestational diabetes towards the end of her first pregnancy. She used the new device to monitor her blood sugar levels and pass on comments to the team at the JR. Vanessa made adjustments to her diet based on regular feedback from diabetes specialist midwife Katy Bartlett. Vanessa’s daughter Harriet Poppy was born fit and well on 11 November.

Vanessa said: “It was handy to know that I was in constant touch with somebody and that I would get a message if there was something to worry about. Katy was very kind and helpful.

“Without the kit I wouldn’t have known my results and what my diet was doing to my levels. I would have had to follow a more rigid diet. We live about an hour away so having fewer appointments as a result of using this kit helped a lot”.

Following the success of the pilot project in Oxford, the initiative is now being introduced at other hospitals, thanks to the Oxford Academic Health Science Network. A full randomised trial is also under way. Two hundred women are taking part in this and results should be published next year.

This news article first appeared on the Department of Engineering website.