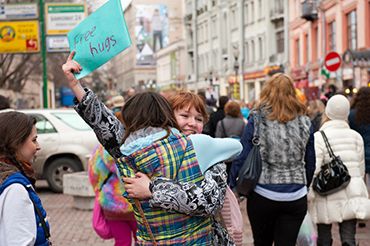 “Hugging it out” is often touted as a good way to solve a problem.

“Hugging it out” is often touted as a good way to solve a problem. Now a group of Europeans have decided that that’s all Britons need to convince them to stay in the EU. Their #hugabrit campaign, in which people send in pictures of themselves hugging a Briton, aims to launch “a lovebomb” across the Channel.

Of course, hugs can help in many situations, from showing appreciation to beating loneliness and stress at work. Need a friendly cuddle to calm you down, but no one to cuddle with? The Japanese may have the answer … visit a soineya. Literally a “co-sleeping speciality shop” – or cuddle café to you and me – these establishments offer, for a fee, anything from 20-minute embrace to a whole night with a quiet cuddle or even sleeping (and I mean sleeping) with a stranger. Perhaps the prospect of cuddling a stranger fills you with abject horror? But ask yourself first why it is that we like to cuddle.

Touch is, in fact, very important in our relationships. My collaborators at Aalto University in Finland and I recently sampled people throughout Europe, and found much the same broad pattern everywhere: the closer the relationship we have with someone, the more of our body they are allowed to touch. I don’t know about the Japanese, but Europeans (and, no surprises, the Brits in particular) are a bit standoffish about where a stranger was allowed to touch them. A polite handshake is fine, shoulders and arms just about OK, but anywhere else is pretty much verboten.

To understand what’s going on when we cuddle, we need to step back to our primate past. Monkeys and apes create and maintain their friendships through social grooming. Useful as grooming may be for removing debris from skin and fur, its real effectiveness arises from the slow leafing through the fur that is involved as the groomer searches for foreign matter. We still do it, up to a point, for example when parents leaf through their children’s hair. And of course this is why we find the attentions of our hairdresser so relaxing.

The slow stroking involved in grooming stimulates a particular set of nerves – the afferent c-tactile neurons that are found only in hairy skin and are quite different to the usual nerves that convey information about touch, pain and pressure. These neurons respond only to light and slow stroking. They have a direct route into the brain, where they trigger the release of endorphins.

Endorphins are neuropeptides, small molecules that are used by neurons in the brain to signal to each other. Endorphins are part of the pain control system, and produce an opiate-like analgesic effect. In fact, they are chemically closely related to opiate drugs like morphine, but differ in two key respects: on a weight for weight basis, they are 30 times more effective as painkillers than morphine, and we don’t get so destructively addicted to them.

We used a form of brain imaging known as positron emission tomography (PET for short) to show that light stroking of the torso triggers a massive endorphin response in the human brain, just as grooming does in monkeys and apes. Cuddling, with its concomitant behaviours of stroking, patting and even the occasional leafing through the hair, is the human form of primate grooming, and is designed to create and maintain our relationships.

Endorphins also activate regions of the brain associated with reward, such as the orbitofrontal cortex – just above the eyes – and it is this that makes us want to repeat the experience.

It is because morphine overdoses on these same effects that addicts lose interest in their social world: in effect, they are getting their hugs artificially and don’t need human contact to provide the hit. These opiate-like effects of endorphins are reinforced by oxytocin, another neuropeptide that also tends to be stimulated by hugs and has light analgesic properties. Oxytocin’s main function is associated with lactation (its main job is to manage the body’s water balance), and because of this evolution has adapted it in mammalsnto create the feelings of warmth and attachment associated with suckling, and so any kind of physical contact.

Hug a hoodie or #hugabrit then? Well, maybe not, because the extent to which the experience of hugging gives us pleasure and helps bond relationships has a deep psychological component. Somewhere in the brain’s frontal lobes is a mechanism that can switch touch from being pleasurable to being unpleasant if the wrong person does it. Which, of course, is why we hate being crammed together in elevators. All that human flesh in close contact – ugh!