Professor Paul Collier writes an opinion piece about migrants, saying that more help should be given to "those in ‘haven’ countries". 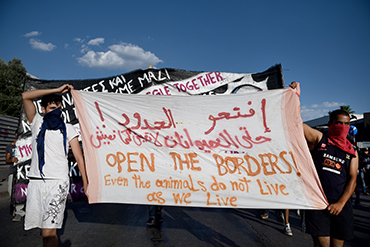 The EU is trying to deter migrants from coming to Europe but those already here are still trying to push north. The Balkan route from Greece to Germany is closing and yesterday Macedonian police used teargas and plastic bullets to drive back thousands of people massing on its borders in Greece. It may be that efforts to return some migrants from Greece to Turkey will put others off making the crossing to Europe in the first place. The trouble is, the new strategy has real vulnerabilities.

Gaining the agreement of Turkey to accept the migrants meant conceding to President Erdogan of Turkey not only a substantial €6 billion but promises of visa-free entry for Turkish citizens and a reinvigorated process of Turkish admission to the EU. These promises are highly unlikely to be kept since keeping them would involve breaching basic principles of democracy.

President Erdogan announced on the day of the agreement that words such as “democracy” and “human rights” are meaningless in the Turkish context. Quite what will happen if he thinks the EU is not delivering is an open question.

In addition, whether the capacity can be mustered on the Greek islands physically to return thousands of migrants against their will is doubtful. The Greek government has little interest in implementation and it lacks the practical capacities. The European Commission is attempting to organise secondments from other governments, but to date this has not materialised on anything like the required scale. This will be compounded by intense media attention on any breaches of human rights: foot-dragging would be one way of avoiding bad publicity.

On top of this, because of the mounting opposition of ordinary German citizens to open-ended migration, the Merkel plan to accept the same number of refugees into Europe as the number of migrants returned from Greece to Turkey has been capped at around 73,000. It will be in the interest of the people-traffickers to bust through this ceiling by bringing more migrants into Greece.

The people-trafficking business is not a small-scale amateur operation: Latin American trafficking syndicates have moved into this new market. To induce people to continue to try their luck on the boats they have an evident interest in exaggerating the continued chance of permanent settlement. European officials will be trying to counter this but they also have an evident interest in saying that the door has been firmly closed. Potential migrants are not fools: they are likely to recognise that both of these messages are self-serving. It is unclear which migrants will believe, but the people-trafficking message offers hope and so is more appealing.

Finally, and most alarmingly, the entire people-trafficking industry could simply relocate to the coast of North Africa and ship migrants to Italy instead of Greece. The agreement with Turkey would not apply and no equivalent repatriation agreement could be negotiated because, whereas Turkey can be deemed a safe haven, countries such as Libya cannot.

If the end result is a shift of the industry to North Africa the long-term consequences could be massive, since the entire Sahel region, and beyond it huge societies such as Nigeria and the Democratic Republic of the Congo, become potential feeds.

What would a more viable alternative to our present policy look like? I think it would be based on a profound rethinking of how our duty of rescue to the desperate can best be met.

In awful situations such as the exodus from Syria the duty of rescue is primarily to ensure there are neighbouring safe havens to take all those displaced. This requires generous and sustained finance for haven countries. The EU should have provided such support for the countries bordering on Syria. Shamefully, it left Jordan, Turkey and Lebanon to bear the financial burden.

But the duty of rescue is not just about safety, shelter and food. Most of the refugees in the haven countries have avoided the camps where shelter and food are free, preferring the grim opportunities of working illegally in the cities; a small minority have risked their lives on the boats. What this demonstrates is that the human condition craves autonomy: refugees in the camps are housed and fed but are stripped of the dignity that comes from earning a living. Hence part of the duty of rescue is to provide viable employment opportunities to refugees in situ in the havens.

As a result of globalisation this is entirely feasible. For example, German firms have spent two decades creating many thousands of manufacturing jobs in Poland and Turkey: they could do this for refugees in all the haven countries. During the past decade a remote Turkish town has become the world’s main production centre for synthetic carpets. Jobs can be brought to refugees as long as global firms receive incentives to do so, and trade regulations are adjusted to ensure easy market access for what refugees produce. The Jordanian and British governments are jointly trying to bring this kind of dignity to refugees; meanwhile, Chancellor Merkel is offering President Erdogan whatever it takes to ship them back to Turkey.

Human rights law is a grey accumulation of rules that is procedurally so cumbersome as to leave substantial opportunities for extra-legal migrants to game the system. As has become evident, if would-be migrants are de facto able to improve their changes of remaining in Europe by extra-legal arrival on European territory, immigration will escalate as people-trafficking businesses expand their highly profitable niche.

The current actions towards refugees have been driven not by compassionate recognition of our duty of rescue, but by fear and hatred. The predominant narrative that refugees hear from Europe should be the offer of credible hope that life will improve. That hope should never have been to reach Germany — refugees are not migrants. Hope should mean jobs in the havens bordering on Syria, followed by a return to Syria once peace negotiations restore order. That is what refugees overwhelmingly want.

Sir Paul Collier is professor of economics and public policy at Oxford University and author of Exodus, published by Allen Lane, £9.98