On cold, dark days it is tempting to imagine shutting yourself away until the warmer weather returns. Many animals do just that by entering a state known as torpor, which reduces their bodily functions to a minimum and uses fat stores in their body for energy. Could humans ever hibernate in the same way?

Aside from providing a convenient way to avoid winter, one reason to find out might be the advent of long-distance space travel. A journey to our nearest planet Mars would take around eight months using current technology. If we one day hope to visit another star system, even if we could travel at the speed of light, the journey would take years. Being able to go into a state of long-term torpor would make such distances considerably less tedious for the astronauts and conserve vital resources.

As a neuroscientist, I am currently part of a team of experts organised by the European Space Agency to work out whether and how we might be able to put humans into a state of stasis. It’s still an open question but, at least in theory, we can’t exclude that it might be possible. 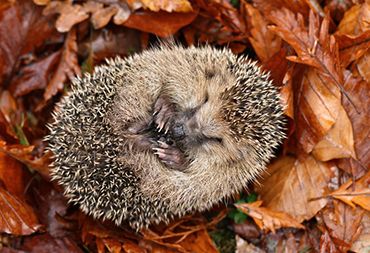 Hedgehogs go into prolonged periods of torpor, usually during the winter.

Torpor appears to have evolved to effectively fill the gaps during those periods of the year when there is no need for certain animals to be out in the world, for example when food is scarce. Technically it refers to a regulated state of reduced metabolism, meaning the chemical reactions in an organism’s body that keep it alive slow down. Heart rate, breathing and energy consumption all dramatically decrease and body temperature can also fall.

When and for how long animals enter torpor can vary hugely, from many months of the year, to just a few hours a day over a period of a few months. Some animals, such as mice and hummingbirds, enter a state of torpor on a daily basis if they need to save energy. Others, such as hedgehogs and bears, go into prolonged periods of torpor, usually during the winter (this is what we call hibernation). Those species that go into torpor every year, even if the conditions outside are stable, are called obligatory hibernators.

The fact that large mammals such as bears and even primates, such as the fat-tailed dwarf lemur of Madagascar, can hibernate means that theoretically humans aren’t too big or energy-hungry to enter torpor. Nor does our evolutionary origin prevent us from doing so, as hibernating animals have been found widely across all types of mammal.

Controlled hypothermia and metabolism are already widely used in clinical practice, such as during cardiac surgery and to protect tissues from damage when blood flow is reduced, such as after a stroke. Lowering body temperature and metabolism mean cells need less oxygen, enabling their survival in conditions when oxygen cannot be delivered. This process of artificial cooling in humans appears similar to spontaneous torpor in animals in that it includes reduced breathing, heart rate and metabolism. But the key difference is that animals seems to “know” the way to safely and spontaneously enter torpor. Lowering a human’s body temperature by blocking their natural thermoregulation requires the aggressive use of drugs.

One of the difficulties with replicating torpor is that we don’t really know how animals start and maintain the process. Much research has been devoted to investigating it but few conclusive answers have been obtained so far. On the one hand, it’s possible that torpor is triggered in a “bottom up” fashion, starting with changes occurring in individual cells of the body at a molecular level. But a “top down” approach that involves signals from the nervous system or hormones may also play a role.

There’s another key issue with the idea of human hibernation, and that’s what it might do to the brain. Animal hibernators regularly come out of torpor for a period of hours or days but often spend that time asleep, before returning to hibernation Similarly, animals emerging from daily torpor also usually enter a deep sleep.

This has led some scientists to suggest that, although we tend to think of hibernation as being like a long sleep, torpor actually creates a sleep-deprived state and the animals need to regularly compensate for this. We can see this in the way animals’ brainwave patterns are similar when they emerge from torpor to when they have been sleep deprived.

This maybe because the low metabolism and body temperature of torpor are associated with activity in those brain regions, which are typically associated with sleep regulation. But it may also be because torpor changes the brain in a way that could damage it if it wasn’t restored by the mechanisms of sleep. The brain is highly sensitive to a lack of oxygen and so needs to be protected during the time when blood and nutrients supply is reduced.

Another way that torpor affects the brain is by reducing and reorganising the synaptic connections that are the basis of our memories. Research in animals such as bats shows that most memories are preserved even after many months in a state of almost complete neuronal depression. But some memories seem to be taken better care of than others, such as the ability to remember close kin. So if we wanted to induce human hibernation it would be vitally important to investigate further how memories are retained over a long period of torpor.

While we’re still unsure whether safe prolonged human hibernation is possible, research looking at potential mechanisms may provide the novel insights needed for this to become a reality. Recent technological advances and new pharmacological and genetic tools have already shown great potential to induce or manipulate sleep. But to fully understand how we could safely induce human hibernation, we will likely need to dissect key brain circuits and identify the key molecular pathways that regulate our sleep functions.