Over 600,000 people die from malaria each year, most of them children in Africa
The KEMRI-Wellcome Trust Research Programme is a partnership between KEMRI, Oxford University and the Wellcome Trust. It conducts basic, epidemiological and clinical research from its headquarters in the rural district of Kilifi, Kenya Copyright © Alex Kamweru / Oxford University Images -- All rights reserved.

As we report the spread of drug-resistant malaria parasites on our news pages today – and the scale of the threat this poses to global efforts to control malaria – two other studies published today by Oxford University researchers report promising results in developing new drugs and vaccines against malaria.

While neither set of results will provide a solution in the short term, it does show there are a range of efforts in the pipeline that are showing potential against this most difficult of parasites to tackle.

It is Oxford researchers based in Thailand that have reported the spread of parasites resistant to our best anti-malarial drug, artemisinin. The same team has been involved in running a clinical trial of a new drug developed by the pharma company Novartis. The drug is currently called KAE609 and works against the malaria parasite in a new way.

'The growing menace of artemisinin resistance threatens our current antimalarial treatments, and therefore our attempts to control and eliminate falciparum malaria,' says principal investigator Nick White, who is a professor of tropical medicine at Oxford University and based in the Mahidol Oxford Tropical Medicine Research Unit (MORU) in Bangkok.

'This is why we are so enthusiastic about KAE609; it is the first new antimalarial drug candidate with a completely novel mechanism of action to reach Phase 2 clinical development in over 20 years,' he says. 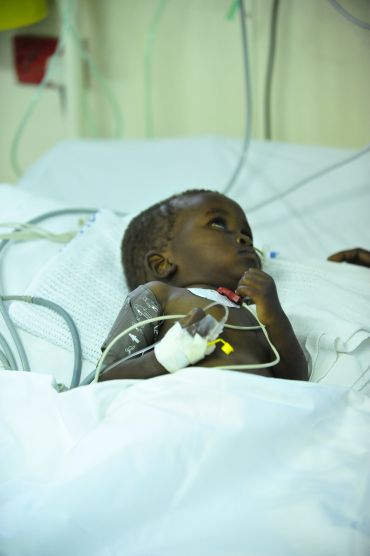 The results, published in the New England Journal of Medicine, showed rapid clearance of the parasites from patients' blood - a median time of 12 hours – including in patients with artemisinin-resistant infections. The main side effects observed were nausea and vomiting.

Novartis are now planning the next stage of clinical trials of the drug to continue to test the safety and effectiveness of KAE609. The study was supported by the Wellcome Trust, Singapore Economic Development Board, and Medicines for Malaria Venture.

Meanwhile, scientists in another of Oxford's overseas research programmes have identified a number of new malaria vaccine candidates.

The researchers in Kenya studied the immune responses of 286 children to a large number of proteins from the malaria parasite.

Writing in the journal Science Translation Medicine, the group was able to identify the antibody responses that most protected the children from malaria, and which of the many parasite proteins the children's antibodies latch on to.

Knowing which proteins to target could allow more effective malaria vaccines to be developed against the blood stage of the disease, they say.

'This study presents us with a large number of new vaccine candidates that offer real hope for the future,' says lead scientist Dr Faith Osier. She is based in Kilifi on the Kenyan coast - part of the joint research programme involving Oxford University, the Wellcome Trust and the Kenya Medical Research Institute.

The scientists followed a group of children infected with malaria over a six-month period. While some patients became sick, others were protected by naturally occurring antibodies. The antibodies stopped the malaria parasite from penetrating their red blood cells during the blood stage of the disease.

'Each year, hundreds of thousands of people die from malaria; but hundreds of millions are infected, many of whom are protected from severe symptoms by their immune response,' explains Professor Kevin Marsh of Oxford University and director of the KEMRI Wellcome Trust Research Programme in Kenya.

The researchers, collaborating with scientists at the Wellcome Trust Sanger Institute near Cambridge, used samples taken from these children to identify combinations of antibodies that provided up to 100 per cent protection against clinical episodes of malaria.

Crucial to this study, funded by the Wellcome Trust and the Medical Research Council, was a library of parasite proteins generated using a new approach developed at the Sanger Institute. Dr Gavin Wright and Dr Julian Rayner were able to produce large numbers of correctly folded, full-length proteins from the Plasmodium falciparum malaria parasite – in particular proteins involved in the invasion of human red blood cells. This allowed the immune response to the proteins to be studied in the lab much more easily.

Shootout at the OK Colon

Blasting back to the Big Bang