For hospital workers an outbreak of harmful bacteria in the wards is a nightmare, but what gives bacteria nightmares?

Perhaps the prospect of being eaten alive by a kind of viral parasite called a bacteriophage (bacteria eater): unlike antibiotics, which some bacteria have evolved a resistance to, bacteriophages are alive and so can fight back against bacterial counter-measures. But as yet the evolutionary 'arms race' between bacteria and their viral foes is poorly understood.

In a new study published this week in PNAS a team led by Oxford University scientists report a series of experiments examining this eternal war between bacteria and bacteriophages focusing on the bug Pseudomonas aeruginosa. I asked Alex Betts of Oxford University's Department of Zoology, first author of the study, about how we might recruit bacteriophages to fight for us…

OxSciBlog: Why did you focus on Pseudomonas aeruginosa?
Alex Betts: P. aeruginosa is very abundant in nature, it has been found in food, drinking water, soap, soil and even aviation fuel. It's also an opportunist and will infect humans if given a chance. In 2012 there was an outbreak of P. aeruginosa in a maternity ward in Belfast that tragically resulted in the death of three newborns. Some patients are particularly vulnerable such as those born with the genetic condition cystic fibrosis (CF) which affects over 10,000 people in the UK. CF patients can struggle to breath due to mucous in their lungs; P. aeruginosa easily infects their lungs where it can lead to a chronic infection and ultimately the death of the patient.

Whilst there are other bacteria that are more common causes of disease in hospitals such as E. coli and Staphylococcus, P. aeruginosa can be disproportionately problematic due to its high levels of antibiotic resistance. Many antibiotics are ineffective against it, which means if the patient's immune system cannot tackle the infection on its own then they can be in serious trouble, as is often the case with CF patients.

OSB: Why is understanding the relationship between bacteria and their viral parasites important?
AB: David Cameron recently said we face a 'medical dark ages' unless we tackle the problem of antibiotic resistance. No new antibiotics have been discovered for many years. But viruses can be used in a similar capacity to antibiotics, to kill bacteria infecting humans: this is referred to as phage therapy. In fact they were used to do so in the early 20th century but were abandoned in the west when penicillin was discovered. However, as resistance to antibiotics has increased the advantages of antibiotics relative to these virus parasites have reduced and they are once again in the limelight.

These viruses continued to be used in the Soviet Union and today in Georgia and Poland. They are currently the focus of a €5 million clinical trial (Phagoburn) for the treatment of infected burn wounds across multiple hospitals in Europe. These viruses have the potential to save lives if they are properly understood.

This type of scenario is referred to as a Red Queen scenario, which comes from Lewis Carroll’s Through the Looking Glass. The red queen says to Alice: 'It takes all the running you can do to keep in the same place'. Here the bacteria and the virus are both running to maintain the same relationship.

OSB: How could your research help to inform efforts to treat P. aeruginosa?
AB: Much of the in vitro work looking at the evolution of phage resistance has focused on single phage – single bacteria combinations. Largely looking at the relationship between Pseudomonas fluorescens (a comparatively harmless relative of P. aeruginosa) and a single viral parasite. However, in the practical application of bacteriophages to treat disease, it is likely that a combination of multiple different viruses, a bacteriophage cocktail, will be used. Here we expanded the existing view to include an important agent of human disease, P. aeruginosa, and a panel of six different viruses to get a broader view of the evolution of resistance in a clinically relevant microorganism.

Furthermore some of the same phages used in these experiments have been suggested for use in clinical trials to treat infections in humans. Our research highlighted that some phages are more susceptible to cross resistance than others, that means that in a cocktail, if resistance evolves to one of the phage, that resistance may also be effective against other phages making the cocktail less effective in the long run. These sorts of experiments could reduce the likelihood of cross resistance being a problem in bacteriophage cocktails.

OSB: What’s the next step for research in this area?
AB: Bacteria can be free-swimming, plankton-like organisms or they can attach to a surface and protect themselves in a jelly like layer called a biofilm. These biofilms are common in nature and contribute to bacterial resistance of antibiotics. These experiments were conducted under conditions where the majority of bacteria were free-swimming. Had the bacteria been predominantly in biofilms the nature of coevolution could have been quite different.

Additionally, phages could be used in combination with antibiotics to treat infections, it is possible that the presence of antibiotics could shift the balance of the arms races and lead to different outcomes, for example the complete eradication of the bacterial population. The nature of coevolution between biofilms and bacteriophages is not well studied and could be important for the use of phage therapy to treat infections in humans. 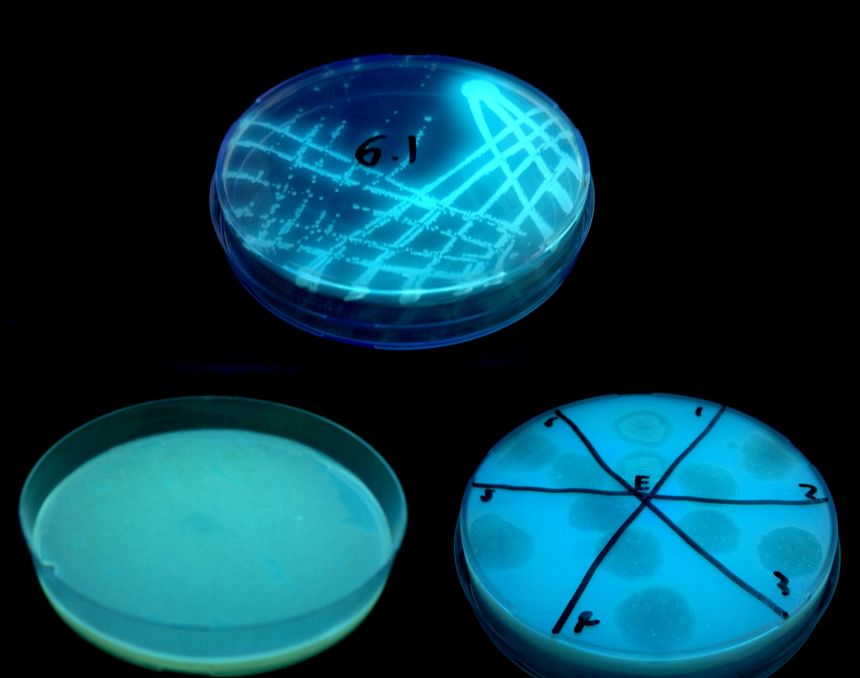 Pseudomonas aeruginosa grown as single colonies (top), grown as a bacterial lawn (bottom left) and holes punched in the lawn by bacteriophage (bottom right)
Photo: OU
A report of the research, entitled 'Contrasted coevolutionary dynamics between a bacterial pathogen and its bacteriophages', was published this week in PNAS.
Wildlife Photographer of the Year exhibition opens
Discussing the digital future of the humanities

Shootout at the OK Colon

Blasting back to the Big Bang