Close up of injection

The year is 1934, and in a laboratory hidden in the basement of the Oxford University Museum of Natural History, a young woman peers at the clear crystals handed to her by the Waynflete Professor of Chemistry at Oxford University. The crystals are made of the peptide hormone insulin, which has been familiar to endocrinologists since 1921. But its intricate structure is still a mystery.

Its importance, however, was known even before insulin was actually discovered – the name ‘insulin’ was first used by the British physiologist Sir Edward Sharpey-Schafer in 1916, for a hypothetical molecule produced by the pancreatic islets that controls glucose metabolism.

Insulin stopped being hypothetical in 1921, when the Canadian physiologists Frederick Banting and Charles Herbert Best, working in the laboratory of J.J.R. Macleod, isolated insulin from a dog’s pancreas.

On a cold January just a few months later, Leonard Thompson, a 14 year old boy with diabetes, became the first person ever to receive an injection of insulin. Despite a serious allergic reaction, the insulin treatment worked, with usually high levels of blood and urine sugars seen in diabetes dropping to normal – Leonard lived for another 13 years.

'Before the discovery of insulin, there really wasn’t much you could do for people who had diabetes’, said Katharine Owen, Associate Professor of Diabetes and diabetes consultant physician. 'It really was a terrible diagnosis.'

100 years after the discovery of insulin made diabetes a treatable illness, it continues to be an active subject of study for scientists, including at Oxford. Endocrine research at the University has long roots, and it was here, in 1934, that the Nobel prize-winning physiologist Dorothy Hodgkin took the first X-ray crystallography photos of an insulin crystal, in her basement laboratory at the Museum of Natural History.

But while insulin’s intricate structure and its utility in treating diabetes (known since 1922) continued to fascinate Professor Hodgkin, it wasn’t until 1969 that she and her team were able to decode the structure of insulin –when she first started studying insulin, X-ray crystallography and computing techniques were simply not advanced enough to untangle the complex structure of insulin. It took 35 years of collaborative work at Oxford and beyond before these techniques were up to the task of understanding insulin.

On the face of it, insulin is simple – it’s a short chain of amino acids, produced by beta cells of the pancreatic islets, and it spurs the liver, fat and skeletal muscle cells to absorb glucose from the blood stream. But decreased or absent insulin activity, as well as insensitivity to insulin results in diabetes, a disease that affects 422 million people across the world. 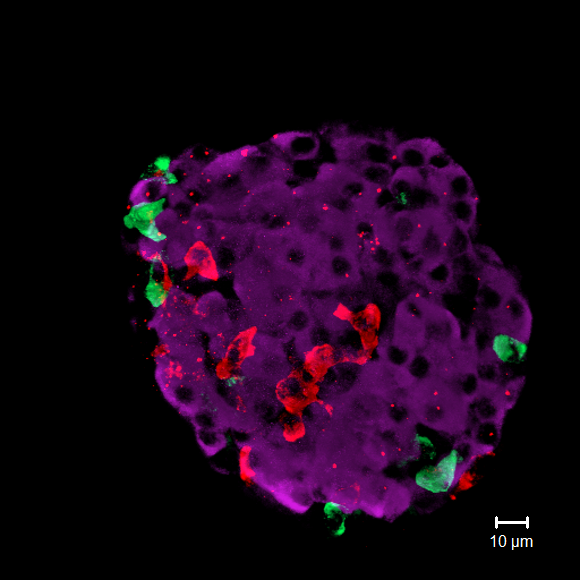 Understanding the structure of insulin not only made the mass production of insulin possible, allowing many more people to be treated – it also allowed other researchers to alter the structure of insulin, to create even better treatment options for patients. Insulin was the first protein to be chemically synthesised and produced by DNA recombinant technology, and it is on the World Health Organisation’s list of the medications needed in a basic health system.

But 100 years on, only about half of people requiring insulin actually have access to it. Within the UK, compared to white cohorts, children and young people with type 1 diabetes from minority ethnic communities are more likely to have higher indices of uncontrolled blood sugar, and were less likely to use insulin pumps or real-time, continuous blood sugar monitoring.

'These interventions have been really transformative in how we treat patients with diabetes', said Professor Owen. 'It is important that we try and get these treatments to all patients.'

'But now, there are short and long-acting varieties of insulin, and patients can titrate the amount and type of insulin they take to fit in with life, mimicking a natural physiological response much more closely.'

This change has been driven by greater understanding of how insulin works, as well as technological advances such as insulin pumps (a small, body-worn electronic device that delivers insulin) and continuous glucose monitors (which continuously monitor blood sugar levels, and can easily send this information to a device like a smartphone). Enterprising diabetes patient communities have taken these technologies a step further – the #WeAreNotWaiting diabetes DIY movement developed a community-developed, open source algorithm that allows insulin pumps to use the information from continuous glucose monitors to dispense the appropriate amount of insulin, a closed loop which comes close to mimicking how insulin control works normally.

Professor Owen hopes that researchers will continue to refine this closed loop technology, and over 50 years after the structure of insulin was decoded at its Natural History Museum, Oxford University continues to be a hotbed of insulin and diabetes research: the University works closely with Novo Nordisk, the healthcare company which first started producing insulin in 1922, months after it was first used in a patient. Professor Chas Bountra, the Oxford University Pro-Vice-Chancellor for Innovation, says: 'Our partnership with Novo Nordisk has enabled us to accelerate game changing research through sharing valuable resources and knowledge exchange. This ultimately leads to people with diabetes benefiting sooner from resulting medical innovations.'

The Novo Nordisk Research Centre Oxford aims to identify game-changing therapies for patients with type 2 diabetes and cardiometabolic diseases, and Professor Bill Haynes, VP and Site Head of the Novo Nordisk Research Centre Oxford explains its mission: 'These projects involve innovative in vitro and in silico approaches to gain a deeper understanding of the mechanisms involved. Using cutting edge methodologies and collaborating in this way gives us the best chance of finding novel therapies for patients with diabetes.'

Similarly, the Oxford Centre for Diabetes, Endocrinology and Metabolism (OCDEM) combines clinical care, research and education in its building at the Churchill Hospital, while the Diabetes Trial Unit specialised in performing local, national and multinational clinical trials to treat and manage diabetes.

A major theme of recent work has been to identify and treat worsening conditions even before they happen – work led by OCDEM’s Professor Rury Holman suggests that clinicians might be able to predict diabetes-associated heart failure in newly diagnosed type 2 diabetes patients with a simple blood test. Another major project from OCDEM’s Dr Rustam Rea aims to develop a tool to predict which people with diabetes are at risk of low blood sugar levels when they are admitted to hospital.

In contrast to type 2 diabetes, which is caused by the body becoming increasingly insensitive to insulin even though it is still being secreted, type 1 diabetes is caused by the insulin-producing beta cells being destroyed, because of an auto-immune reaction.

But here too, Oxford researchers hope to enable clinicians to act early – Professors John Andrew Todd and Linda Wicker are currently trialing therapy using a new drug to compensate for this autoimmune reaction. Professor Todd said ‘Our hope is the results will help to implement a therapy for children and young adults who have signs of autoimmunity but are not yet diagnosed with the disease and thus prevent progression of this serious disorder, which affects one in 400 children per year.’

In September this year, Professor Todd was awarded the 2021 EASD-Novo Nordisk Foundation Prize for Excellence, for his decades of effort to understand, prevent and combat type 1 diabetes, some of which may ultimately make insulin redundant as a treatment.

‘The really remarkable thing is that 100 after the discovery of insulin, the fundamental treatment for diabetes hasn’t changed – doctors gave diabetic patients insulin in 1922, and we still give essentially the same treatment in 2021,’ said Professor Owen. 'But this new line of work raises the possibility of immunotherapy for at least some types of diabetes, which means we’ll finally have treatments other than insulin to offer.'

'I’m really optimistic about the future of treatment for diabetes, especially type 1 diabetes,' she added. 'Instead of figuring out better ways of giving insulin, we’re finally at the point where can start testing treatments that stop the disease getting worse, or even reverse it.'

The centenary of the discovery of insulin may therefore finally mark the turning point where insulin treatment for some of the diabetes patients who currently rely on it, may no longer be required.