Setting the sensor on the Brunt Ice Shelf

Scientists from the University of Oxford are field-testing seismic sensors in the bitter conditions of Antarctica to simulate the solar system’s icy moons.

The Antarctic deployment is the first in what is hoped to be a series of extreme environment tests for the short-period (SP) sensor – a seismometer that records the high-frequency (high pitched) seismic waves generated by movement in the ice sheets.

Originally developed for the NASA Insight mission to Mars, the short-period seismic sensor built by Imperial College London is being tested to see how it might perform in the hostile conditions of the Solar System’s icy moons.

Dr Ben Fernando, Department of Physics at the University of Oxford (and co-lead on the project), said:

‘This is an incredibly exciting opportunity to test the seismometers in one of the most extreme environments on Earth, and a valuable opportunity to explore how they might perform on one of the icy moons of Saturn or Jupiter one day.’ 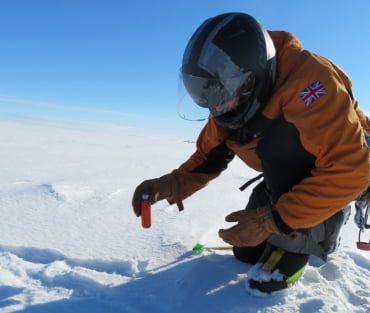 Setting the sensor on the Brunt Ice Shelf

The short-period seismic sensor is being calibrated using a network of tiny sensors installed into the ice shelf around the British Antarctic Survey (BAS) Halley VI Research Station.

The research team have already begun to collect data on seismic vibrations recorded below the Brunt Ice Shelf as part of the field test – providing valuable insights into the evolution of cracks in the shelf and the ocean conditions beneath.

Dr Tarje Nissen-Meyer, Associate Professor of Geophysics at the Department of Earth Sciences (and co-lead on the project), said:

‘Seismic instrumentation and data are extremely sensitive to a large range of ground motions and can therefore aid in monitoring ice dynamics, which is crucial for climate change, in such vast, remote places as Antarctica.’

If the short-period seismic sensor can withstand the harsh and icy polar conditions of the field test it could one day play a role in the search for evidence of primitive life on the icy moons of Saturn and Jupiter. The seismological recordings returned by a sensor on one of the moons would be expected to monitor any volcanic activity on the ocean floor beneath the icy surface, and to study the geological composition of the moon.

‘This project will help prepare for future missions to the moons of Saturn and Jupiter while using instruments first designed for Mars to monitor the formation of cracks in the Antarctic ice. It’s an excellent example of how space technology is providing benefits here on Earth.'

The project is a collaboration with the British Antarctic Survey (BAS) which is managing the deployed sensors, the UK Space Agency which funded the development of the short-period seismic sensor, and the seismic node manufacturer STRYDE.

The first Antarctic deployment is expected to last two to three weeks, ahead of a potential longer deployment next year.