A team of scientists, including those based at the University of Oxford as part of the Faraday Institution CATMAT project, researching next-generation cathode materials have made a significant breakthrough in understanding oxygen-redox processes involved in lithium-rich cathode materials.

The paper, published in Nature Energy, proposes strategies that offer potential routes to increase the energy density of lithium-ion batteries.

Prof Peter Bruce, at the Department of Materials, Oxford University, said: ‘In the ever more difficult quest to make incremental improvements to Li-ion battery energy density, being able to harness the potential of oxygen-redox cathodes and the bigger improvements they offer relative to the nickel rich cathodes in commercial use today is potentially significant.

‘The deeper understanding of the fundamental mechanisms of oxygen-redox is an important step in informing strategies to mitigate the current limitations of such materials, bringing their potential commercial use a step closer to reality.’

The deeper understanding of the fundamental mechanisms of oxygen-redox is an important step in informing strategies to mitigate the current limitations of such materials, bringing their potential commercial use a step closer to reality.

Increasing the range of electric vehicles demands battery materials that can store more charge at higher voltages in order to achieve a higher “energy density”. There are a limited number of ways to increase the energy density of the lithium-ion cathode materials. Most current cathode materials are layered transition metal oxides incorporating, e.g. cobalt, nickel and manganese. One research route is to store charge not just on the transition metal ions but also on the oxide ions.

Use of such oxygen-redox materials to increase cathode energy density has been promising for some years, but their use in commercial batteries has been hampered by the structural changes that accompany their use. 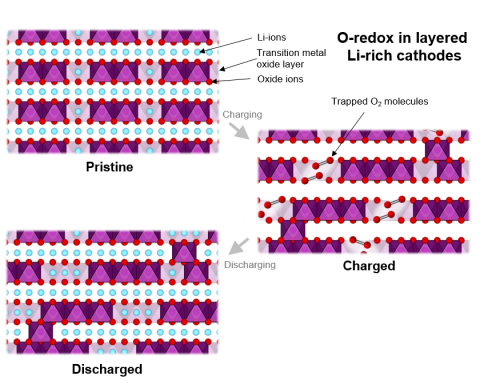 A significant research effort has been underway for some time around the world to uncover a mechanism for oxygen-redox that explains these structural changes that occur, but a clear understanding of the nature of oxidised oxygen remains a key part of the puzzle.

Image caption: The structure of a Li-rich cathode in a pristine, charged and discharged state showing how molecular O2 takes part in the energy storage mechanism of an O-redox material.

Techniques such as RIXS (resonant inelastic X-ray scattering) have been used with success in the past to probe the changes to the oxygen. But by collaborating with researchers at the state-of-the art, I21 beamline at Diamond Light Source, Faraday Institution researchers, including those from Oxford University, have successfully resolved these RIXS features that indicate that the oxidised oxygen species in the bulk of the material is molecular oxygen rather than peroxide or other species.

Today (30 March 2021), the Faraday Institution has announced a £22.6m commitment to build on its momentum in four key research challenges: extending battery life, battery modelling, recycling and reuse and solid-state batteries. This will help to extend the research by Prof Peter Bruce at Oxford and his colleagues across the UK.

The Faraday Institution’s vital research into energy storage is pivotal for meeting our net-zero commitments, particularly as we shift to low-emissions transport on our roads and in our skies

Launched just three years ago, the Faraday Institution has convened a research community of over 450 researchers across 21 universities and a set of 50 industry partners to work on game-changing energy storage technologies that will transform the UK energy landscape from transportation to grid.

Minister for Investment Gerry Grimstone said: ‘The Faraday Institution’s vital research into energy storage is pivotal for meeting our net-zero commitments, particularly as we shift to low-emissions transport on our roads and in our skies. I’m delighted that we’re continuing to support their valuable work as part of our commitment to strengthen the UK’s science and research sector, ensuring we build back greener from the pandemic.’

Find out more about Professor Peter Bruce's work into solid-state batteries on the Faraday Institution's website.