A journey 800 years in the making… 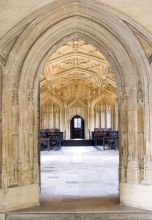 Built between 1427 and 1483, the Grade I listed Divinity School is the oldest surviving purpose-built University building and was originally used for lectures, oral exams and discussions on theology. Today, it provides an impressive venue space and is available for public hire.

First opened to scholars in 1602, the Bodleian Library is one of the oldest libraries in Europe and, with over 12 million printed items, is second in size in Britain only to the British Library. It incorporates an earlier 15th century library built to house books donated by Humfrey, Duke of Gloucester. It is Grade I listed and open to the public.

This lower floor of the 17th century addition to the Bodleian Library is Grade I listed and used for meetings of Convocation, whose key function today is to elect the Chancellor of the University. It is also hired out as a venue for wedding ceremonies.

The theatre was designed by Sir Christopher Wren and commissioned by Gilbert Sheldon, Archbishop of Canterbury. It is the University’s official ceremonial hall, used for graduation ceremonies, Encaenia – at which honorary degrees are awarded – and meetings of Congregation, the University’s supreme governing body. It is Grade I listed and open to the public.

Known originally as the Old Ashmolean Building, it is the world’s oldest surviving purpose-built museum building, designed to house the collection of Elias Ashmole, one of the founding Fellows of the Royal Society. It houses an unrivalled collection of historic scientific instruments. It is Grade I listed and open to the public.

This Grade I listed building was originally designed to house Oxford University Press. Today it provides office space for the University’s Vice-Chancellor and senior members of the Bodleian Library.

This monumental circular domed building – one of Oxford’s most impressive pieces of classical architecture – was built with money bequeathed by Dr John Radcliffe and originally designed to house a library endowed by him. Today it is Grade I listed and contains two reading rooms. It connects via tunnel to an underground book-store, built in 1912, and to the Bodleian Library.

On 27 January 1941, the first dose of penicillin was given intravenously at the Radcliffe Infirmary. The building was acquired in 2003, was refurbished in 2012, and is now the Radcliffe Humanities building.

Built to house the cabinet of curiosities that Elias Ashmole gave to the University in 1677, the Ashmolean is the University’s museum of art and archaeology. It contains world famous collections ranging from Egyptian mummies to contemporary art, telling human stories across cultures and time. It is Grade I listed and open to the public.

Acquired in 1853, the 70 acres of University Parks on the west bank of the river Cherwell have been developed and managed by the University ever since. The Parks provide recreational space for members of the University, Oxford residents and visitors. 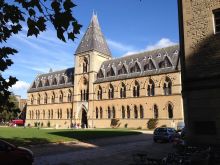 Founded in 1860 as the centre for scientific study at the University, this stunning example of neo-Gothic architecture now houses internationally significant collections of geology and zoological specimens, including the Oxfordshire dinosaurs, the Dodo… and a colony of nesting swifts! It is Grade I listed and open to the public.

Formerly the chapel to the Radcliffe Infirmary building, to which it was originally connected by a pitched roof corridor, the Chapel contains notable stained glass in the Pre-Raphaelite style. It received extensive refurbishment in 2016 and is now used to host lecture, drinks receptions, small exhibitions and dinners. It is Grade II listed and open to the public.

Designed in the style of a Jacobean mansion, the Schools were built for the organisation and administration of University examinations. One of the largest buildings owned by the University, it is still used for these today but also provides space for lectures, meetings and conferences.

Located in a building behind the Museum of Natural History, the museum was founded when General Pitt Rivers, an influential figure in the development of archaeology and evolutionary anthropology, gave his collection of more than 26000 objects to the University – today it houses half a million. The Museum is Grade I listed and open to the public.

Formerly the Radcliffe Infirmary Outpatients’ Wing, the building was empty from 2007 when outpatients’ services were transferred to the John Radcliffe Hospital in Headington. The University completed an extensive refurbishment of the building in 2016, transforming it into a new research and teaching centre for Primary Care Health Sciences.

Originally known as the New Bodleian, the Grade II listed Weston Library was built to provide much needed additional library space for readers and for five million books. It was designed by Sir Giles Gilbert Scott and opened by George VI. It underwent a major renovation in 2015, including large public spaces, and was shortlisted for the Stirling Prize for building of the year.

Acquired in 1996, the Old Road Campus in Headington is dedicated to medical science research and is a key site for the University due to its proximity to the hospitals and research facilities.

In partnership with other stakeholders, the University is developing a comprehensive vision for the site to help unlock its potential and bring economic benefits to the city and the region.

Acquired in 1998, the University has a strategic vision to develop and expand this four-acre site over the next 15 years. 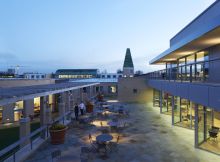 Constructed on the site of the old railway station, this modern building incorporates a classical outdoor amphitheatre, columns and cloisters and large outdoor spaces. A new wing was added in 2012 and opened by HRH Prince of Wales.

Acquired in 2003, the ROQ is a 10-acre plot of land in central Oxford. The University’s vision is to create an attractive, integrated site with state-of-the-art facilities, providing a vibrant academic community with abundant opportunities for collaboration.

The 7-acre site of the Park Hospital for Children in Headington was acquired in 2013. Adjacent to the Old Road Campus, it is being developed according to a combined site masterplan.

Located on the ROQ site, the Andrew Wiles Building is home to the Mathematical Institute. Alongside the building's stunning architectural features, its surrounding granite 'Penrose tiling' pavement, inset with stainless steel bands, was inspired by notable mathematician and physicist Sir Roger Penrose.

Also on the ROQ site, architects Herzog & de Meuron designed this stunning cylindrical building to promote open discussion, interaction and collaboration and to resonate with the University's Radcliffe Camera and the Sheldonian Theatre. It contains Europe's largest double-glazed window and made the Stirling Prize building of year shortlist in 2016. 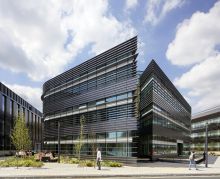 Located on Old Road Campus, the Big Data Institute houses around 550 staff and researchers from the University’s Medical Sciences Division and the Nuffield Department of Population Health. The four-storey research centre focuses on the analysis of large, complex and diverse data sets for research into the causes, consequences, prevention and treatment of disease.

Opened in 2018 by Sir Tim Berners-Lee, the Beecroft Building is the Physics Department’s first new major research facility for over 50 years and accommodates around 200 theoretical and experimental physicists. Designed with sustainability in mind, the building utilises ground source heat, combined heat and power and demand-led ventilation. 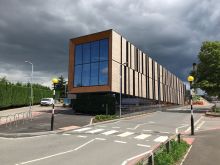 Located at the John Radcliffe Hospital, the Wolfson Building provides purpose-built facilities for the Wolfson Centre for the Prevention of Stroke and Dementia, as well as research space for the Wellcome Centre for Integrative Neuroimaging. Both of these units are part of the University’s Nuffield Department of Clinical Neurosciences within the Medical Sciences Division.