The killing of Cecil the lion has caught the public's attention: he was one of the lions fitted with a GPS collar as part of Oxford University research led by Andrew Loveridge.

UPDATE: You can read a response to Cecil's death from Oxford's Wildlife Conservation Research Unit (WildCRU).

Below we revisit an interview with Andrew about his research first published in 2012. You can support WildCRU lion research here. 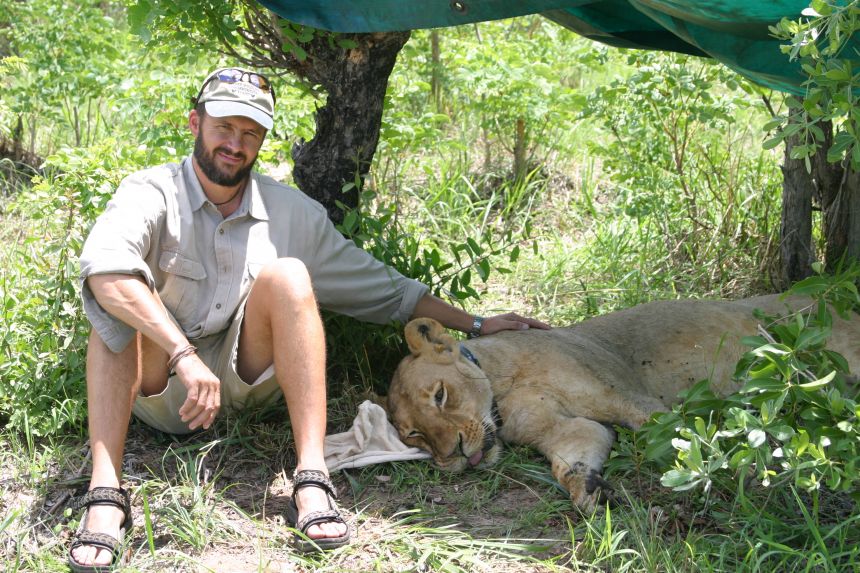 They are one of the world’s most charismatic big cats, but what does it take to understand the lives of wild lions?

Someone who knows is Andrew Loveridge of Oxford University’s Wildlife Conservation Research Unit (WildCRU), who has been studying lions in Zimbabwe for over a decade and recently won the SATIB Trust Award for his lion biology and conservation work.

I asked Andrew about how he tracks and studies lions, gaining insights into lion behaviour, and how people can live alongside these iconic predators…

OxSciBlog: What are the challenges of studying lions in the wild?
Andrew Loveridge: Lions tend to live in the last wilderness areas of the planet - and these are naturally remote and often fairly inhospitable to people (the reason they remain wilderness areas in the first place). Most people visualise Africa as being Disney-like wide open plains, and while plains habitats do exist in Africa, much of the continent is more densely wooded.

Hwange, the National Park we work in, is one such place being thickly wooded bushland-savannah with very few access roads. Lions in this ecosystem have home ranges in excess of 300km2 so they are typically tricky to find and study.

Monitoring enough of the population to provide a meaningful scientific insight into population processes and behaviour presents quite severe logistical challenges. We overcome this by covering extensive areas in 4X4 vehicles - often spending weeks at a time camping in remote areas of the park, by using technology such as GPS radio-collars (and recently GPS collars that return our data via satellite) and having access to a micro-light aircraft which helps us locate lions more easily.

Of course all this requires considerable funding to put in place and maintain, so outside the field the biggest challenge is raising the funding to maintain the study. We have been very fortunate in recent years to have received substantial grants from Panthera, Thomas and Daphne Kaplan, and recently the Robertson Foundation, as well as ongoing support from the SATIB Trust.

OSB: How can fieldwork studies help to inform conservation efforts?
AL: A common misconception is that lions are common and widespread in Africa. Whilst it is true that lions are commonly sighted in some of Africa’s well protected photographic safari destinations they fare less well in areas with limited or no protection. In such areas they compete with burgeoning human populations for limited space and resources. In the last 50-100 years the geographic range of the African lion is thought to have declined by 80%.

Surprisingly, for such an iconic and well known species, even basic biological statistics such as population size and crude population trends are unknown for many (if not most) lion populations in Africa. Along with our more academically-orientated scientific work we provide local managers and decision makers with the baseline information they need to adequately manage lion and other wildlife populations. In this way our work has a direct influence on conservation planning and policy.

We are only just learning what long term effects human activities, such as trophy huntingand retaliatory killing over livestock loss have on lion populations. A better understanding of these issues helps African conservationists to preserve and manage a species that has huge economic, ecological and cultural importance. Robust conservation decisions need to be based on reliable and detailed biological information.

OSB: What surprises about lion behaviour has your research revealed?
AL: Lions are probably one of the best-studied mammalian species, nevertheless, they still do things that surprise and intrigue our research team. Possibly one of the most intriguing aspects of lion behaviour is their wide ranging behaviour and ability to move over extensive areas. Understanding these movements is one of the key challenges in protecting lion populations because wide ranging carnivores frequently come into conflict with people. Protected areas need to be large to accommodate the ranging behaviour of large carnivores.

The surprisingly extensive movement of our lions was recently illustrated by a male lion that moved from our study area in Hwange National Park, Zimbabwe, to Livingstone town in Zambia. This movement took just over a month and in this time the lion walked around 220km. He crossed the 100m wide Zambezi River below Victoria Falls, negotiating the substantial white water rapids.

We have recorded extensive ranging movements in the past particularly in young dispersing males. However, this is longest movement and this particular study animal was 10 years old - which makes this behaviour even more intriguing. This demonstrates how little we actually know about movements of lions between regional populations. This is crucial information if we are to avoid population isolation which could spell disaster for the genetic health and long-term viability of large carnivore populations.

The other unique aspect of lion behaviour revealed by our study is the lions’ unusual behavioural responses to the local ecosystem. In the dry season in Hwange National Park water is provided for wildlife at artificially pumped waterholes. These attract high abundances of prey species and our research has revealed that lions configure their rangesto ensure access to this rich prey resource.

Elephants are the most locally abundant herbivore in the area. Because of their massive size elephants are usually not troubled by lions, however lions in our study area have learned to pick out and kill even quite large elephant calves. Elephants make up a significant proportion of lion diet in the ecosystem, particularly in dry years when elephants are stressed by shortage of browse and water.

OSB: How can this research help people to live alongside lions?
AL: The research team in Hwange has just completed the first phase of a human-wildlife conflict project, focused on conflict with lions, but also including species such as the spotted hyaena in the research. This phase has focussed on understanding both the ecological and human economic and sociological factors that contribute to conflict situations. Understanding the root causes of human-wildlife will hopeful allow us to implement locally suitable interventions in the next three-year phase of the project, funded by Panthera and the Robertson Foundation.

In the nearby Makgadikgadi ecosystem in Botswana a recent WildCRU study discovered that lions feed almost exclusively on wild prey when it is seasonally abundant, but in periods of wild prey shortage they switch to killing perennially abundant domestic livestock. Lions appear to weigh up the considerable risks of killing domestic stock by only doing so in times of wild prey scarcity. This pattern is mirrored in the Hwange ecosystem. Here we have found that lion predation on livestock peaks in the wet season.

There are two reasons for this: Firstly water is freely available in thousands of ephemeral waterholes and wild prey disperses widely throughout the ecosystem. This makes wild prey more difficult and less predictable for lions to find. At the same time people in surrounding communities plant their crops in the wet season. Livestock guarding is neglected as people focus on tending their fields, leaving domestic animals vulnerable to predation.

Understanding the underlying ecological processes is the key to putting in place appropriate and successful interventions to ease or eliminate human-wildlife conflict. It would be pointless and expensive to implement inappropriate or ill conceived interventions that do not address the root causes of the problem. To address some of the conflict problems we are designing suitably targeted livestock husbandry systems, investigating the potential use of predator proof fencing and seasonal protective structures. We are employing local men to assist villagers to improve livestock protection and to deter predators.

OSB: How will the SATIB award/land rover help in your work?
AL: It is a huge honour to accept the 2012 SATIB Award, especially knowing how passionate and dedicated Brian Courtenay and the other Trustees of the SATIB trust are to conservation of African wildlife and wild places. It has also been a great opportunity to raise the profile of the lion project and what we are trying to achieve in conservation of the species and its habitat.

Like the species we study, lion researchers have to cover extensive areas of remote and often inhospitable wilderness. Having a tough and reliable off-road-capable research vehicle, such as the specially fitted Land Rover Defender LWB that came with the SATIB award, is an absolutely essential part of undertaking research on this species. In the coming year the project team will also be undertaking survey work in the surrounding region, so having a new vehicle will be extremely helpful.

OSB: What's next for the Hwange Lion Project/your research?
AL: Long-term biological studies are relatively rare. The Hwange Lion Project has been running for just over 12 years, during which time we have gained a unique insight into the population dynamics and conservation of this particular lion population.

The core of our effort is to maintain the monitoring work and continue to add to this long-term understanding. In addition to this we are continuing undertake research on human-wildlife conflict at the borders of Hwange National Park and this year we will be embarking on some exciting new initiatives to work with local communities to reduce levels of human-lion conflict. In doing so we hope to reduce the number of lions killed by angry herders over loss of domestic stock.

Another exciting component of the project is an initiative to identify and conserve habitat corridors that that link the core Hwange lion population with other regional protected areas. We have already found evidence that these exist and it is important that habitat corridors are recognised and protected in the face of ever expanding human populations.

My other research includes a three-year project, funded by the Darwin Initiative for Biodiversity, on the sustainable management of leopards in Zimbabwe.

Why some bugs never fade

Exploring the Higgs boson's dark side