Simon Hooker is a Professor of Atomic and Laser Physics at the University of Oxford, and Chris Arran and Robert Shalloo are two of his graduate students. They discuss the group's work on developing plasma accelerators for real-world applications.

In our group at Oxford's Department of Physics, we combine high-intensity lasers and plasmas to build extremely compact particle accelerators. Our recent experimental results, published in Physical Review Letters, demonstrate a new way to do this - bringing us a step closer to seeing these accelerators widely used in commercial and medical applications.

When we think of particle accelerators - machines which accelerate particles such as electrons and protons to almost the speed of light, we tend to think of the Large Hadron Collider at CERN, which is the largest machine ever built at 27 km in circumference. But of the more than 30,000 particle accelerators in operation worldwide today, fewer than 10% are used for scientific research and only 1% specifically in high energy particle physics. So what are the rest used for?

Particle accelerators have been used to investigate new fuel sources and study holy relics - but the vast majority are used in medicine and industry. In medicine, accelerators are used for the diagnosis and treatment of cancer, to produce high quality beams of X-rays, and for advanced medical imaging. In industry, accelerators are an integral part of processing a broad range of products, from treating foodstuffs for increased shelf life to microelectronics inside smartphones. In fact, it is estimated that every year accelerators treat over £350 billion worth of products. But almost all of the accelerators used for these applications rely on technology developed nearly a century ago.

In recent years, scientists around the world have been working to develop new accelerators powered by the interaction of very intense laser pulses and plasmas. In these "laser wakefield accelerators" an intense laser pulse is fired into a gas, which ionizes it to form a mixture of negatively charged electrons and positively charged ions, at temperatures approaching a million degrees. As the laser pulse travels through the plasma it pushes the plasma electrons out of its way, setting up a "plasma wake" behind it - just as a boat moving across a lake creates a wake. The alternation of positive and negative charge densities within the plasma wake sets up huge electric fields, equivalent to a voltage difference of 10 million volts across the diameter of a human hair. These intense fields can be used to accelerate charged particles to high energies in a distance hundreds to thousands of times smaller than in a conventional particle accelerators, dramatically shrinking the size and cost.

Laser-plasma accelerators have already been used to generate electron beams with similar energies to that used in synchrotron light sources - like the Diamond Light Source near Oxford, but in an accelerator stage only a few centimetres long, rather than in a stadium-sized machine. However, the lasers used could only fire a few times per second, severely limiting the applications of these compact accelerators.

We recently proposed a new approach, called the "multiple-pulse laser wakefield accelerator" (MP-LWFA) which could increase the repetition rate of laser-plasma accelerators by a factor of a thousand.

The idea is to drive the plasma wake with a train of lower energy laser pulses, rather than with a single, high-energy pulse. If the pulses are spaced correctly they "kick" the plasma in time with the plasma motion driven by the earlier pulses, in just the same way that repeated, well-timed pushes of a swing result in a large amplitude oscillation. This change of approach allows very different types of laser to be used, which can deliver thousands of pulse trains per second and with high "wall-plug" efficiency. The ultimate goal is to generate synchrotron-like electron and X-ray beams from a laboratory-scale device. 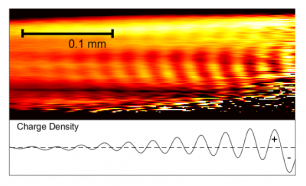 A snapshot of a laser wakefield produced in our experiment. The image shows the wake created behind a laser pulse travelling left to right, leaving behind areas of alternating positive and negative charge.

Recently we demonstrated these ideas in an experiment performed at the Rutherford Appleton Laboratory near Oxford. In that work, we fired a train of laser pulses into a plasma and measured the size of the plasma wake which was driven. We found that, just as expected, the strength of the wake was maximized when the laser pulses were separated so that they kicked the plasma in time with the plasma oscillation driven by the earlier pulses. In contrast, if the pulse separation was mismatched to the plasma oscillation then the plasma wake disappeared. Detailed analysis showed that the experimental data was in very good agreement with our theoretical models, confirming that we have a clear understanding of the physics at play.

Having demonstrated the concept, future work will be aimed at generating electron beams and working with experts in laser physics to develop an architecture for a new generation of compact laser-driven accelerators with properties useful for real-world applications.