Ancient Christian relics are objects that survive from ancient times, often associated with a saint's body or their belongings, and usually kept as objects of historical interest or spiritual devotion. For the first time, a large team of researchers will use radiocarbon dating, genetics and theology to learn more about the origin and movement around the world of religious relics that have been attributed to specific individuals.

The researchers will use the latest scientific methods, such as higher precision radiocarbon dating that can pinpoint chronologies; DNA analysis that establishes common ancestries and the probable geographic origin of an individual; and historical and material evidence to identify objects of special interest and set scientific data in their proper context.

Oxford has a longstanding reputation in the study of the remains of relics. Researchers have used the Radiocarbon Accelerator Unit to date the Shroud of Turin, regarded by some as the burial cloth of Christ. The concentration of radiocarbon in all living things is relatively constant over time and traces of the C14 isotope contained inorganic substances, including the cloth, can be measured by the Unit to provide its age. Three university labs were involved and between them concluded that the cloth was manufactured between 1260 and 1390. 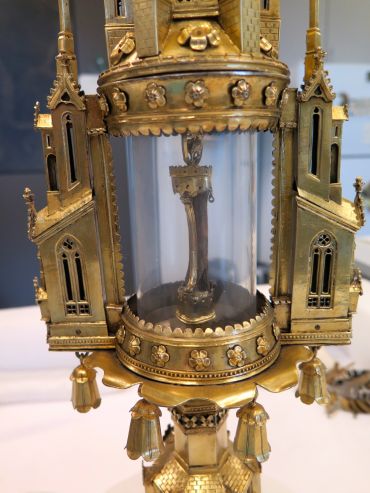 Finger bone thought to be of St John the Baptist is contained in a ‘monstrance’ at a museum in Kansas, USA.

Professor Thomas Higham of Oxford's School of Archaeology led a team dating six small bone fragments found on an island in Bulgaria named Sveti Ivan (translated as St John). The bones were of a man who lived in the Middle East at the same time as Jesus, according to Professor Higham. In 2014 the team also analysed remains of a small finger bone attributed to John the Baptist that was associated with the famous Guelph Treasure, a medieval collection of relics and ecclesiastical art that came to be associated with the European royal House of Guelph. The sample from the finger bone was dated to 660-770 AD, which meant it was too young for St John the Baptist. However, the researchers are still intrigued as to why it is much older than the rest of the Guelph relic collection, which started after 1100 AD.

Professor Higham, who is Deputy Director of Oxford Radiocarbon Accelerator Unit, said: 'It's the first time that scholars from many different disciplines have collaborated in the ongoing study of ancient religious relics. We will not be able to say with 100% certainty that they belong to a particular individual who is celebrated as a saint. Nevertheless, through gathering a body of evidence we will be able to say whether or not the remains originate from the same time and place as the attributed saint.'More recent work has included an analysis of remains that were thought to be of St Luke, St David, and the True Cross – remains of the cross upon which Jesus was crucified, according to Christian tradition. The results of this latest work are not yet published.

Dr Georges Kazan of Oxford University's School of Archaeology said: 'By analysing remains attributed to specific individuals, we hope to build up a picture of when and how relics appear in the historic record and whether any are related to each other in time and space. The Christian belief that relics were imbued with miraculous powers, granting benefits both in this world and the next, resulted in widespread demand and circulation, particularly in The Middle Ages. Scientific analysis has now shown that a number of relics attributed to specific saints are counterfeit or misidentified, but others may be of the time and place where a particular "holy" person lived.

'Whereas in the past larger samples were needed for dating, we now have the latest scientific processes that allow us to establish the true date from tiny samples – the size of a pinch of salt.'