Parts of the Roman theatre in Catania have survived into the modern day.

An Oxford classicist has worked with Italian secondary-school students to create an award-winning new exhibition in Sicily, cataloguing stone inscriptions from the Roman period.

The exhibition, which is housed in the Norman castle that now serves as Catania’s civic museum, features artefacts between 1500 and 2500 years old, including funerary inscriptions, sculptures, and fragments of buildings, as well as video installations created by the students.

These texts are important because they are contemporary documents. They very often provide information about specific events and private individuals, of a type that is not recorded elsewhere. Inscriptions provide a vast body of information on religious beliefs, naming practices, language, and much more.

Catania was originally a Greek city, and was re-founded as a Roman colony, so the inscriptions are in a mixture of Greek and Latin. The inscriptions provide valuable information both about economics and diplomacy in ancient Catania, and about the private lives of individuals in the city.

One intriguing item is a funeral inscription for a Jewish Roman citizen called Aurelius Samohil (i.e. “Samuel”), from 383 AD (pictured below). This is written in a mixture of Latin and Hebrew, and constitutes the longest Latin text from the ancient Jewish diaspora in the Roman world. The inscription contains a triple warning to posterity not to break into the tomb where Aurelius Samohil and his wife Lassia Irene were buried. This and other texts suggest there was a strong Jewish community in Catania. 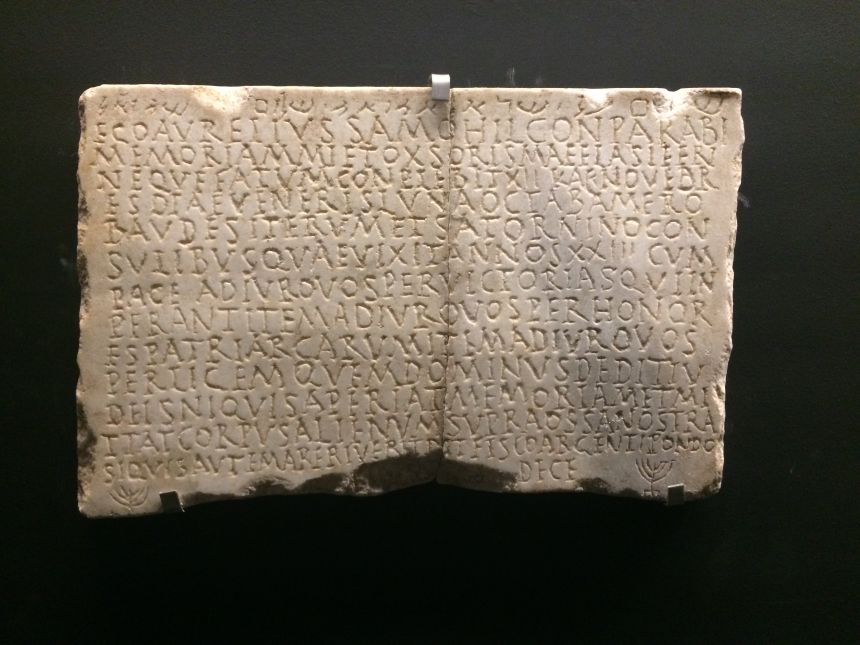 "The warning against breaking into or reusing the tomb is particularly nice and unusual because it appeals simultaneously to the authority of the Roman emperors, the Jewish patriarchs, and Talmudic law." - Jonathan Prag

The students, who won a prize for their work from the Italian Ministry of Education, worked on the exhibition between 2015 and 2017. They were involved in locating, cleaning and recording the exhibits, as well as presenting them in novel ways – for instance, they designed a reconstruction of a columbarium, a type of Roman tomb. They will use the prize to visit Oxford this autumn.

“The enthusiasm and engagement of the students went well beyond anything I had seen elsewhere or expected,” said Dr Prag, who undertook the project as a Knowledge Exchange Fellow at the Oxford Research Centre for the Humanities (TORCH). “They did not have a background in classical studies, but they brought serious artistic flair and a very high level of observation and skill. The end result – a highly professional permanent exhibition – is certainly beyond my original expectations.”

He adds that one of his favourite exhibits is “the rather wonderful video of a very elderly retired stone mason from Catania whom the students found and interviewed, in order to learn about the actual practicalities of engraving on stone”. The students used what they learned from him to create their own inscription as a record of the exhibition.

Dr Prag is now working on a larger project called I.Sicily, which aims to create an online archive of Sicilian inscriptions, reflecting the diverse languages spoken on the island in ancient times.