Raising the minimum age threshold for trophy hunted male lions and accounting for additional deaths caused by poaching and conflict with people could increase hunting sustainability, suggests a new study led by the University of Oxford, published today in Scientific Reports.

Globally, many species face severe population declines as a result of human pressures, with African lions being no exception. The population of wild African lions was around only 25,000 in 2015, and this is predicted to decline by 50% over the next two decades. Key drivers of this include habitat loss due to agriculture, declining prey populations, conflicts with livestock farmers, illegal poaching, and (in some cases) unsustainable trophy hunting.

Trophy hunting is widely practiced in Africa. It can be considered as a conservation strategy, however its contribution to lion conservation can also be highly contentious. If well managed, trophy hunting can protect wildlife habitats from conversion to agriculture and generate revenue for conservation and local economies. Unsustainable trophy hunting, however, can lead to rapid population declines.

Most trophy hunting areas across Africa have a minimum age threshold for hunted male lions of six years. However, this requires professional hunters to be able to accurately age animals before killing them, using physical traits such as mane size and colour, teeth yellowing, nose pigmentation, and scarring. But previous research suggests that hunters often struggle to reliably age lions between 4 and 7 years old, with a tendency to over-estimate the age of individuals within this range. 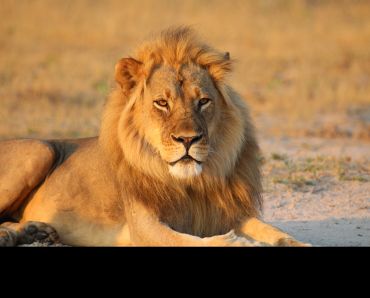 Male lion photographed in Hwange National Park, Zimbabwe. Image credit: Justin Seymour Smith
In this newly published study, Dr Andrew Loveridge and colleagues from the University of Oxford’s Wildlife Conservation Research Unit (WildCRU, part of the Department of Biology) and the Swedish University of Agricultural Sciences, investigated how trophy hunting interacts with other human-induced pressures on African lions. The group modelled the impacts of poaching, conflict with humans, and trophy hunting using a range of age thresholds on a simulated population of 500 lions in 40 prides, which was developed using data from a 20-year study of lions in Hwange National Park, Zimbabwe. For the first time, their model also tested the effects of professional hunters misclassifying lion ages on the sustainability of trophy hunting.

The results showed that trophy hunting of younger males in areas with higher levels of poaching or conflict led to severe population declines, but that restricting hunting to older males was more sustainable.

Under conditions with low levels of conflict (with 0.4% monthly mortality) and high levels of hunting (a quota of 18 lions per year), minimum age thresholds of at least seven or eight years were required to maintain stable populations, with a threshold of eight years being the most sustainable. These results were replicated when hunter aging estimate errors were incorporated into the simulations.

According to the authors, the results clearly indicate that trophy hunting should be limited to older male lions and that a precautionary approach should be taken when setting hunting quotas for large carnivore populations that are affected by poaching and conflict with livestock owners.

Dr Andrew Loveridge (WildCRU, University of Oxford) said: ‘These results have great relevance to the conservation of African lions because the 6-year minimum age threshold has been widely implemented by areas that allow trophy hunting. Since error in age assessment by professional hunters could potentially have significant effects on population viability, particularly when accompanied by other anthropogenic pressures, we suggest raising minimum age thresholds for trophy hunted lions to animals older than 8 years as the most sustainable approach.’

The paper ‘Anthropogenic edge effects and aging errors by hunters can affect the sustainability of lion trophy hunting’ has been published in the journal Scientific Reports.

The study also involved researchers from the Zimbabwe Parks and Wildlife Management Authority and the Swedish University of Agricultural Sciences.