3D illustration of the Martian surface and dust in the atmosphere. Image credit: Shutterstock.
Published

Following two large meteorite impacts on Mars, near-surface seismic waves have been recorded for the first time on a planet other than Earth. The data, analysed by an international team involving University of Oxford researchers, has revealed valuable new information about the structure of the Martian crust. The results have been published today as two papers in the journal Science. 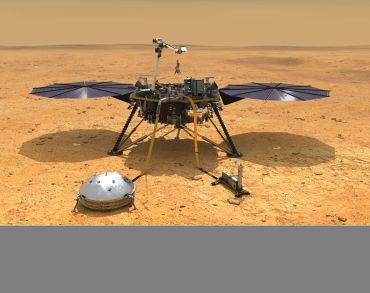 Illustration showing NASA's InSight spacecraft with its instruments deployed on the Martian surface. Image credit: NASA/JPL-Caltech.
On 24 December 2021, highly unusual seismic waves were recorded by the NASA InSight lander, which has been recording seismic activity (or ‘marsquakes’) on the Red Planet since November 2018. To investigate the potential source, the InSight Science Team examined aerial photographs captured by high resolution cameras on NASA’s Mars Reconnaissance Orbiter. Images taken by the orbiter between 24 and 25 December 2021 revealed a large impact crater about 3,500 kilometres (2,200 miles) from InSight. Using the same method, the researchers then re-examined older data recorded by the lander to investigate another unusual seismic wave recorded during September 2021. This was mapped to a slightly smaller crater just under 7,500 kilometres (about 4,700 miles) from InSight.

Dr Benjamin Fernando (Department of Physics and Department of Earth Sciences, University of Oxford), co-chair of the Impacts Theme Group for InSight, said: ‘These are the biggest fresh craters we have ever seen form anywhere in the Solar System. The larger one is around 150 metres across (about one and a half times the size of Trafalgar Square) and the blast zone is around 35 kilometres across – this would cover most of the area inside the M25.’

The sheer force of these impacts generated the first seismic waves to have reached the InSight lander by propagating through the crust, rather than through the planet’s deeper mantle and core. Consequently, the data contains valuable new information about the structure and composition of the crust, which up to now has remained largely unknown.

In particular, researchers hope that this can help solve a centuries-old mystery, known as ‘the Martian dichotomy.’ Dr Fernando explained: ‘A really distinct feature of Mars is a sharp contrast between the northern and southern hemispheres. Whilst the southern hemisphere is mountainous and covered in craters, the northern hemisphere is relatively flat. A popular theory for this dichotomy is that the crusts in the north and south may be composed of different materials and have very different evolutionary histories, but the new data suggests that the crusts may have surprisingly similar structures at depth.’ 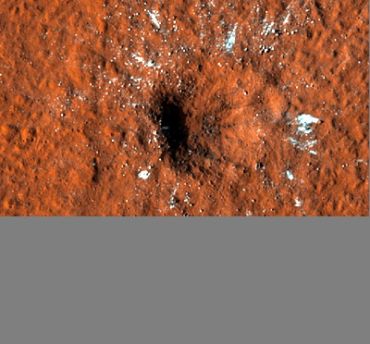 This crater, which formed on Christmas eve, was imaged by the Mars Reconnaissance Orbiter. InSight detected the impact that created it. The meteorite impacted from the left, and excavated into a layer of water ice which shows up as white chunks in the image. Credit: NASA/JPL-Caltech/UArizona.
Another unexpected discovery was that the larger meteorite had broken through into a layer of underground water ice: the furthest south that ice has ever been found on Mars. Images captured by the Mars Reconnaissance Orbiter showed large blocks of pure ice ejected from the shallower layers of the crater.

The research team also hope that the data will provide important clues into how Mars formed and evolved. Since the composition of the crust is the result of early dynamic processes in the planet’s mantle, this can indicate what conditions were like billions of years ago.

Dr Fernando said: ‘One particular thing that we plan to look into here at Oxford is what the best set of criteria is to differentiate impact events from other marsquakes, taking account of everything that these impacts have taught us. This will be particularly important for future seismology missions, including those to the Moon and the icy moons of the outer Solar System’.

‘Usually we would expect an impact such as this only once every few years, so to observe two within the space of 100 days is extraordinary’ added Dr Fernando. And it may be just in time: since May 2022, InSight has been gradually losing power due to dust accumulating on its solar panels. It is expected to be no longer operating by December 2022, which will conclude a mission that has successfully detected more than 1,300 marsquakes. This includes the largest quake ever observed on another planet: an estimated magnitude 5 temblor on 4 May 2022.

The mission has had a strong link with the University of Oxford from the start, with researchers from the Department of Physics playing an integral role in developing one of the main instruments onboard: the short period Seismometer (SEIS-SP). In particular, the Oxford team were responsible for packaging the sensor 'chips' for the instrument, integrating them with control electronics, ensuring that they will survive in the space and Martian environment, and testing the sensor performance.

Libby Jackson, Head of Space Exploration at UK Space Agency, said: ‘It’s fascinating to see the data returned from InSight’s UK-built seismometer, giving us a clearer picture of Mars’s structure and, in turn, bringing us a step closer to understanding how the planets of our solar system were formed. As the global space community increases its focus on Mars exploration, we are pleased to contribute to the InSight programme with Imperial College London and the University of Oxford, and look forward to seeing what this new information will lead to.’

‘These results are likely to be some of the last big discoveries made by the InSight lander, but even if this is the case, it will be a lovely ending to a highly successful mission’ concluded Dr Fernando.

The studies, ‘Surface waves and crustal structure on Mars’ and ‘Largest recent impact craters on Mars: Orbital imaging and surface seismic co-investigation’, have been published in Science.

A recording of the meteorite impact captured by InSight's seismometer  on 24 December 2021 can be heard on the NASA InSight Mission website. 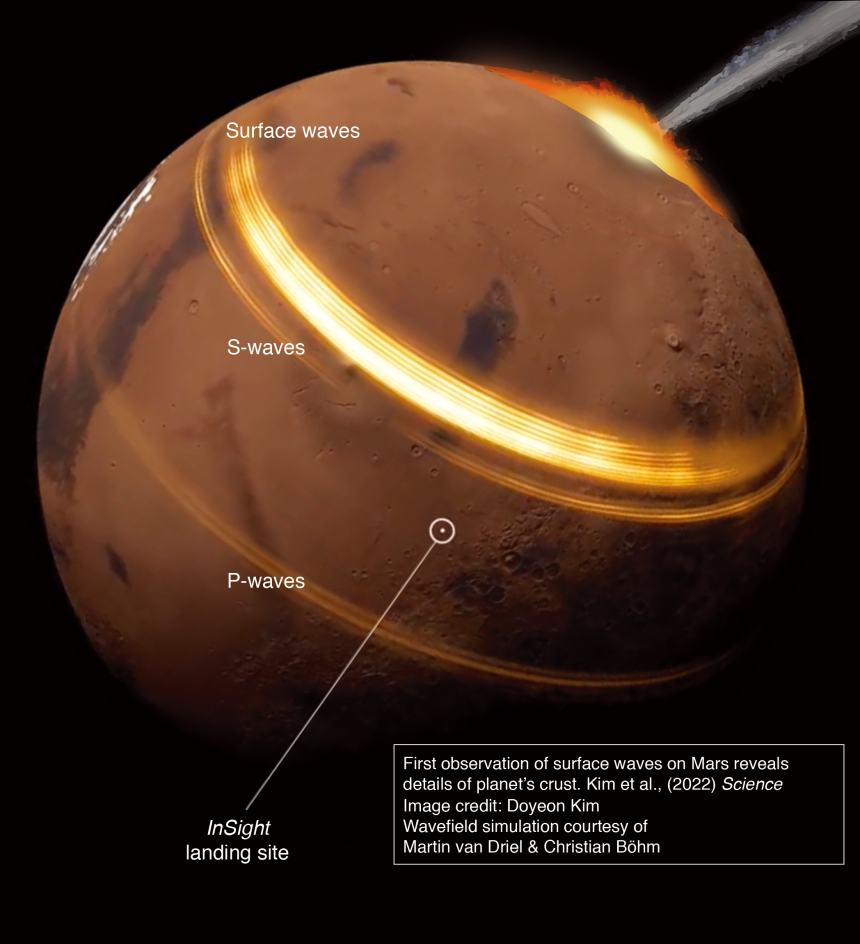