Image: NASA Artist's impression of Perseverance reaching Mars. At the point it enters the atmosphere, it will be travelling at more than 15,000 km/h and its heat shield will reach more than 1,300 degrees centigrade during the descent

We may not have found life on Mars, but there is considerable excitement in the Oxford scientific community about the imminent possibility of detecting the landing of NASA’s Perseverance Rover using InSight, another spacecraft which is already on the red planet.

University physicists believe that, for the first time, they might be able to ‘hear’ a spacecraft land on Mars, when Perseverance arrives at Earth’s ‘near’ neighbour in about a month’s time around 18 February.

And NASA’s new probe is certainly not arriving quietly. The unmanned craft will plunge through the Martian atmosphere at enormous speeds, accompanied by a sonic boom created by its rapid deceleration. At the point it enters the atmosphere, it will be travelling at more than 15,000 km/h and its heat shield will reach more than 1,300 degrees centigrade during the descent.

NASA’s new probe is certainly not arriving quietly. The unmanned craft will plunge through the Martian atmosphere at enormous speeds, accompanied by a sonic boom created by its rapid deceleration

It will deploy two large balance masses which will hit the ground at hypersonic speeds, crashing down at a speed of 4,000 metres per second. It is these two masses which the scientists are hoping will create detectable seismic waves - which will travel the 3,452 kilometres between Perseverance’s landing site and InSight’s location.

The ears to ‘hear’ the impact are the InSight probe, which was sent to Mars three years ago to listen for seismic activity and impacts from meteorites. Parts of the spacecraft were built at Imperial College London and tested in the Department of Physics at the University of Oxford.

InSight detects seismic activity (marsquakes) to help scientists understand better the interior structure of Mars. Although many hundreds of marsquakes have been detected since InSight’s landing in 2018, no impact events (meteorites hitting the surface and producing seismic waves) have been detected. Impact events are of particular interest because they can be constrained in timing and location from pictures taken by orbiting satellites, and thus used to ‘calibrate’ seismic measurements.

So, the arrival of Perseverance Rover potentially offers the first opportunity to detect a known, planned landing of a foreign body on the surface of the planet.  It could provide a wealth of evidence on the structure and atmosphere of Mars and has got the scientific community very excited about its potential.

According to Oxford physicist, Ben Fernando, a member of the InSight team, ‘This is an incredibly exciting experiment. This is the first time that this has ever been tried on another planet, so we’re very much looking forward to seeing how it turns out.’

This is the first time that this has ever been tried on another planet, so we’re very much looking forward to seeing how it turns out

InSight’s seismometers are potentially sensitive enough to detect Perseverance’s landing, even though this is expected to be very challenging - given the significant distance between the two landing sites. It is around the same distance as from London to Cairo. Nevertheless, the Oxford team believes the impact could potentially be detected by InSight and thus provide an immensely useful ‘calibration’.

According to Ben Fernando, ‘This would be the first event detected on Mars by InSight with a known temporal and spatial localisation. If we do detect it, it will enable us exactly to constrain the speed at which seismic waves propagate between Perseverance and InSight.’

A newly-published paper from the InSight team states, ‘Perseverance’s landing is targeted for approximately 15:00 Local True Solar Time (LTST) on February 18, 2021 (this is 20:00 UTC/GMT on Earth).’ 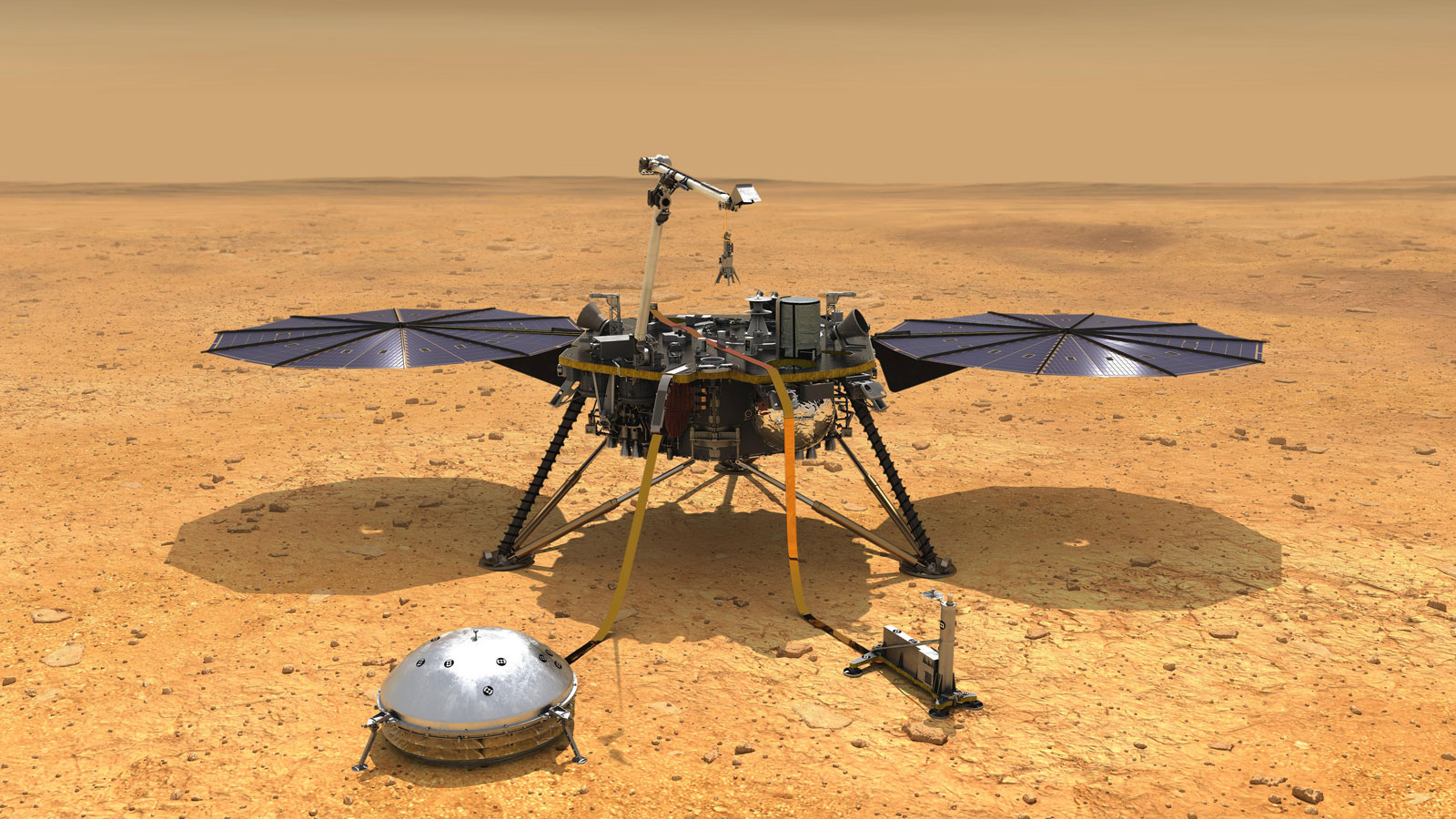 The paper continues, ‘The spacecraft will generate a sonic boom during descent, from the time at which the atmosphere is dense enough for substantial compression to occur (altitudes around 100 km and below), until the spacecraft’s speed becomes sub-sonic, just under three minutes prior to touchdown.  This sonic boom will rapidly decay into a linear acoustic wave, with some of its energy striking the surface and undergoing seismo-acoustic conversion into elasto-dynamic seismic waves, whilst some energy remains in the atmosphere and propagates as infrasonic pressure waves.’

The paper concludes, ‘We identified three possible sources of seismo-acoustic signals generated by the EDL (entry, descent, landing) sequence of the Perseverance lander:  (1 ) the propagation of acoustic waves in the atmosphere formed by the decay of the Mach shock, (2) the seismo-acoustic air-to-ground coupling of these waves inducing signals in the solid ground, and  the elasto-dynamic seismic waves propagating in the ground from the hypersonic impact of the CMBDs.’

InSight will ‘listen’ for the acoustic signal of the sonic boom in the atmosphere. But scientists think the best chance of detecting the landing will be the seismic impact of the balance masses.

The team expects to receive data from InSight within a day or two of Perseverance’s landing, after which they will investigate whether they have made a successful detection.

How is my town doing? A local view of COVID-19 reproduction rates
America’s very special relationship - with dogs.