Oxford is an independent and self-governing institution consisting of the University, its divisions, departments and faculties, and the colleges.

The colleges and halls

The 36 colleges and three societies are a core element of the University, to which they are related via a federal system.

Each college is independent and self-governing, having a charter approved by the Privy Council, under which it is governed by a Head of House, elected and appointed by the governing body directly. The governing body comprises a number of Fellows, most of whom also hold University posts.

The three societies – Kellogg College, Reuben College and St Cross College – operate very much like the other colleges but are considered departments of the University rather than independent colleges because, unlike the others, they do not have a royal charter. One of the main differences is that the governing body recommends a president, who is then appointed by Council.

There are also five permanent private halls, which were founded by different Christian denominations, and still retain their religious character today.

Undergraduates are admitted to 32 of the colleges and permanent private halls. All colleges accept applications from mature students, while Harris Manchester College is solely for mature students. 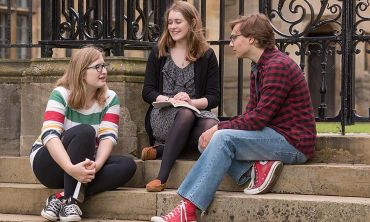 Students sat on the steps of Merton College
Campion Hall and Green Templeton, Kellogg, Linacre, Nuffield, Reuben, St Antony’s, St Cross and Wolfson Colleges admit only postgraduate students. All Souls is unique among Oxford colleges because it has no student members; all are Fellows, except the Warden.

University, Balliol, and Merton Colleges are the oldest and were established by the 13th century.

Green Templeton, which came into existence in 2008 following the merger of Green and Templeton Colleges, is the University’s newest college, and Reuben College, which was founded by the University in 2019, is the newest society.

If you are interested in undergraduate study at Oxford, please consult our information on colleges for prospective undergraduates.

Oxford University is divided into four academic divisions. Within these divisions are numerous departments, faculties and schools. Oxford’s museums, libraries and collections provide an outstanding resource for the University and work closely with divisions to deliver teaching.

Oxford University Press, one of the largest and most successful university print presses in the world, is also a department of the University, while the Department for Continuing Education exists to enable Oxford to reach students beyond the full-time student body.

There are four academic divisions within Oxford University. All have a full-time divisional head and an elected divisional board:

The Humanities Division brings together nine faculties and the Ruskin School of Art. The faculties are among the largest in the world, enabling Oxford to offer an education in arts and humanities from music and fine art to ancient and modern languages. Oxford was named as the best university in the world for arts and humanities in the 2022 QS World University Rankings by Subject.

The Mathematical, Physical and Life Sciences Division is home to the nonmedical sciences at Oxford. The nine academic departments in the division span the full spectrum of mathematical, computational, physical, engineering and life sciences, and undertake both research and cutting-edge applied work. In the Times Higher Education subject rankings for 2022, Oxford was ranked first in the world for Computer Science.

The Medical Sciences Division is the largest of the four academic divisions within the University and is internationally recognised as a centre of excellence for biomedical and clinical research and teaching. In the Times Higher Education subject rankings for 2022, Oxford was, for the 11th year running, ranked first in the world for Clinical, Pre-Clinical and Health subjects.

The Social Sciences Division brings together departments, faculties and schools committed to tackling some of the major challenges facing humanity, such as sustainable resource management, migration, global governance, justice, poverty and development. The Times Higher Education subject rankings placed the University of Oxford as number one in the world for Social Sciences in 2018, 2019 and 2022, and number one in the UK and Europe in 2020 and 2021. 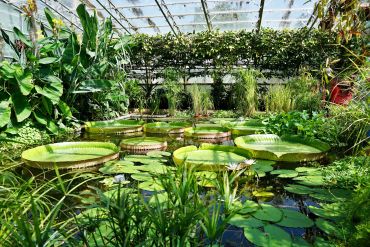 Giant Amazonian waterlilies at Oxford Botanic Garden
Gardens, Libraries And Museums of Oxford University are collectively known by the acronym GLAM, and form one of the greatest concentrations of university collections in the world. Comprising over 20 million objects, specimens and printed items, they constitute one of the largest and most important research repositories, enabling GLAM to work closely with academic departments to deliver teaching and provide students access to important material for their study, as well as drawing scholars from all over the world.

The Department for Continuing Education is one of the largest providers of continuing adult education for lifelong learning in the UK. It enrols more than 15,000 students from all over the world on hundreds of part-time programmes each year, including undergraduate and postgraduate qualifications, from certificates and diplomas to masters’ and doctoral degrees, online courses, short courses, day schools, lectures and weekend events, continuing professional development courses, and summer programmes.

Find out about the governance of the University

Find out about the senior University Officers