Fans of 'Love Island', the reality TV programme captivating the nation this summer, have ,more in common with academic scientists than they might think. Image credit: Shutterstock

If you listen to Piers Morgan, Love Island, the reality TV programme that has had 3.4 million people hooked night after night this summer, is for the ‘uneducated’ and ‘dim-witted’.

However, writing for the Daily Mirror this week, as part of her British Science Association Media Fellowship placement, Dr Holly Reeve of Oxford University’s Department of Inorganic Chemistry, revealed that fans of the show have more in common with professional scientists than you might expect.

Do your evenings involve:

Sounds like you're a scientist. An evolutionary biologist to be precise.

Dr Stuart Wigby and his team at the University of Oxford literally watch flies mating to study everything from reproduction and fertility, to changes in female behaviour (including aggression) after sex, to the link between sex, aging and number of sexual partners.

So, what can Love Island fans learn from science - and just as importantly, can the scientists learn anything from Love Island?

One of the biggest similarities between fly sex research and Love Island is the ability to control sex bias in populations (or on islands). That means that you can study the effect of having more males or females in a population on an individual's behaviour.

However, it's worth remembering that flies have very different concerns to their Love Island counterparts.

Sally Le Page from the Wigby lab says for flies, mating ‘is all about the number of offspring’, you can produce with no concern about the morality of partnerships.

In Love Island, to survive the public vote, ‘contestants effectively have to pair up in ways in which the watching public approve!’

But it's these very different concerns that make Love Island interseting.

So, what can we learn from Love Island?

Love Island essentially sets up and enforces sequential monogamy - that is, to survive (stay on the island) you need to be a couple.

It's a different setup from an evolutionary perspective where the costs and benefits of mating are different for men and women.

‘You might expect males and females to become more similar in behaviour...and, over evolutionary time, appearance too’.

Of course, things are a bit different when nature and evolution come in to play.

As Empirical Zeal explains; when it comes to flies: ‘Sex is war. It's a battle for limited resources.

"The source of sexual conflict is this: sperm is a relatively cheap resource for males to produce, whereas producing eggs and rearing offspring is a much larger investment on the part of the female.’

Which is where some of the conflict comes from on ITV each night - contestants bucking the evolutionary trend in order to win the contest.

We know how to study Love Island, but how do you study fly sex.

Studying fly sex and studying Love Island have some similarities (and some differences).

Male and female Drosophila melanogaster flies can be identified by their bottoms. Females tend to have large light coloured behinds, whereas males have smaller black ones.
From a selection of flies, you can separate them into compartments at male to female ratios of your choice... using small paint brushes (so the flies don't get damaged)!
From there, you can sit, watch and wait.

And you'll see the flies starting to mate.

Dr Wigby says: ‘It usually takes them around 20 minutes" (impressive) "so realistically you don't have to check in on them too often.'

Number of mates, fly behaviour, number of eggs laid and number of baby flies hatched can all be carefully monitored.

All in the time it takes to watch an episode (or perhaps two) of our favourite show. 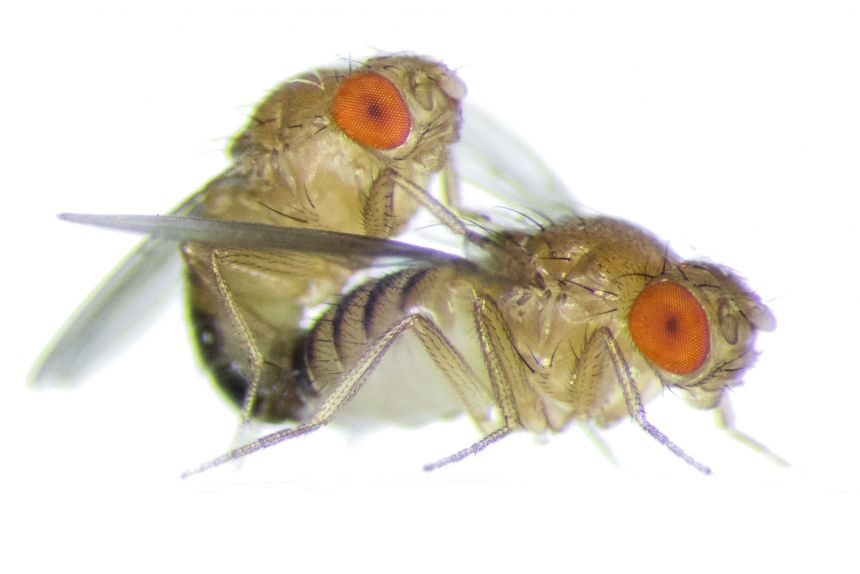 Why do scientists study fly sex?

Flies are a good model to study for a number of reasons.

Firstly, they have short life cycles, and therefore evolution can be studied much more easily than in larger animals or humans.

Secondly, particular species of flies (like Drosophila melanogaster ) are really well understood at a genetic level. That means that it's much easier to relate findings to actual genetic changes.
Lastly, it's not particularly ethical to study these things in humans, unless it's broadcast on TV...

What have we learnt from insect sex research, past, present and future?

We've learnt a lot from studying mating in animals, including in flies and other insects.

That's because ejaculate contains a cocktail of proteins alongside sperm. These proteins can lead to emotional, and over time evolutionary, changes to females. In one Wigby group study 'when males were exposed to a competitor male, matings were longer' and more of two particular sex proteins were transferred to the females. And in another, sex led to a significant increase in aggression of female flies when it came to fighting over food! The little flies got way more angry than the bigger ones.

A Love Island-esque study showed that high male biased populations led to the evolution of males who lost the ability to maintain higher fertility over successive ejaculations.
Eeek, just another reason for our Love Island males to fear more men being introduced to the island. Some other female responses to receiving sex proteins from across the animal kingdom include - spontaneous ovulation and decreased female sexual receptivity (so a lower sex drive!).

But some results are more relevant to our lives.

In fact, in 2017 Jeffrey C. Hall, Michael Rosbash and Michael W. Young won a Nobel prize for their research into the circadian rhythm (our biological clocks). Some of this research was based on our friends, the flies.

Some recent results show that aging in men can affect sperm and sex protein quality leading to significant consequences for fertility.

And finally, are there any limitations of Love Island preventing scientific conclusions?

Firstly, the population is far too attractive.  Normal populations and sex decisions rely on diverse sexual desirability. In flies, larger females and larger males are preferable as potential mates.

Secondly, the animal kingdom doesn't follow heterosexual monogamy so strictly, allowing trios (or more) and same sex coupling would be more realistic.
Perhaps we'll see that in next year's series.

This article originally appeared on the Daily Mirror online