To date, over 3.5 million people have died from Covid-19. Understanding its origins, with a view to preventing any future such pandemics, is therefore of global importance. Covid-19, known formally as SARS-CoV-2, is a coronavirus, and historically these have come to afflict humans through spill-over from wildlife sources. This was the case with the Middle East Respiratory Syndrome (MERS) outbreak in Jeddah, Saudi Arabia, in 2012, spilling-over from dromedary camels, killing 858 people; similarly the SARS-CoV epidemic (for which there is still no cure) that began in Guangdong in 2002 and killed 744 people, spilled-over from palm civets as an intermediary, transferring infection from cave-dwelling horseshoe bats.

Not surprisingly then, the finger of blame has been pointed at wildlife trade in the wet markets of Wuhan, Hubei, China, where this Covid-19 outbreak seems to have originated. Candidate species include bats, which are definitive hosts brewing coronaviruses, and both pangolins and palm civets as potential intermediaries; although the most recent genetic data suggest that the variant found in these latter species isn’t quite similar enough to the human variant to be a totally convincing source. Nevertheless, through 14th Jan to 10th Feb this year the World Health Organization (WHO) sent an investigative team to Wuhan, where part of their remit was to try to ascertain, post hoc, what animals were being sold in markets prior to closures. Their report was inconclusive, but drew attention to the particular need to monitor bat and pangolin trading.

Our investigation found that both bats and pangolins had an alibi – neither was there!

Working with our colleagues based at China West Normal University, Nanchong, and Hubei University of Traditional Chinese Medicine, Wuhan, Xiao Xiao and Zhao-Min Zhou on the ground in China, the WildCRU team had been gathering data collected from across Wuhan’s wet markets through May 2017 and November 2019. This research, begun before Covid-19 focused a spotlight on these markets, was actually motivated by a study of tick-borne (no human-to-human transmission) Severe Fever with Thrombocytopenia Syndrome, which put our team in the right place at the right time to document the wild animals sold in these markets in the lead up to the pandemic. Our investigation, published today in Nature-Scientific Reports, found that both bats and pangolins had an alibi – neither was there! 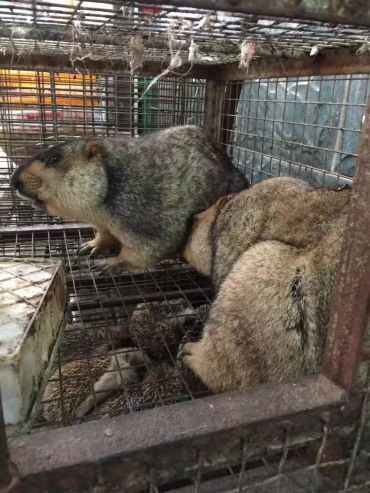 Caged marmots above a cage containing hedgehogs, Huanan seafood market prior to closure
Bats are actually rarely consumed in Central China, where market photos generally depict Indonesia. Pangolin trade is still a significant issue in other Chinese cities and trading nodes, but not in Wuhan. What were there, however, were 47,381 individuals from 38 species, including 31 protected species, all kept in dreadful conditions and teeming with all kinds of other infectious diseases, ready to be slaughtered on demand, if not sold as pets. While pork retails for the equivalent of c. $5.75 /kg in Wuhan, a marmot would cost $25. Slightly cheaper were badgers and raccoon dogs at $15-20, or a snack of hedgehog for $2-3. Amongst birds, peacocks were popular at $56, or if reptiles were the order of the day, sharp-nosed viper could be had for $70 /kg. Pets included everything from squirrels ($25) to myna birds ($300). Clearly then this is not subsistence bushmeat, but a costly delicacy.

With these huge concentrations of diverse species under one roof, while we discovered no evidence supporting original spill-over from candidate bats or pangolins in Wuhan, it would seem but a matter of time before some other unwelcome disease might skip into the human population. Indeed it is estimated that around 70% of all diseases afflicting people originate in animals, think Avian Influenza, HIV, Ebola, etc.

Commendably, with this risk in mind, on the 26th of Jan 2020, China’s Ministries temporarily banned all wildlife trade as a precautionary step until the COVID-19 pandemic concludes. Subsequently, on 24th Feb 2020, they permanently banned eating and trading terrestrial wild (non-livestock) animals for food. These interventions, intended to protect human health, redress previous trading and enforcement inconsistencies, will have collateral benefits for global biodiversity conservation and animal welfare, and will hopefully prevent some future tragedies.

Professor David Macdonald is Director of WildCRU, part of the Department of Zoology, University of Oxford