Scientists at the University of Oxford have discovered that classical nova explosions are accompanied by the ejection of jets of oppositely-directed hot gas and plasma, and that this persists for years following the nova eruption.  Previously, such jets had only been encountered emanating from very different systems such as black holes or newly collapsing stars.

A classical nova is the name given to an explosive event in our Galaxy.  It has been known for decades that when a nova erupts, its brightness can increase by several orders of magnitude and can transform an undetectable star into an object that can be seen by the naked eye.   This huge increase in brightness happens when matter is ripped away from one star onto the hard surface of a companion star, a compact object known as a white dwarf.   The matter accreted onto the white dwarf becomes extremely hot and dense, providing the right conditions to synthesize heavier elements, a process known as thermonuclear runaway.

It’s amazing that jets emerge from these remarkable objects, in spite of the turbulence of a nova detonation

The Global Jet Watch, led at the University of Oxford by Professor Katherine Blundell, comprising telescopes separated in longitude around the world to follow sub-day variability in the Galaxy made this discovery possible. The team published this finding in early 2021, reporting the initial discovery of jets in a classical nova that had erupted during the pandemic lockdown of 2020 and was subsequently followed intensively with time-lapse spectroscopy with the Global Jet Watch in the days, weeks and months that followed. 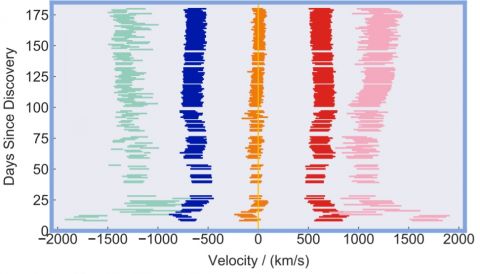 In a second paper published by the Royal Astronomical Society, the team has demonstrated that the exact same behaviour is exhibited by four out of four classical novae that the Global Jet Watch has been monitoring. This collection of four eruptions includes different types of classical novae (including one hybrid type) suggesting that jets are a likely outcome for the classical nova phenomenon in general.

Besides now being able to study the phenomena of jets, their launch, their propagation and their precession in a new way, the discovery is also a significant advance in understanding the influence of classical novae themselves on our Galaxy, the Milky Way. The fact that they can propagate hot gas far, far away from the site of the explosion itself has implications for the enrichment of the inter-stellar medium within our Galaxy with the new elements synthesised in the course of the explosion.  Further exploration and investigation of these implications is planned.

Dominic McLoughlin, the graduate student who had been investigating the time-series nova data, said; ‘The nova that erupted in July 2020 enabled us to crack the code. Discovering jets in the immediate aftermath of classical nova eruptions means we can now study them as they start launching and precessing – it’s not understood how jets actually get launched in general, despite the fact they happen all over space.’

Professor Katherine Blundell, who designed and instigated the Global Jet Watch, said: 'It’s amazing that jets emerge from these remarkable objects, in spite of the turbulence of a nova detonation – and it’s also amazing that the Global Jet Watch has persisted robustly throughout the turbulent times of lockdown. This opens up a whole new way to study the jet phenomena which is ubiquitous across the Universe.’

The Global Jet Watch was designed to accomplish two important goals. One of these goals was to be able to provide time-lapse spectroscopy of evolving and dynamic systems in our Galaxy, an important class of which are the so-called micro-quasars which can be regarded as scaled-down, speeded-up models of quasars in the distant Universe. These new results demonstrate its effectiveness in following different types of optical transients as well as its resilience at a time when in-person visits to the observatories are not possible.

Professor Katherine Blundell said: ‘This discovery did not come about because of detailed plans and presumptions about the way the Universe is, but instead as a fun, auxiliary project adjunct to the main research programmes of the Global Jet Watch. Being open to exploring the Universe in new ways invariably seems to produce new insights into its richness and inner workings.’

The second goal of the Global Jet Watch was to engage young people in developing countries, especially girls, into science and technology through the doorway of astronomy which is a gateway and exemplar of so many areas of high-level science and engineering. In non-lockdown times, the schools around the world that host the observatories are free to use the telescopes before local bedtime.

The Global Jet Watch uniquely combines excellence in science with empowerment for school students, around the world; astronomy is a gateway to science for so many

The experience of controlling the telescopes, operating the cameras and exploring and capturing the night sky has proved to be a pivotal experience for many. Already some of the first students to have used the telescope at their school have gone on to study science and/or engineering at colleges and universities in their countries.

Brian Schmidt, the Vice-Chancellor of the Australian National University and Nobel Prize winner in 2011, said: ‘This discovery will change the way we think about classical novae. The Global Jet Watch uniquely combines excellence in science with empowerment for school students, around the world; astronomy is a gateway to science for so many.’ 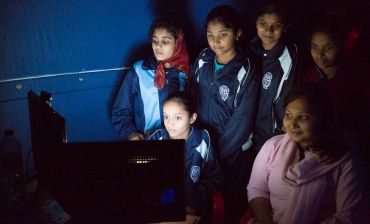 A group of students control the telescope
Steven Lee, the Instrument Scientist on the Global Jet Watch, who designed and built its spectrographs which were essential to making the high-fidelity detections of the phenomenon, said: ‘Although we didn’t expect this discovery, tracking these jets is in fact exactly what the Global Jet Watch was designed to do. The design of our instruments was entirely driven by the main science goals of the Global Jet Watch - and their capabilities mean they could take this discovery in their stride.’

For a short video about the Global Jet Watch, please see: https://www.globaljetwatch.net/news/what-is-the-global-jet-watch/

The wet market sources of Covid-19: bats and pangolins have an alibi
Call me Spock - the dedicated and disruptive Melinda Mills takes a (quick) break.