A new approach to improving hemispatial neglect after stroke

Jacinta O'Shea from the Nuffield Department of Clinical Neurosciences explains how stimulation of the brains of stroke patients can cause long-lasting improvements.

Every year thousands of people are left with debilitating symptoms after stroke. Perhaps one of the most striking is known as hemispatial neglect. This is when right-sided brain damage causes people to behave as though the left half of the world does not exist.

This problem arises when damage to the right parietal cortex disrupts the connections linking visual areas at the back of the brain with motor systems towards the front. The damage leaves the stroke survivor unable to voluntarily direct attention towards, and act on, visual objects in the space to their left.

Hemispatial neglect is very common, affecting many patients in the early months after stroke. Most recover over time, but about one-third do not, and suffer neglect as a lasting disabling condition.

To date there is no clinically established treatment, although researchers are developing promising methods to improve the condition. These methods focus either on changing patients’ brain activity or changing their behaviour.

One such approach is non-invasive brain stimulation. Damage to the right side of the brain causes the (undamaged) left side to become hyperactive. Suppressive stimulation of the (undamaged) left parietal cortex can reduce this hyperactivity. By ‘rebalancing’ brain activity in this way, neglect improves, but the effect lasts only for a few minutes.

Another approach is a behavioural therapy known as ‘prism adaptation’. Patients wear glasses containing prisms, which bend light, causing objects to appear to be shifted to the right. This results in a mismatch between where a patient sees an object and where they need to move their hand in order to touch that object. With training, patients learn to adapt to the prisms, by shifting their hand-eye coordination leftwards, towards the neglected half of space. This training improves many symptoms of neglect, such as postural imbalance and reading – but the benefit usually lasts only for 24 hours after training.

If either approach is repeated daily over several weeks the improvements can last for several weeks. However, this intensive repetition is time-consuming, labour-intensive, and costly.

Working with colleagues at the University of Lyon, France, we investigated whether it might be possible to use brain stimulation to improve how patients learn during prism adaptation, to make the therapy more efficient. In contrast to the traditional brain stimulation approach, which involves inhibiting brain activity in the left parietal cortex, instead we excited the left sensorimotor cortex, a brain region important for retaining newly learned motor skills. We reasoned that this might strengthen memory for prism adaptation training, which could cause longer-lasting improvements in neglect.

First, we tested this idea using tDCS (trans-cranial direct current stimulation), a mild form of non-invasive brain stimulation, in healthy volunteers during prism adaptation. We discovered that exciting the left sensorimotor cortex did indeed cause long-lasting memory of the adaptation task. Having established that this worked in healthy volunteers, we then carried out longitudinal case studies with three patients with hemispatial neglect. What we found surpassed our expectations.

In the early stage after stroke, these patients had shown improvements after prism therapy. But in the ‘chronic’ stage, over one year later, although the patients still adapted to prisms, this no longer caused any improvement. In different sessions in our study the patients performed prism therapy combined with real and fake tDCS. We then tested whether each patient’s neglect symptoms changed over time. We found that just one 20-minute session of real (but not fake) stimulation during prism therapy resulted in improvements in neglect that lasted for weeks to months and did not return to the baseline. 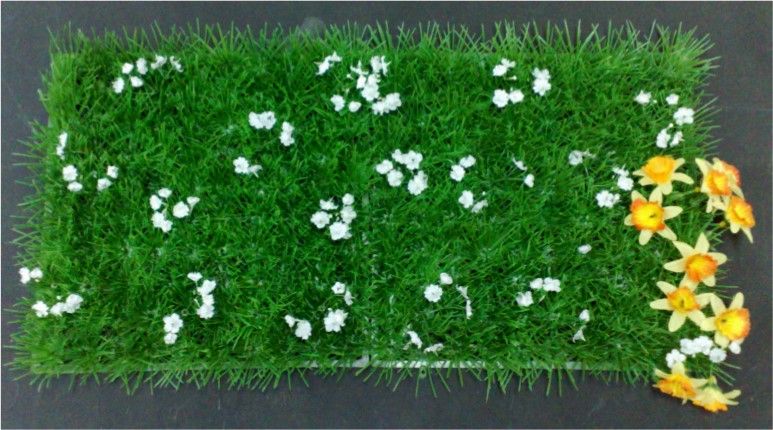 The patient was asked to distribute flowers equally around the garden. They are all clumped to the right, showing dramatic neglect of left space.

Our prediction that stimulation would strengthen the memory trace formed during adaptation, and cause neglect improvements to last for a long time, was proved correct. The duration of the improvement was surprising; moreover, it appeared to be cumulative, with each combined stimulation/therapy session building on the last.

For these long-term ‘treatment-resistant’ stroke patients involved in the study, this was proof that they still have the capacity to make cognitive gains. We have established, for the first time, that it is possible to ‘switch back on’ or ‘reawaken’ plasticity in dormant brain circuits of patients suffering chronic neglect, more than one year after stroke, with the therapy gains lasting much longer than expected.

We’re now testing this in a larger group of patients in a randomised controlled clinical trial using a more intensive training regime. If the findings replicate, our approach will be a nice example of how we can take ideas from the neuroscience laboratory into the clinic to help improve stroke patients’ lives.

This research was funded by a Royal Society Dorothy Hodgkin Fellowship to Jacinta O'Shea, with support from the Oxford Biomedical Research Centre.

Just what is our problem with numbers?
What are quantum rainbows?