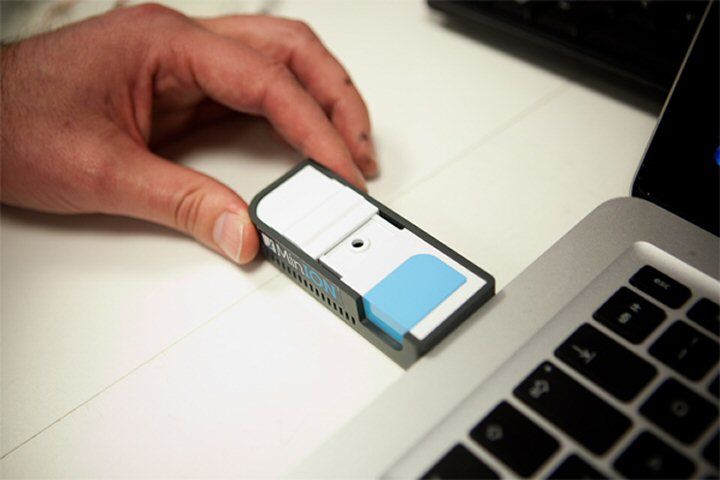 Last month Oxford University spinout firm Oxford Nanopore revealed that it is to produce a new DNA sequencing machine the size of a USB stick.

The announcement caught many by surprise, with the prospect of shrinking today’s bulky DNA sequencers into tiny devices that could decode the building blocks of life in hours (even seconds) instead of days, being widely reported in the media.

After articles in The Guardian, New York Times, Financial Times, and elsewhere, the blogosphere was abuzz with the exciting possibilities such machines open up.

Yet perhaps it shouldn’t have come as such a surprise: the firm’s success is built on nearly a decade of basic research at Oxford University’s Department of Chemistry.

Professor Hagan Bayley moved to Oxford in October 2003 having already done considerable research into how tiny pores in a protein might be used to detect the molecules passing through them, work he continued to develop in his Oxford lab.

In 2005, with the backing of IP Group and the help of Oxford University Innovation, Hagan founded Oxford Nanopore to commercialise his ideas.

‘We were looking at sensing a wide range of molecules, but it was work we did at Oxford which showed, for the first time, that our nanopores could identify all four bases of DNA,’ Hagan explains.

‘After that it made sense to shift the firm’s development into the area of DNA sequencing, a move which provided an impetus for many others to follow.’

Conventional sequencing requires DNA samples to be amplified (which can introduce errors), cut to the right length, attached to a bead or surface and given a fluorescent tag which has to be read with expensive imaging equipment.

The pioneering approach developed by Hagan and his team was to eliminate tags and enable individual DNA bases to be snipped off a strand one by one and then fired through a nanopore. Each base disrupts an electric current passed across the nanopore by a different amount so the DNA base ‘letter’ (A, C, G or T) can be read.

‘We found a modified pore that could clearly distinguish between the different bases,’ Hagan tells me, ‘but the big prize was strand sequencing – being able to pull a whole strand of DNA through a pore and read out the bases one at a time from that. It was work done at Oxford that first showed that this was possible.’

The University contributed in other ways too: its Begbroke Science Park would provide a home for Oxford Nanopore from July 2006-2009, during that time the workforce rocketed from 6 to 70 staff.

Despite his role as the firm’s founder, a board member, and long-time scientific adviser, Hagan didn’t become its CEO; ‘my interest was always in the basic research’ he says.

Instead, he continued to work with his team on the scientific challenges of understanding nanopores and what they can do, publishing papers that were useful to both the spinout and others interested in the potential of this emerging technology.

Yet the relationship remained a close one: former members of Hagan’s group would go on to play a significant role in the firm’s development as it grew from a small start-up to a company now employing 120 people.

Drawing on the basic research, Oxford Nanopore has been working hard for the last few years on creating the electronic hardware and software necessary to turn the nanopore concept into viable commercial devices. Its new MinION and GridION sequencers have already been hailed as ‘game-changing’ products on the road to cheaper, faster, more flexible DNA sequencing but this could be just the start, Hagan suggests: ‘we could see a high-throughput chip reading signals from hundreds of thousands of nanopores simultaneously, this could be very important for large-scale sequencing.’

After a decade of working in this area Hagan believes it is now time for him to move on and find new avenues of research.

He believes that most new commercial exploitation opportunities come from basic research, and instead of research councils and universities trying to plan ‘pathways’ to new products and services: ‘the best way to do initial research is to find good motivated scientists, give them funding and time, and leave them alone.’

Hagan tells me: ‘we need to make it simple for academics to form a company, don’t make them have to take a year out from their academic work or quit their university job to get things going.’ The support he received from Isis Innovation and others around the University indeed made spinning out a firm ‘relatively easy’.

His message to funders and universities is that it’s how you treat your researchers that counts; support them and, in time, everyone will reap the rewards.