Making a career change later in life isn’t easy, but it is worth it | University of Oxford
Skip to main content

‘I’m passionate about what I do’ is arguably one of the most hollow, overused expressions in the CV writing handbook. For an increasing amount of people who clock-watch their way through a 9-5 existence, rarely getting the results or satisfaction that they are hoping for, having a passion for your work is more of a pipe dream than a tangible reality. Particularly for those further along the career path, who often convince themselves that they are either too old to succeed or that it is too late to try.

For the first 15 years of her professional life, Carlyn Samuel was one of these people. Having built a successful PR career,  it was only when she put the brakes on and took some time for herself, that, at the age of 38, she made the decision to take a Master’s degree in Conservation Science and start over. Eight years later, she has never looked back and is now a research coordinator at Oxford’s Interdisciplinary Centre for Conservation Science (ICCS). She talks to ScienceBlog about why making a major career transition later in life was the best decision she ever made, and how she has used her communications expertise to make research more accessible to the wider public through Soapbox Science.

What triggered your decision to change career?
I spent 15 years of my working life in PR for the printing industry – not exactly the most eco-friendly world. The lack of fulfilment bothered me, but never enough to actually do anything about it. A three month sabbatical exploring the Amazon Rainforest turned out to be life-changing. Few people know this, but substantive parts of the Amazon are owned by the fuel industry. In one area I visited it shocked me to see the region divided up into plots. Instead of town names each bore the name of a multinational oil company. But I came across one community that was completely independent. Despite extreme pressure they had refused to sell out to big business, and they had started an eco-lodge. It struck me that if they could stand up and save their little piece of the jungle, I could do my part to protect our wonderful planet.

So, at 38 I decided to go for it, and applied for a master’s degree in Conservation Science at Imperial College London, which is where I met EJ Miller-Gulland, (Tasso Laventis Professor of Biodiversity in Oxford’s Department of Zoology.) She offered me a job after I graduated and I have been working for her ever since.

What does your role in the ICCS group involve?
I’m lucky that I get to work on a number of different projects in one job. From trying to change the discourse in conservation through our Conservation Optimism movement, to protecting endangered antelopes with the Saiga Conservation Alliance. This involves travelling to central Asia a lot and working with rural, low income communities. Most have challenging lifestyles, with temperatures ranging from 40 degrees celsius in the summer to -30  in the winters, often with no running water and limited electricity. It reminds me to count my blessings and appreciate how lucky I am to live where I live, and be able to help people and biodiversity in some small way.

What do you enjoy most about conservation research?
I love the multi-dimensional nature of our work. Conservation isn’t just about saving specific species, it is about understanding the whole eco-system, the importance it has to local communities on many different levels - be it cultural, spiritual or economic - and the demands being placed on it by different stakeholders. Then understanding how to best work with people most affected by any conservation decision, as well as other groups and experts to safeguard both that biodiversity and people’s wellbeing. 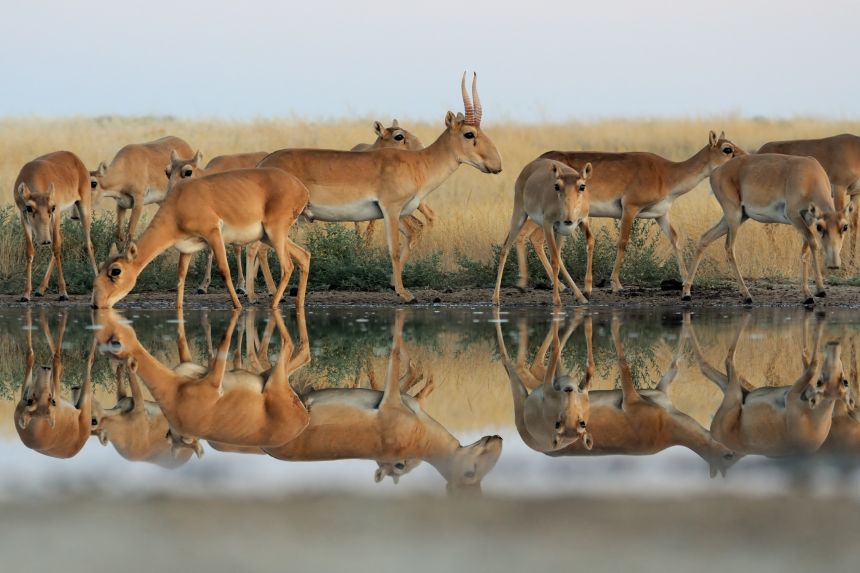 The ICCS runs a number of projects including the Saiga Conservation Alliance, protecting the endangered antelopes of Central Asia and the former Soviet Union. Image credit: Shutterstock

How do you go about this?

A successful project often considers the big picture, so is tackled by an interdisciplinary team.

One ICCS project involves tackling the illegal wildlife trade, bringing together inspirational colleagues across the University that you wouldn’t normally interact with. For example, we are working with the Oxford Internet Institute to understand the trade’s digital footprint and the role of the dark web. To address the problem we’re utilising theory and methods from public health, economics, psychology, ecology and sociology. I never would have imagined that a career in conservation would involve so many different skill sets.

Have there been any stand-out highlights for you so far?
The Conservation Optimism movement is brilliant. Thanks to things like Blue Planet, ocean conservation is an issue that seems to have finally captured public attention. The summit I helped to arrange last year brought people of different ages and backgrounds together, from all around the world.

Young people are so internet savvy and enthusiastic, it was really inspiring to sit and listen to what they are doing to conserve nature. They are able to tap into so many new funding streams because people want to support local, youth-driven programmes. We had conservationists with over 40 years’ experience eagerly engaging with the next generation of conservationists, wanting to learn from them and vice versa. It was great see that knowledge exchange in action. When we set up the initiative we wanted to create a hub for people to share ideas and connect with each other, which is really taking off. And now there are smaller Conservation Optimism events springing up across the world as a result.

What are the biggest challenges in your work?
It can be hard to get funding for conservation if the project doesn’t involve charismatic megafauna in Africa – and particularly if you work in ex-Soviet countries, as we do. For us, £5k is a tonne of money that we can do so much with. We can run a saiga awareness programme across multiple schools, in several countries! Or fund a womens’ embroidery initiative in Uzbekistan to empower women.

Publicity definitely helps though - recent coverage around saiga deaths has triggered a peak in interest in conservation-related issues. We are getting there, we just have to sustain that momentum.

What has your experience been as a women starting a career in science later in life?
Coming in at Master’s degree level there were more women on my course than men, which was a welcome surprise, and we’ve continued to support each other’s careers ever since. I have been fortunate to have strong female role models and mentors like EJ, so have never felt unsupported. For me the challenge was learning how to study after all this time, and learning my way around a new field.

For various reasons it is difficult to get women to consider taking-up scientific careers. I looked into this a little more and discovered that at school, girls are more likely to rate science as their favourite subject, and out-perform boys at GCSE, A-level and degree-level. Even so, STEMM subjects have been found to account for only 35% of the HE qualifications achieved by women. Notably, women account for only 15% of UK science professors and are woefully underrepresented when it comes to key positions within STEMM-based careers in the UK.

I think there is a constant bias, particularly for women who return to work after having children. Unconscious questions like ‘is she still going to be as focused on her work?’ Men who become fathers are rarely judged in this way.

The way the media biases perceptions does nothing to help change the dialogue. Headlines about ‘female pilots/doctors/scientists’ drive me mad. She’s not a female pilot, she’s a pilot. 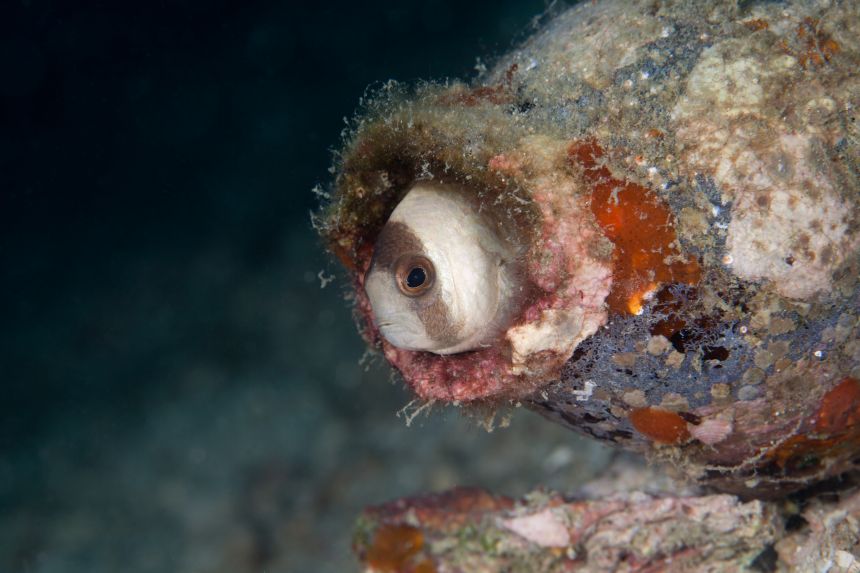 Carlyn also works on Conservation Optimism, the global initiative dedicated to sharing optimistic stories about conservation and inspiring people all over the world to do their part to protect the planet. Image credit: Shutterstock

How did you come to be involved in Soapbox Science?
I stumbled across it in London and just thought it was such a great way of getting science out there and showing people that women in science are not freaks – they’re real people who can be very approachable.

It works on different levels, first to get young women more engaged in science, and secondly, to challenge our academics to communicate their research in a more accessible way, it also does a great job of boosting their profiles and careers.

Young girls who might be passing and have never thought of science as an option for them get to see how fun it can be - it’s not just about the highbrow science. We have had a few situations where children have approached the speakers afterwards to thank them for being so brave and inspiring. If you just inspire one person, that’s all it takes.

What do you like most about the initiative?
There are so many incredible women here but trying to get them not only to talk about their work, but to a general audience, can be a challenge. They are so nervous, but once they get up on the soapbox they are running on adrenalin. It isn’t just good for their science but for their CV and their confidence. It can lead to jobs in science communications and increased research funding. I love seeing them excel.
What do you think can be done to encourage more young people to get into science?

It’s often said that if you are bad at maths or science you can’t work in a science-led field, but I don’t agree. You can still offer a lot, but there needs to be a route in for these people too. We need to teach young women that you don’t necessarily have to be a scientist to work in ‘traditional’ scientific environments. I recently spoke with a fantastic drone pilot working on a rigorously scientific ocean conservation project. She isn’t a scientist but the project would have been impossible without her.

What are you looking forward to this year?
I run our biodiversity fellowship programme, which is a great two-way learning experience. It allows three people a year to come and work with ICCS for a term, fully funded. When the programme first launched we had about 50 applicants but now it is so popular, that we have over 300.

We recently had a vet with us from Uganda who works on gorilla conservation. She noticed that local people, with limited access to basic health and other social services were passing diseases to the gorillas, so she developed a public health programme. Integrating human, animal and ecosystem health together is a new field in conservation and gaining traction. Coming into the office is like getting my batteries recharged with inspiration.

Could aspirin be used to treat tuberculous meningitis?
The other side of the Big Bang