Clocks are essential building blocks of modern technology, from computers to GPS receivers. They are also essentially engines, irreversibly consuming resources in order to generate accurate ticks. But what resources have to be expended to achieve a desired accuracy? In our latest study, published in Physical Review X, we answer this question by measuring, for the first time, the entropy generated by a minimal clock.

Humans have mastered the art of timekeeping to an accuracy of approximately one second in every one hundred million years. However, the thermodynamic cost of timekeeping, i.e. its entropy production, has up to this point been unexplored. 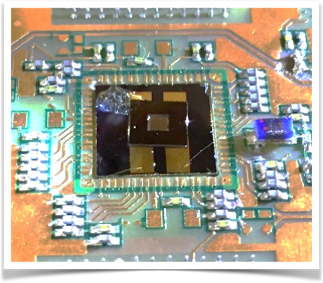 Our experiment reveals that the hotter the clock, the more accurate the timekeeping, a prediction only expected to hold for quantum systems. Understanding the thermodynamic cost involved in timekeeping is a central step along the way in the development of future technologies, and understanding and testing thermodynamics as systems approach the quantum realm.

In a collaboration with Prof Marcus Huber at Atominstitut, TUWien, Dr Paul Erker and Dr Yelena Guryanova at the Institute for Quantum Optics and Quantum Information (IQOQI), and Dr Edward Laird at University of Lancaster, my colleagues, Dr Anna Pearson and Prof Andrew Briggs, and I designed a classical clock, with tuneable precision, to measure entropy production.

Our clock consists of a vibrating membrane integrated into an electronic circuit: each oscillation of the membrane provides one tick. The resources that drive the clock are the heat supplied to the membrane and the electrical work used to measure it. In operation, the clock converts these resources to waste heat, thus generating entropy. By measuring this entropy, we can therefore deduce the amount of resources consumed.

For the first time, we’ve shown a relation between the accuracy of a clock and its entropy production

By raising the energy, or “heat,” in the input signal, we were able to increase the amplitude of vibrations and in turn improve the precision of the membrane measurements. Our team found that the entropy cost - estimated by measuring the heat lost in the probe circuit - increased linearly with the precision, in agreement with quantum clock behaviour.

Our experiment reveals the thermodynamic costs of timekeeping. There is a relation between the accuracy of a clock and its entropy production; there is no such thing as a free minute - at least if you want to measure it.

For the first time, we’ve shown a relation between the accuracy of a clock and its entropy production, which although derived for open quantum systems, holds true in our nanoelectromechanical system.

Our results support the idea that entropy is not just a signature of the arrow of time... but a fundamental limit on clock's performance.

Our results support the idea that entropy is not just a signature of the arrow of time, or a prerequisite for measuring time’s passage, but a fundamental limit on clock's performance.

The relation between accuracy and entropy might be used to further our understanding of the nature of time, and related limitations in nanoscale engine efficiency.

Our device could allow us to investigate the particular trade-off predicted between clock accuracy, which as we showed is linked to available thermodynamic resources, and tick rate. This trade-off means that, for a given resource, a clock can have low accuracy and high tick rate or high accuracy but low tick rates.

Dr Natalia Ares is based at the Department of Materials.

Geoscientists Call for Action on Tackling Racial Inequity
From a forest track to the corridors of power: the wild lives of Nathalie Seddon