Saiga in the wild

By Hunter Doughty and Joss Wright

Targeted advertising and news coverage are powerful, and controversial, tools for influencing human perceptions and behaviour. This influence can be perceived as exploitative – notoriously Cambridge Analytica’s alleged influence in the Brexit referendum and the 2016 US Presidential election. Such cases have received widespread attention and raised ethical questions around whether, or how, these tools should be used. But do they, unwittingly, reveal new conservation solutions?

As researchers working to improve conservation of the world’s wildlife, we wondered: could we, and should we, subvert these tools’ main use of peddling products and political ideals, to instead promote positive conservation messages? 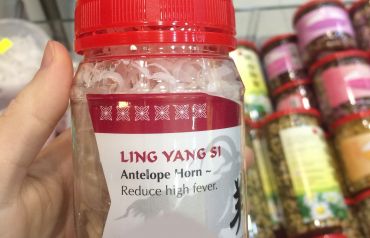 Saiga horn packaged as medicinal remedy in traditional Chinese medicine
The illegal or unsustainable wildlife trade is a major issue impacting biodiversity across the globe. However, despite numerous concerted efforts to tackle this challenge, it remains a key contributor to global species decline. In response, we set out to develop an effective, scalable approach to curb demand for unsustainably harvested wildlife, and to test this approach in practice.

One species under significant trade impact is the saiga antelope - a Critically Endangered animal from Central Asia, whose horn is used in traditional Chinese medicine (TCM) and often marketed as líng yáng, 羚羊. Singapore is a top saiga horn consumer country, so we implemented a behaviour change intervention to attempt to shift Singaporean saiga horn consumers towards more sustainable TCM treatments such as chrysanthemum tea. Based on findings from our initial research, we decided to test whether strategic advertising of news media would be an effective way to engender desirable responses among a target audience of middle-aged women (who were selected because they are most likely to purchase saiga horn for both themselves and their families).

Algorithms have identified that the more individuals see something, the more attractive or trustworthy it appears

It is well evidenced that repeated exposure to an idea increases the chance that an individual will ‘adopt’ that idea. This is why advertisers show adverts over and over, and why YouTube repeatedly serves up the same suggested videos. The algorithms have identified that the more individuals see something, the more attractive or trustworthy it appears. Similarly, the more that we hear an idea directly from other people, the more it is ‘socially reinforced’ as being good or accurate.

Targeted online advertising, built on profiling individuals’ online activity, underpins the business model of most large online services, and has proven highly effective at directing an audience’s attention in a way that maximises profits for both advertisers and platform operators. Targeted advertising makes use of demographic data, online activity, social networks, and a myriad of other data points to present adverts to the ideal consumer and, crucially, provides a wealth of information back to the advertiser concerning which groups saw adverts, how well they were received, and how widely the message spread.

Would it be possible to use this understanding of human behaviours and these tactics for social good?

The source of the advertisement, however, also matters. Sources that are perceived as trustworthy to an audience give greater weight to the content. News coverage in particular, whether offline or online, can often fill the role of a trustworthy source. On their own, news stories can certainly have influence over us, as shown through research around voting and health behaviours; but brought together, repeated exposure to news content via targeted advertising forms a powerful one-two punch of behavioural influence.

We employed targeted online advertisements through Facebook, Google, and Outbrain to promote news articles discussing the origin of saiga horn products as being from an endangered species

Would it be possible to use this understanding of human behaviours and these tactics for social good? To test this approach in the fight to save the saiga we employed targeted online advertisements through Facebook, Google, and Outbrain to promote news articles discussing the origin of saiga horn products as being from an endangered species. Advertising performance and in‐depth Facebook analyses let us assess audience response both at scale and in detail. Our message spread extensively through Singapore’s media, with our adverts being shown almost five million times, and with the story running on at least seven news outlets, including some of the largest and most trusted outlets in Singapore.

There were widespread desirable audience responses

Our analysis found that there were widespread desirable audience responses, exemplified by 63% of Facebook users' engagements showing identifiably positive features, such as calls for public action to reduce saiga horn consumption, anger at having unknowingly used an endangered species, and self‐pledges to cease using saiga horn products. By contrast, only 13% of engagements showed identifiably negative features. Following the results of the online intervention, we are now carrying out an on-the-ground evaluation to assess how this observed online response translates into real-world behaviour change.

Our research demonstrates that the use of targeted advertising to promote conservation messages through news media has promise. The capabilities of online advertising to directly target consumers of unsustainable products, and the information subsequently available to researchers to analyse advert performance, makes their use particularly effective. Merging these techniques with news content for social good can greatly augment the reach and influence of these positive messages.

Hunter Doughty is a Doctoral Researcher based at the Department of Zoology and Joss Wright is a Senior Research Fellow based at the Oxford Internet Institute. This research­­­­­­­ is part of the Oxford Martin School Programme on Illegal Wildlife Trade.