Merritt Moore has managed to combine her passions for dance and science.

It sounds like – and is – a light-hearted way for DPhil students to share their research with the world. But for Merritt Moore, the international Dance Your PhD contest offered the opportunity to combine two passions and prove that the arts and sciences are not mutually exclusive.

Merritt, a professional ballet dancer who is carrying out a DPhil in atomic and laser physics at Oxford University, won the physics category of the competition, organised each year by the American Association for the Advancement of Science.

Merritt said: 'When I first found out I'd won, I was excited – this contest is meant as a light-hearted way to let people share their PhDs, but for me it also highlights an issue that I've been pushing against for most of my life.

'I've constantly been told that I can’t pursue my two passions at the same time, but I've worked hard to prove that wrong by continuing both physics and dance. I've danced professionally with Zurich Ballet, Boston Ballet and English National Ballet while graduating in physics at Harvard and pursuing a PhD in atomic and laser physics at Oxford.

'This contest gave me the chance to overlap the two in a way that I rarely get to do, so winning the physics category is just a bonus!'

Merritt's DPhil research involves creating pairs of photons to be used for quantum information experiments. A photon is a particle of light, and by creating controlled pairs of them, scientists can explore exotic and fascinating properties of quantum mechanics, such as entanglement.

Describing her award-winning dance, titled 'EnTANGOed', Merritt said: 'In order to describe how we create pairs of photons through the dance, a powerful laser (represented by the pianist’s hands driving the music) is guided into a non-linear crystal (the laboratory). When the laser interacts with the crystal, pairs of photons (the dancers) are generated – a process known as spontaneous parametric down-conversion.

'The generated photons have half the energy of a laser photon to satisfy energy conservation (hence the lower "red frequency" dress and tie). Even when a photon pair leaves the crystal (the lab), they continue down the same path. It is only when they are separated by a polarizing beam-splitter that the two photons are forced in different directions, because of their different polarizations.

'These photons are generated spontaneously and would otherwise be impossible to measure without destroying them, therefore they are intentionally separated so that one can be detected to herald the existence of the other. We can use the remaining photon as a carrier of quantum information for our various applications.' 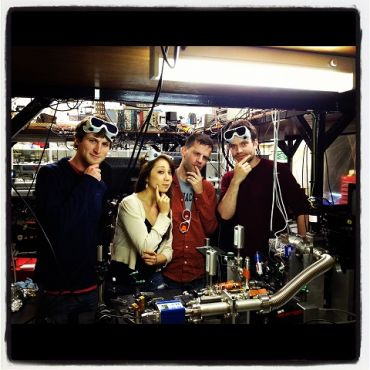 Merritt Moore and some of her colleagues in the lab.
Fighting HIV on World AIDS Day
A breath of fresh air – Shedding light on oxygen, radiation and cancer treatment