By David Macdonald, Director of WildCRU

Tigers are in dire straits, with prospects for the Indochinese subspecies among the most dire of all. This is why I want to spotlight the work of Eric Ash for leading research on one of the few known breeding sites for the subspecies anywhere in the world.

Eric Ash, a doctoral student at Wildlife Conservation Research Unit (WildCRU), part of the University of Oxford’s Department of Zoology, has dedicated himself to the conservation of tigers in Thailand for the last nine years. Now, with our collaborators at the Freeland Foundation, he has led our new paper published in the journal, Land.

The under-studied and endangered Indochinese tiger faces extinction and continuing declines, a distinction that unhappily makes the subspecies a candidate for Critically Endangered status

The under-studied and endangered Indochinese tiger (Panthera tigris corbetti) faces extinction and continuing declines, a distinction that unhappily makes the subspecies a candidate for Critically Endangered status. Thailand plays a crucial role in its conservation – there are few known breeding populations in other range countries. Our work has focused on Thailand’s Dong Phayayen-Khao Yai forest complex (DPKY), a group of five protected areas and UNESCO World Heritage Site, where Eric and Freeland Foundation, in partnership with the Thai-government and Panthera, conducted a massive camera-trapping study to find out just how the tigers there were faring. 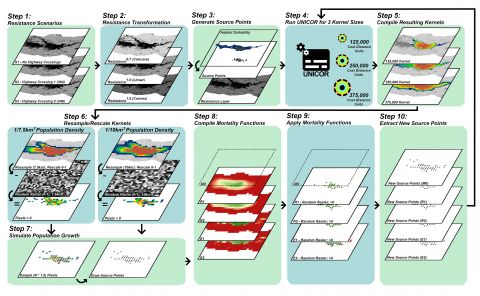 Importantly, we evaluate the sensitivity of population connectivity models to the variation and interaction of key factors, such as landscape resistance to movement, dispersal ability, population density, and mortality, over a series of timesteps. The article, led by researchers at WildCRU, offers insight into potential tiger range expansion scenarios.

The authors utilize spatially and temporally-dynamic simulations to model tiger population changes and dispersal from this landscape to potential habitat elsewhere in Thailand, Cambodia, and Laos, areas where tigers are thought to be extinct.Our new paper builds upon the remarkable news that this vital population of tigers could be recovering, as evidenced by signs that tigers are beginning to disperse from core areas into frontier habitat from which they had previously been extirpated

Our new paper builds upon the remarkable news that this vital population of tigers could be recovering, as evidenced by signs that tigers are beginning to disperse from core areas into frontier habitat from which they had previously been extirpated.

This was a huge analytical effort, informed by an even greater effort under arduous conditions in the field which generated over a million camera-trapping images and almost 80,000 collective trap nights over nine years. The team ran advanced analyses, requiring months of high-level computing, which produced 24,300 simulations of population, landscape connectivity, and density of dispersing individuals across the landscape to evaluate the effect of key factors.

The result? The computer models suggest that the tiger’s fate is extremely sensitive to variations in mortality and dispersal ability – and, over time, these two factors interact to strongly affect predictions. For the technical aficionado: incorporation of an explicit mortality component, reflecting differences in probability of survival across the landscape, combined with increased dispersal ability, resulted in considerably lower estimates of population and connectivity.

These results are hugely important for tigers, but they also offer an important lesson more broadly: given the importance of population connectivity modelling in cutting-edge ecological research, the approach of the WildCRU team can inform future assessments for rare or threatened species where empirical data are scarce – a challenge faced by many researchers around the world.

This study is among the first explicitly to evaluate the interaction of dispersal ability and mortality on population size, distribution and connectivity in a spatially and temporally explicit dynamic framework. The authors are convinced that future studies should adopt this approach, explicitly accounting for mortality risk across landscapes and potential interactions with dispersal ability over time. The ways in which these factors can vary over time in reality can drastically affect the simulated results. Importantly, for translating this research into impact, the study identified potential population growth and range expansion scenarios for tigers along with key factors relevant to their long-term management across this key landscape in Southeast Asia.