Credit: Shutterstock. Young people leaving care can have good outcomes. A quarter of care leavers in our surveys had very high well-being and many have gone to university. But Local Authorities’ procedures are critical

Many local authorities can and should be doing more to help the young people they have looked after. Large numbers of care leavers (aged 18-25) report anxiety, loneliness, and lack of support, according to a long-term research project funded by the Hadley Trust and led by Oxford Professor of Education and Adoption, Julie Selwyn CBE, and Linda Briheim-Crookhall ( Coram Voice).

Among a host of appalling statistics, the most shocking finding in the recently published research on care leavers, is that the lives and futures of care leavers is genuinely determined by that over-used expression, a postcode lottery - see illustration 'percentage of care leavers with low well-being', below.

The lives and futures of care leavers is genuinely determined by that over-used expression, a postcode lottery

While care leavers in some areas report a positive experience and go to university alongside their peers, life for young people in other areas is horrifyingly different.

The report shows these Local Authorities are providing insufficient support with some young people feeling abandoned. Concerning, was the percentage (24%) of care leavers who recorded they had a disability or limiting long-term health problem: twice as many as their peers in the general population. This group of care leavers frequently reported feeling isolated and not having even one good friend. Many had high stress scores and 35% felt lonely always or often - see illustration immediately below for report findings. 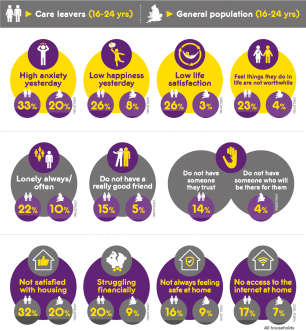 A report on 11 Nov from the Children’s Commissioner, showing that young people in care are routinely being failed, accorded with the findings from the care leavers’ report.

Professor Selwyn says, ‘The variation in Local Authority can be stark. Nearly 80% of care leavers living in the best performing Local Authority area report that they feel safe but, in the lowest performing area, about half tell us they feel unsafe. They may be living in hostels, with  adults who have problems of addiction and who are much older than them or living in a flat on their own.

‘But some young people feel that being in care has been a very positive experience. A quarter of care leavers in our surveys had very high well-being and many have gone to university. Some care leavers are here, at Oxford in our undergraduate, Masters and Doctoral programmes.’

The report states, ‘There was an association between very high well-being and care leavers feeling that they had been treated the same or better than other young people. This suggests that services that actively seek to compensate for the additional challenges that their care leavers face are likely to help make their lives better.’

All this goes to show that young people leaving care can have good outcomes, but Professor Selwyn maintains the Local Authorities’ procedures are critical in making the difference.

Care leavers benefit from the Local Authorities’ policies in terms of housing and financial advice and support. Leaving care workers play an important and unsung role in helping young people transition to independent life. Care leavers also need to understand their histories but, surprisingly, 23% still did not have a full understanding of why they had been in care.

According to the report, ‘When the state steps in to look after a child, it is down to the state as their corporate parent, to step up to support care leavers to reach their full potential. Local authorities should want their children to do (at least) as well as other young people. When we compare how care leavers feel they are doing to other young adults, the difference is stark.’

Young people leaving care can have good outcomes, but Local Authorities’ procedures are critical in making the difference

But the report insists, ‘Corporate parents should not accept that their care leavers do worse than other young people.’

And it recommends, ‘Address the continued postcode lottery by each local authority systematically measuring care leavers’ subjective well-being and identifying where their care leavers struggle and where they do better.  Share the practices that promote positive experiences.’

Dr Selwyn’s report is based on 1,800 surveys of care leavers. Every Local Authority which takes part does so voluntarily and 50 out of 152 nationally have participated since 2017.