Diana Prado Lopes Aude Craik, a DPhil student working in the Ion Trap Quantum Computing Group in the Department of Physics, is the overall winner of this year's contest for her picture 'Microwave ion-trap chip for quantum computation'.

And Dr Dario Carugo, currently a visiting researcher at the Institute for Biomedical Engineering (IBME) in the Department of Engineering Science, was awarded second place in the innovation section of the competition for his image of fluid streams from an oscillating microbubble.

Diana, whose supervisors are Professor Andrew Steane and Professor David Lucas, and who worked on the project featured in the image with Norbert Linke, said: 'We work on designing, fabricating and testing prototype building blocks of an ion-trap quantum computer. Such a quantum computer would store information in single ions (charged atoms), which are used as "quantum bits" (qubits).

'We are very happy that the EPSRC photo competition has given us the opportunity to share our excitement about our work with a wide audience of science enthusiasts.'

Diana's picture caption states: 'When electric potentials are applied to this chip’s gold electrodes, single atomic ions can be trapped 100 microns above its surface. These ions are used as quantum bits ("qubits"), units which store and process information in a quantum computer. Two energy states of the ions act as the "0" and "1" states of these qubits. Slotted electrodes on the chip deliver microwave radiation to the ions, allowing us to manipulate the stored quantum information by exciting transitions between the 0 and 1 energy states. This device was micro-fabricated using photolithography, a technique similar to photographic film development. Gold wire-bonds connect the electrodes to pads around the device through which signals can be applied. This image is taken through a microscope in one of Oxford University's physics cleanrooms. The wire-bonding needle can be seen in the top-left corner. The Oxford team recently achieved the world’s highest-performing qubits and quantum logic operations.' 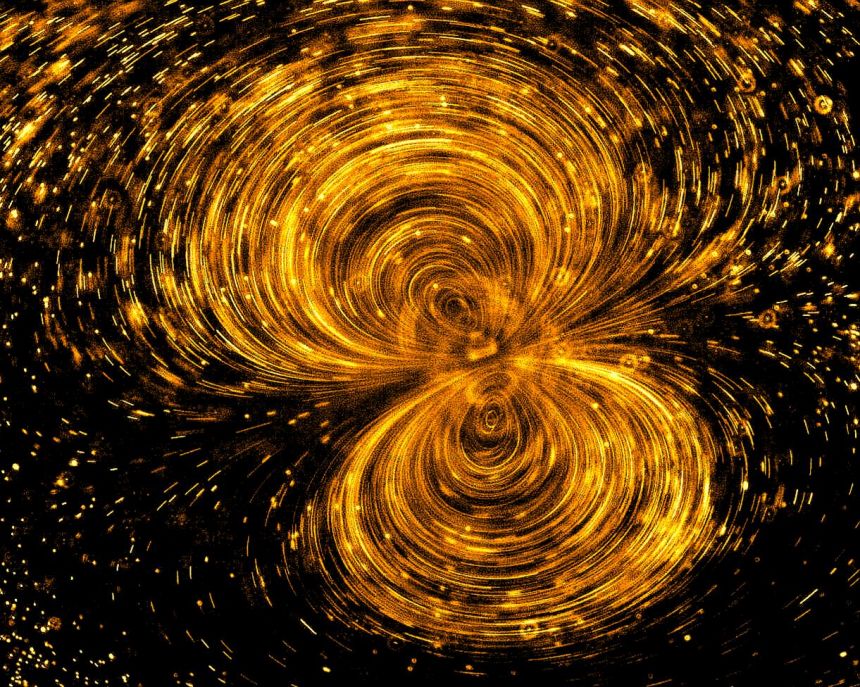 'Fluid streams from an oscillating microbubble'

Dario's image was taken while completing his post-doc at IBME under Professor Eleanor Stride. His caption stated: 'The photograph shows fluid streamlines generated by a gas microbubble exposed to an ultrasound wave. Microbubbles are only few micrometres big, on the same scale as bacteria or the diameter of a human hair. They comprise of a gas core enclosed by a thin shell, and are frequently used in the clinic as contrast agents for echocardiography. In the presence of ultrasound, they oscillate by cyclically expanding and contracting. This causes the displacement of the surrounding fluid and the generation of a fluid flow, which takes the form of counter-rotating vortices. In this photograph, fluorescent microparticles are added to the fluid in order to visualise the flow streamlines using a microscope. Image contrast enhancement and colouring was performed using ImageJ. Importantly, the observed fluid flow could be exploited in therapeutic applications as a means of effectively transporting drugs towards desired locations within the body (ie cancer tissues).'

One of the judges was Professor Robert Winston, who said: 'It is crucial to promote greater understanding of science and engineering research, and the role it plays in making new discoveries, developing new technologies and in making the world a better place for us all. These are truly inspirational images and tell great stories. It was a real pleasure to take part as a judge and I hope people will want to find out more.'

Professor Philip Nelson, EPSRC's chief executive, said: 'Yet again, the standard of entries into this year's competition shows the inquisitive, artistic and perceptive nature of the people EPSRC supports. I'd like to thank everyone who entered; you made judging a very hard but enjoyable task.

'This competition helps us engage with academics and these stunning images are a great way to connect the general public with research they fund, and inspire everyone to take an interest in science and engineering.'

The competition received over 200 entries which were drawn from researchers in receipt of EPSRC funding.

Revealing the brain's breathing secrets
The bitter fruits of alienation: Belgium’s struggle is the problem of our age