Disruptive bioengineering – changing the way cells interact with each other

Researchers at the MRC Weatherall Institute of Molecular Medicine have developed a new platform based on the revolutionary CRISPR/Cas9 technology, to alter the way human cells respond to external signals, and provide new opportunities for stopping cancer cells from developing.

Cells are constantly monitoring the environment around them and are programmed to respond to molecular cues in their surroundings in distinct ways – some cues may prompt cells to grow, some lead to cell movement and others initiate cell death. For a cell to remain healthy, these responses must be finely balanced. It took evolution over two billion years to tune these responses and orchestrate their interplay in each and every human cell. But what if we could alter the way our cells respond to certain aspects of their environment? Or make them react to signals that wouldn’t normally provoke a reaction? New research published by scientists at the University of Oxford takes cellular engineering to the next level in order to achieve just that.

In a paper published in Cell Reports, graduate student Toni Baeumler and Associate Professor Tudor Fulga, from the MRC Weatherall Institute of Molecular Medicine, Radcliffe Department of Medicine, have used a derivative of the CRISPR/Cas9 technology to rewire the way cells respond to extracellular signals. CRISPR/Cas9 frequently makes the headlines as it allows medical researchers to accurately manipulate the human genome – opening up new possibilities for treating diseases. These studies often focus on correcting faulty genes in crops, livestock, mammalian embryos or cells in a dish. However, not all diseases are caused by a defined error in the DNA. In more complex disorders like diabetes and cancer, it may be necessary to completely rewire the way in which cells work.

Cells are exposed to thousands of different signals – some they will have encountered before, while others that are entirely new. Receptors that sense these signals form one part of a complex modular architecture created by the assembly of building blocks like in a Lego design. It is the precise combination of these ‘Lego bricks’ and the way in which they are built that dictates how a cell responds to a given signal. 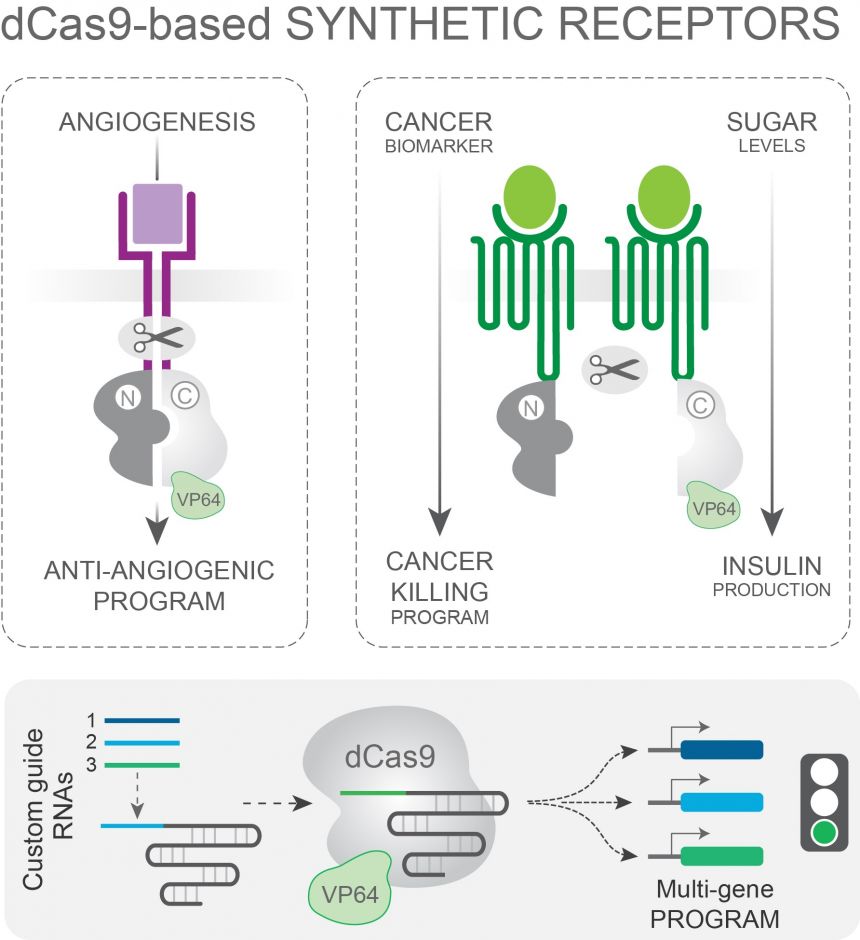 Changing the way cells interact with each other

Rather than using the traditional CRISPR/Cas9 system, the team used a version of the Cas9 protein that cannot cut DNA. Instead, it switches on specific genes, depending on the guide RNA (navigation system) it is associated with. Using this approach, the researchers altered the Lego bricks to build a new class of synthetic receptors, and programmed them to initiate specific cascades of events in response to a variety of distinct natural signals.

So could this innovative cellular tinkering improve human health? To answer this question, the team sought to re-program the way in which cancer cells respond to signals that drive the production of new blood vessels (a key step in cancer development). Using a rationally designed synthetic receptor they created in the lab and delivered into cells in a dish, the team converted a pro-blood vessel instruction into an anti-blood vessel response. To test the limits of the system, they then went on to engineer a receptor complex that responds to a signal enriched in the tumour environment by eliciting simultaneous production of multiple ‘red flags’ (effector molecules) known to attract and instruct immune cells to attack cancer. These initial experiments in the lab open up a whole range of possibilities for next-generation cancer therapy.

The system also has potential applications for other systemic diseases, like diabetes. To demonstrate this potential, the team engineered another receptor complex that can sense the amount of glucose in the surroundings and prompt insulin production – the hormone that takes glucose up from the blood stream. In people with diabetes, this mechanism does not work correctly, leading to high levels of glucose in the blood. While a long way from the clinic, the work suggests that this technology could be used to rewire the way that cells in the body function.

The ability to edit the human genome has transformed the way scientists approach some of our biggest medical challenges. With this new technique developed in Oxford, the team hopes that genome engineering does not have to be limited to correcting DNA faults but altering the way that cells work – regardless of the root cause of disease.

The origin of the first genomes
Artistic Licence: Meet the undergrad helping refugees study in Oxford