Dr Fredi Otto: the young Oxford professor of climate research is frankly...terrifying. It’s not her, she could not be nicer; it’s what she says...what were concerns over the impact on climate change, are understood realities – and, she says, it is costing thousands, perhaps millions, of deaths globally every single year.

Dr Friederike Otto could not be more self-effacing and pleasant, answering obvious questions politely with patience and apparent interest. And yet the young Oxford professor of climate research is frankly...terrifying. It’s not her, she could not be nicer; it’s what she says. Over the last handful of years, major advances have meant that what were concerns over the impact on climate change, are understood realities. And, she says, it is costing thousands, perhaps millions, of deaths globally every single year.

What were concerns over the impact on climate change, are understood realities – and, says Dr Friederike Otto, it is costing thousands, perhaps millions, of deaths globally every single year

A six-year-old YouTube video of Fredi, as she is universally known, shows a fresh-faced postgraduate researcher telling an audience that deadly extreme weather events may be linked to climate change. Today, she may still be fresh faced, but there is no ‘may’ about it.

Thanks to advances in weather observations and computer modelling-based research by Dr Otto and her team, they now have the data. Previously, climate predictions tended to be based on one model. Now, she and her team use hundreds, thousands of simulations of models - using supercomputers and individuals who lend their processing power. The use of very different models, high-quality observations and experience of many studies has led to her saying with certainty that climate change is behind more than one-in-three deaths from heat. She says, ‘Climate change makes hot extreme events [such as heatwaves in Europe] 100 times more likely.’

‘And we’re not talking about a bit of nice weather either,’ says Dr Otto. ‘The last heatwave in the UK caused 2,500 excess deaths.’

Climate change makes hot extreme events [such as heatwaves in Europe] 100 times more likely...And we’re not talking about a bit of nice weather either. The last heatwave in the UK caused 2,500 excess deaths

Two thousand five hundred deaths...from heat in this country. Imagine how many more people are affected internationally; in hot countries - where extreme events are not even recorded. But how does she know that the increased numbers of extreme events are anything to do with climate change?

‘Using multiple computer models, we compare weather under current climate conditions with a hypothetical world without industrialisation. It’s our world, but without greenhouse gas. We see 1.2º global warming – half of which can be seen in the last few decades....the question is never whether this is caused by climate change, yes or no...There are more frequent extreme events now but heatwaves are the game changer...with all other extreme events, such as flooding, there might be some casualties, but with heatwaves there are always deaths.’

In a typically terrifying aside, Dr Otto says quietly, ‘There are no figures for many parts of the world. We don’t have the global excess mortality data, but 37% of deaths from heatwaves over the last 30 years have been caused by climate change. And that is a conservative estimate.’

There are more frequent extreme events now, but heatwaves are the game changer...with heatwaves there are always deaths

She adds, ‘We will get hotter. Heatwaves are a huge problem and we don’t take them seriously enough....awareness is still very limited compared with flood risk.’

Dr Otto and her team are working at the forefront of climate science and she is highly sought-after for comments on every weather event. Earlier this month, she was quoted in media everywhere, talking about the impact of climate change on the French grape harvest [not good] and more recently she has been sought for comments about the heatwave currently affecting the north-west coast of North America. Dr Otto has also issued warnings about the lack of tracking of extreme heat events in Africa [really bad] and talked about the climate-linked cost of Hurricane Harvey [huge].

She is all-too-aware of the international politicisation of concerns over climate, ‘It’s a left/right issue, which is not helping.’

Dr Otto maintains, ‘It’s better in the UK, not so polarised...but global net zero goals will only work if all countries act.' 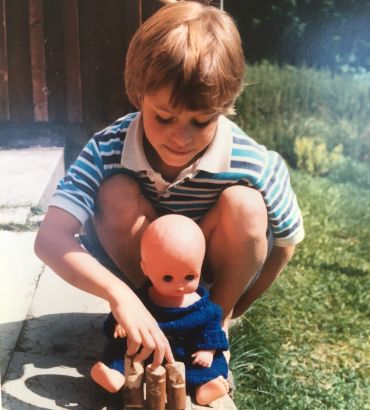 Five-year-old Fredi.
But the serious academic did not have a very serious start to her academic life – and was certainly not interested in climate. In fact, in an inspiring admission for aspiring academics who are struggling at school, she says she was not a very good pupil.  She was interested in History and Literature, ‘I would have loved to study History.’

'I hated school,’ says Dr Otto. ‘I tried to be there are little as possible.’

But, because of the German education system, and her poor school record, Dr Otto was not able to apply to study such a ‘popular’ subject as History at university. And she was obliged to take either Physics or Engineering – the least popular subjects.

Arriving at Potsdam University, she studied Physics – and was originally very interested in quantum theory. Nevertheless, she also took the only option in climate, ‘basically meteorology not climate change,’ and did not find it very interesting at all. She stuck with quantum physics and also started studying philosophy.

She left Potsdam to take a PhD at a nearby university in Berlin. Increasingly, her interest was captured by the philosophy of science – what it means to be a scientist and what it is that makes science science. And this still underpins her work today, she says.

‘We ask if an event [a flood] is caused by climate change – does this really mean looking at the change in one day’s rainfall or actually the management of rivers...there is always a trade-off. We don’t have observations of all of reality, but these questions are not asked in climate science,’ she says.

Dr Otto is clearly determined to bring attention to the damage wrought by climate change in terms of extreme events. And she is excited by the research into climate finance and net zero pledges (from countries, business and organisation). Both are essential, she says, in the battle to reduce the deadly impacts of climate change. But the scientist is sanguine about whether the pledges will turn into reality, ‘They’ve talked the talk now let’s see them walk the walk.’

One of her students, has been following attempts to bring climate change claims against companies and governments through the courts. The impact could be enormous, says Dr Otto, who talks positively about the prospect of litigation forcing bodies into honouring their climate change pledges, ‘If countries are forced to act and show that they can transform, others will follow.’

She maintains, ‘The legal route will not be the only one, to solve problems. But there could be a ripple effect, [after a court ruling] and governments will do more...But it is especially important for companies to show they are doing something...and a lot of companies have more power than nation states.’

Big national polluters may not care about court rulings or international pressure, says Dr Otto, but ‘we need global net zero not just the UK’ and they do care about ‘money and global markets’

Big national polluters may not care about court rulings or international pressure, says Dr Otto, but ‘we need global net zero not just in the UK’ and they do care about ‘money and global markets’.

She points out, ‘If the European market has strict regulations for importing goods with carbon content, this could be an important factor...and finance is another. Right now, central banks are looking at climate risk.’

It is 10 years, to the day, since the young Dr Otto came to Oxford as a post-doctoral researcher without an employment contract. Now, she is Associate Director of the Environmental Change Institute and Associate Professor of the Climate Research Programme. And she insists, Oxford is ‘a fantastic place to work’.

‘You meet all sorts of people who work here and who come here. And from day one I had the absolute freedom to research what I found interesting as long as I could find the funding.’

People thought I was a weirdo doing something that scientists shouldn’t...a lot of people want to work with me now

She talks warmly of her own graduate students, about whose research she is wholly supportive and enthusiastic, ‘Freedom has benefits and everyone here tries to help and support you, especially the admin staff. It’s completely different from universities elsewhere.’

Reflecting on her journey and the rapid development of climate change science, Dr Otto says, ‘People thought I was a weirdo doing something that scientists shouldn’t...a lot of people want to work with me now.’