Illustration of Orobanche minor var heliophila in its typical habitat

Broomrapes are sap-sucking ‘plant pilferers’ that steal their food from the roots of other plants, their so-called ‘hosts’. In this case, the new variety they name Orobanche minor var. heliophila has a peculiar affinity for Ikea and Tesco carparks! 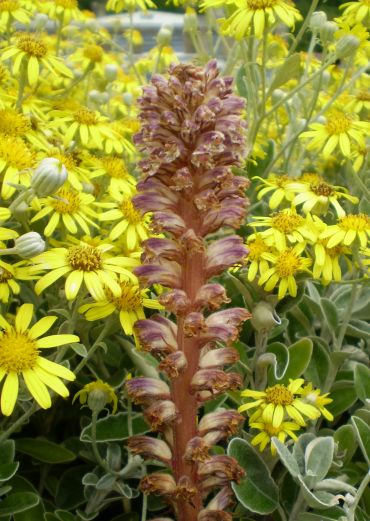 The sinister looking ‘vampire’ has no leaves, roots or green pigments of its own, and comprises a peculiar purplish flowering spike that juts out of the ground.

The reason the newly discovered variety has an affinity for this somewhat surprising habitat is linked to its penchant for a particular shrub called Brachyglottis × jubar 'Sunshine' that is often planted in shop carparks – and the occasional service station too –  enabling the parasite the thrive there.

It also grows in amenity plantings in parks, gardens and along sea fronts. The botanists named the new variety after its host, heliophila, meaning ‘sun-loving’. Although the plant is a parasite, it poses no threat to plants it feeds on and is not dangerous or harmful.

The scientists examined a range of features in great detail, for example the anatomy of the roots, floral parts, colour, ability to regenerate (perennation) – and its ability to grow on different host plants.

Parasitic plants, like broomrapes, have aroused curiosity for centuries yet they remain one of the most poorly understood groups of all the flowering plants.

Together, these data indicate that the newly described variety is a race that is distinct from other forms of the plant that are well known to science. The new variety occurs throughout Britain, especially in the south and southeast, but it is unknown when it evolved because its host (Brachyglottis) was introduced to the UK after 1910 from New Zealand. It is possible that a shift in host has taken place from native vegetation to the cultivated shrub, following the widespread introduction of Brachyglottis for amenity planting in recent decades.

Parasitic plants, like broomrapes, have aroused curiosity for centuries yet they remain one of the most poorly understood groups of all the flowering plants. Indeed much of their evolutionary biology and life history remains a mystery.

There are over 4,000 species of parasitic plant and they occur in all major ecosystems from tropical rainforests to arctic tundra, and new species are discovered every year. Because they derive nutrition from their hosts, some have lost the features typical of most plants, for example green leaves, stems and even roots. Botanists previously relied on such features to classify plants, and so the evolutionary relationships among these parasites have long remained unclear.

The scientists’ latest research featured here shows that broomrapes appear to be forming new species by switching hosts, but the process has gone largely unnoticed because they look so similar. It goes to show that you don’t have to go to a remote tract of rainforest to discover new plant life – new species can be hiding in plain sight. Next time you do the shopping or refill the car, look carefully at the shrubbery and you may well spot a ‘vegetable vampire’ at your feet…

Dr Chris Thorogood is Deputy Director and Head of Science for Oxford Botanic Garden and Arboretum and lecturer at the Department of Plant Sciences. His research focuses on speciation (the formation of species) in tropical pitcher plants and parasitic plants; the floral diversity of biodiversity hotspots such as the Mediterranean Basin and Japan; and biometic applications in plants. He is a fellow of Linacre College.

The new variety was published in the journal British and Irish Botany, and the original article can be seen here: https://britishandirishbotany.org/index.php/bib/article/view/54