Patient recruitment is on-track in the Oxford-led DeTACT trial of safe, effective drug combinations to prevent the spread of artemisinin and multi-drug resistant malaria in Africa.

The global fight against malaria is at a critical point. Overall progress has now stalled and even worsened in some countries in Africa, where most of the world’s 627,000 deaths from malaria occurred in 2020.

The situation is becoming grave with recent studies confirming the growing prevalence in Rwanda and Uganda of P. falciparum malaria parasites partially resistant to artemisinins, which are the most important frontline anti-malaria drugs.

No new antimalarial drugs are expected in the near future. If multi-drug resistant falciparum malaria becomes established in East Africa and spreads to other parts of Africa, it is soon likely to compromise the efficacy of artemisinin-based combination therapies or ACTs — putting millions of Africans at risk of drug-resistant malaria infection and death.

The WHO has said this 'independent emergence of artemisinin partial resistance in the African Region is of great global concern.'

One possible solution — new drug combinations with artemisinins and two other frequently used antimalarial drugs (Triple ACTs or TACTs) — was found in 2020 by the large multi-centre, multi-country TRAC2 study to be highly efficacious even in places where ACTs were failing.

Before TACTs could be widely deployed to control artemisinin-resistance in Africa, however, their efficacy, safety and tolerability would first need to be confirmed in African populations, especially children. 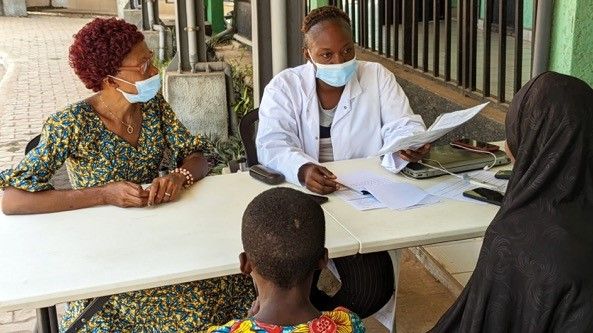 Led by University of Oxford-affiliated researchers based in Bangkok at the Mahidol-Oxford Tropical Medicine Research Unit (MORU), the Developing Triple Artemisinin-based Combination Therapies (DeTACT) trial is currently studying in eight African and three Asian countries two new TACTs to generate evidence that they are effective first-line malaria treatments and support their deployment in Africa to prevent or delay the emergence of artemisinin and multi-drug resistant malaria in Africa.

Funded by UKaid administered through the Foreign, Commonwealth and Development Office (FCDO), DeTACT’s goals are ambitious.

'The emergence of artemisinin resistance in Africa is a serious concern, and its containment is paramount to avoid treatment failures in falciparum malaria in the future. TACTs can be an important contribution to this, both by delaying antimalarial drug resistance to the existing drugs, and by providing an effective treatment for multidrug resistant infections. DeTACT will provide the necessary evidence on TACTs, deliver a product that can be deployed, and will engage with national and global policy makers and other stakeholders to discuss the potential position of TACTs in the mix of antimalarial drugs,' says Professor Arjen Dondorp, the Principal Investigator of the DeTACT.

Besides comparing two existing ACTs (artemether-lumefantrine and artesunate-mefloquine) against two TACTs constituted of one additional drug added to each of these combinations (amodiaquine and piperaquine, respectively), DeTACT is conducting studies to forecast the impact of TACTs on controlling the spread or emergence of multidrug-resistant falciparum malaria leading to its elimination, and to examine the market readiness and ethical considerations of using TACTs across the malaria endemic world.

'The DeTACT Project includes modelling studies that will project the impact and cost-effectiveness of TACTs in preventing the spread of artemisinin resistance, explained Dr Chanaki Amaratunga, DeTACT Project Coordinator.'

'We are also conducting studies with all malaria stakeholders, starting from patients to researchers and policy makers, to elucidate the ethical and market aspects of their deployment. Along with the clinical trial, these studies constitute a comprehensive assessment of the expected advantages and potential barriers to the large scale use of TACTs,' said Dr Amaratunga.

Despite disruptions caused by the COVID-19 pandemic, DeTACT has already recruited over 700 patients, and aims to complete the recruitment of close to 4000 patients by early 2023.

The modelling, ethics and market positioning studies are well advanced and are expected to be completed by the end of 2022.

In addition, MORU has signed a memorandum of understanding with Fosun Pharma and Medicines for Malaria Venture (MMV) to collaborate with them to develop and pre-qualify fixed-dose combinations of TACTs prior to marketing them across Africa and the malaria endemic world.

'The DeTACT Trial will generate data not only on the efficacy and safety of TACTs but also on the pharmacokinetics of each of the drug components, including in malnourished children – a particularly vulnerable sub-population. In addition, there will be cutting-edge analyses, combining clinical trial data with that from whole genome and transcriptome studies, to improve our understanding of artemisinin and other antimalarial drug resistance,' said DeTACT-Africa Coordinator Dr Mehul Dhorda.

'We sincerely thank our partners conducting the field trials for maintaining their commitment to completing the trial in a difficult context,' Dr Dhorda added.

DeTACT is the third of three FCDO-supported multi-country, multi-site trials (TRAC and TRAC2) that have characterised artemisinin resistance and tested multi-drug resistant malaria treatments in South-East Asia. The work related to pharmacokinetics of antimalarials in malnourished children is supported by a grant from the Wellcome Trust.