The Chalgrove Hoard in Oxford's Ashmolean Museum: A new Roman emperor was discovered on one of the coins. 'Like flicking through a pack of cards and finding an 11 of clubs,' said the curator at the British Museum 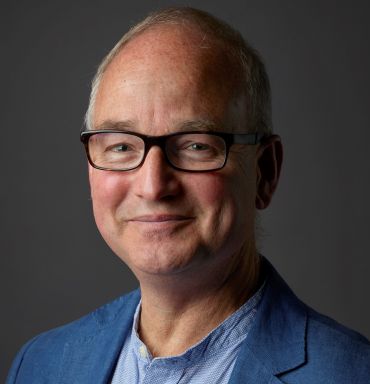 Chris Howgego
Along with colleagues from the Museum and the University, Professor Howgego is clearly very excited by the discoveries and new information which are expected to come from the digitisation of historic currency, currently underway at the Ashmolean and internationally.

Putting objects online is not just a nice-to-have, the Ashmolean’s curators insist, (although it is that). Digitisation is going to transform scholarship, adds Richard Ovenden, the head of Oxford’s Galleries, Libraries and Museums and the 25th incumbent as Bodley’s Librarian.

In terms of money, in particular, the implications could be far-reaching, Professor Howgego says. Not only will it will allow access to currently unseen objects – but more importantly it will also raise new questions and enable new methodologies, throwing a different light on past civilisations and societies, he explains.

With international collections and coin finds being put online, it will be possible for researchers to look in new ways at patterns of behaviour in the past and to work with other institutions to gain a much greater understanding of the ancient world. He says, ‘Digitisation makes ‘big data’ research possible in the Humanities.’

Although much focus on ancient coins comes from newspaper reports of sums raised, when finds are sold at auction, money provides a window into earlier cultures and societies. Professor Howgego’s enthusiasm for the subject is palpable.

If it were needed, the Ashmolean Museum’s 300,000 piece historic monetary collection, is proof positive that you cannot take it with you. It contains items from around the world, which have survived their owners by hundreds, if not thousands, of year. Made up of medals, bank notes and coins (some dating back to before 600 BC) the collection includes original Ming dynasty paper money, and some of the earliest coins ever minted, as well as golden hoards, buried in Oxfordshire, whose owners never returned to claim them.

It's history in your hand

The Ashmolean Museum’s 300,000 piece historic monetary collection is proof you cannot take it with you. It contains items from around the world, which have survived their owners by hundreds, if not thousands, of year

As crypto currencies around the world take a slide, leading many to question what is money, the Ashmolean team is in no doubt of the importance of the collection of which they are custodians.

‘It’s history in your hand,’ says Professor Howgego, of a coronation medal made for the accession of the boy King, Edward VI – and of a Roman gold coin thought to have been minted from gold looted from  the Temple in Jerusalem.

Clearly proud of the collection and the research taking place in Oxford, Professor Howgego reveals there has been a new (2,000-year-old) acquisition for the Ashmolean. It is an unparalleled collection of 1085 gold and silver coins of the Iceni (Boudicca’s tribe): some of these tiny, impossibly brilliant coins, astonishing survivors from late Iron-Age Britain are in a special display in the Money Gallery, shining two millennia after its owners were dead and buried. And these are just a fraction of the historic coins on display and in the Museum’s secure vault behind the scenes.

Oxford’s Ashmolean, the oldest public museum in the world, is home to one of the world’s leading collections of ancient money. It is a resource for academics and experts, increasingly globally, now the collection is being made available online. 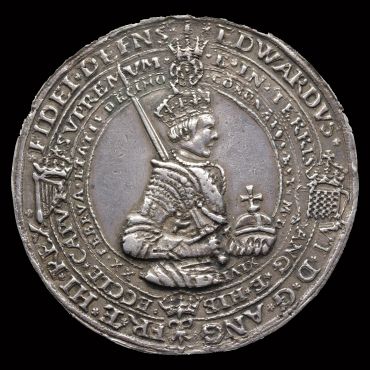 A coronation medal made for the accession of the boy King, Edward VI
Of the 300,000 items, a third have already been digitised, thanks to the efforts of volunteers in Oxford, says Dr Jerome Mairat, who expects to complete the digitisation of the Roman collection in the next few years.

Of the 300,000 items, a third have already been digitised, thanks to the efforts of volunteers in Oxford

The Ashmolean’s collection may be worth a fortune but, says curator Dr Shailendra Bhandare, its real value is as a record of the past. He explains, money has been made of metal, stone, shells, cloth and even rice – whatever is of value to the society. And the coins and notes tell much about the societies which created them, the development of the civilisations and trade – and war.

One of the ‘highlights of the collection, is the Oxford crown, struck during the English Civil War, in Oxford’s brief time as Charles I’s capital city. There are only about ten in existence, and two are in the Ashmolean. They were made in a mint in New Inn Hall Street.

Meanwhile, a new Roman emperor was discovered, found in hoard at Chalgrove, only 12 miles away.

‘They were dancing the conga at the British Museum when it was identified,’ recalls Professor Howgego. The curator who discovered it said it was so surprising that ‘It was like flicking through a pack of cards and finding an 11 of clubs.’

The coins themselves were often designed as records, rather than just being of monetary value, says Professor Howgego – used by rulers to put their stamp, quite literally, on history. From the images of short-lived Roman emperors, to pictures of Noah’s Ark, coins have been used to make statements – and not just in terms of the legality of tender.

The Coin Hoards of the Roman Empire Project, based in the Ashmolean, leads a collaborative international effort to preserve digitally this compelling form of national heritage. It has currently put online over 16,000 hoards containing a staggering eight million coins. The Roman coins that turn up today across Europe and Asia reveal the integrated nature of the Roman Empire – and its impact on neighbouring civilisations, such as India, where huge numbers of Roman coins have been found. 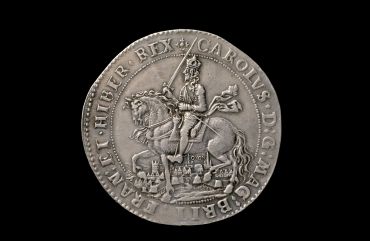 An Oxford Crown
Professor Andrew Meadows, a professor of Ancient History and a specialist in Greek coins, is anticipating considerable discoveries from digitisation and is leading a major study of Greek coinage.  He says, ‘Coinage became a world-wide phenomenon because of the Greeks...We’ll be mapping the Greek world through the coins [that are held in collections all over the world and are now online]...we’ll be looking at where coins come from and approximate figures for which places are heavily monetised and which are less so....it will enable us to understand what drove commerce in the first four or five centuries after coinage was invented.’

You couldn’t buy a loaf of bread with one of the coins...It could be worth a week’s earnings

He says, we already know the first coins emerged in the Greek province of Lydia in what is now Turkey. But the coinage was not then, he explains, about facilitating trade and coins were not used by most people.

‘You couldn’t buy a loaf of bread with one of the coins,’ he says, holding a chunky gold piece. ‘It could be worth a week’s earnings.’

It is thought, he says, coins were created by rulers in order to pay soldiers to fight in wars, rather than to facilitate trade – although they did that as well.

Digitisation of ‘history in your hand’ is set to transform research.