The 17 newly studied craters and depressions are located near the South Pole. Their sizes range from 0.18 to 54 square kilometres. Region 9 is not located in the section of the south polar region shown here, but a bit further to the North, in the Schrödinger Basin. credits: MPS/University of Oxford/NASA Ames Research Center/FDL/SETI Institute

The Moon’s polar regions are home to craters and other depressions that never receive sunlight.  Permanently shadowed lunar craters contain water ice but are difficult to image. An AI algorithm now provides sharper images, allowing us to see into them with high resolution for the first time.

Near the lunar north and south poles, the incident sunlight enters the craters and depressions at a very shallow angle and never reaches some of their floors, Dr. Valentin Bickel, MPS.

Today, a group of researchers led by the Max Planck Institute for Solar System Research (MPS) in Germany, supported by the University of Oxford and the NASA Ames Research Center, have taken a closer look at some of these regions and presented the highest-resolution images to date covering 17 such craters in the journal Nature Communications.

Craters of this type could contain frozen water, making them attractive targets for future lunar missions, and the researchers focused further on relatively small and accessible craters surrounded by gentle slopes.  Three of the craters have turned out to lie within the just-announced mission area of NASA's Volatiles Investigating Polar Exploration Rover (VIPER), which is scheduled to touch down on the Moon in 2023.

Imaging the interior of permanently shadowed craters is difficult, and efforts so far have relied on long exposure times resulting in smearing and lower resolution.  By taking advantage of reflected sunlight from nearby hills and a novel image processing method, the researchers have now produced images at 1-2 meters per pixel, which is at or very close to the best capability of the cameras.

The Moon is a cold, dry desert. Unlike the Earth, it is not surrounded by a protective atmosphere and water which existed during the Moon’s formation has long since evaporated under the influence of solar radiation and escaped into space. Nevertheless, craters and depressions in the polar regions give some reason to hope for limited water resources.

'Near the lunar north and south poles, the incident sunlight enters the craters and depressions at a very shallow angle and never reaches some of their floors', MPS-scientist Dr. Valentin Bickel, first author of the new paper, explains. In this "eternal night," temperatures in some places are so cold that frozen water is expected to have lasted for millions of years. Impacts from comets or asteroids could have delivered it, or it could have been outgassed by volcanic eruptions, or formed by the interaction of the surface with the solar wind.

'With the help of the new HORUS images, it is now possible to understand the geology of lunar shadowed regions much better than before, Ben Moseley', Oxford University.

However, permanently shadowed regions are not only of scientific interest. If humans are to ever spend extended periods of time on the Moon, naturally occurring water will be a valuable resource - and shadowed craters and depressions will be an important destination.

NASA's uncrewed VIPER rover, for example, will explore the South Pole region in 2023 and enter such craters. To get a precise picture of their topography and geology in advance - for mission planning purposes, for example - images from space probes are indispensable. NASA’s Lunar Reconnaissance Orbiter (LRO) has been providing such images since 2009.

However, capturing images within the deep darkness of permanently shadowed regions is exceptionally difficult; after all, the only sources of light are scattered light, such as that reflecting off the Earth and the surrounding topography, and faint starlight. 'Because the spacecraft is in motion, the LRO images are completely blurred at long exposure times,' explains Ben Moseley of the University of Oxford, a co-author of the study.

At short exposure times, the spatial resolution is much better. However, due to the small amounts of light available, these images are dominated by noise, making it hard to distinguish real geological features. To address this problem, the researchers have developed a machine learning algorithm called HORUS (Hyper-effective nOise Removal U-net Software) that "cleans up" such noisy images.

It uses more than 70,000 LRO calibration images taken on the dark side of the Moon as well as information about camera temperature and the spacecraft's trajectory to distinguish which structures in the image are artifacts and which are real. This way, the researchers can achieve a resolution of about 1-2 meters per pixel, which is five to ten times higher than the resolution of all previously available images.

Using this method, the researchers have now re-evaluated images of 17 shadowed regions from the lunar south pole region which measure between 0.18 and 54 square kilometers in size.

In the resulting images, small geological structures only a few meters across can be discerned much more clearly than before. These structures include boulders or very small craters, which can be found everywhere on the lunar surface. Since the Moon has no atmosphere, very small meteorites repeatedly fall onto its surface and create such mini craters.

Because the spacecraft is in motion, the LRO images are completely blurred at long exposure times, Ben Moseley, Oxford University.

'With the help of the new HORUS images, it is now possible to understand the geology of lunar shadowed regions much better than before,' explains Moseley. For example, the number and shape of the small craters provide information about the age and composition of the surface. It also makes it easier to identify potential obstacles and hazards for rovers or astronauts. In one of the studied craters, located on the Leibnitz Plateau, the researchers discovered a strikingly bright mini-crater.

‘Its comparatively bright color may indicate that this crater is relatively young,’ says Bickel. Because such a fresh scar provides fairly unhindered insight into deeper layers, this site could be an interesting target for future missions, the researchers suggest.

The new images do not provide evidence of frozen water on the surface, such as bright patches. “Some of the regions we've targeted might be slightly too warm," Bickel speculates. It is likely that lunar water does not exist as a clearly visible deposit on the surface at all - instead, it could be intermixed with the regolith and dust, or may be hidden underground.

To address this and other questions, the researchers' next step is to use HORUS to study as many shadowed regions as possible. ‘In the current publication, we wanted to show what our algorithm can do. Now we want to apply it as comprehensively as possible,’ says Bickel.

This work has been enabled by the Frontier Development Lab (FDL.ai). FDL is a co-operative agreement between NASA, the SETI Institute (seti.org) and Trillium Technologies Inc, in partnership with the Luxembourg Space Agency and Google Cloud. 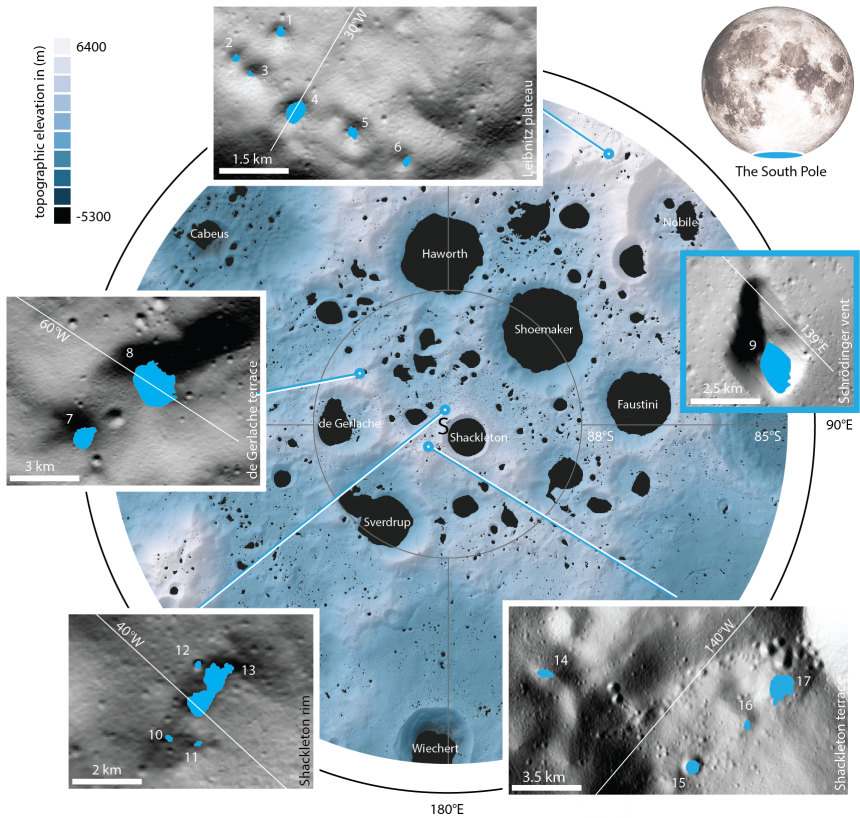 The 17 newly studied craters and depressions are located near the South Pole. Their sizes range from 0.18 to 54 square kilometres. Region 9 is not located in the section of the south polar region shown here, but a bit further to the North, in the Schrödinger Basin. credits: MPS/University of Oxford/NASA Ames Research Center/FDL/SETI Institute